The SPAC Bubble Is About to Burst in Spectacular Fashion

The No. 1 investment trend of 2020 is still booming and is now on pace to smash its previous record set last year for cash inflows.

SPAC mania isn’t going anywhere anytime soon. Irrational exuberance is spiking sharply in this section of the market. I see numerous warning signs telling me this bubble is going to burst in spectacular fashion and soon.

Some recent data compiled on SPACs sheds light on why that is.

Last year, everything changed. In total, SPACs raised $83 million in 2020. This year we’re on pace to double that.

According to SPACInsider, SPACs have raised over $38 billion so far this year. This puts us on pace for SPACs to raise $150 billion or more in 2021. The sheer amount of money getting pumped into these “blank check” companies right now is mind-boggling.

This week, between March 15 and 16 alone, nine SPACs opened for trading. NINE!

There’s no way this will end well for a lot of folks who are chasing these types of investments.

The narrative I just laid out before us can be summed up best by one of my favorite charts of all time. It's a chart that explains how irrational exuberance and excitement in a new idea, opportunity, technology, or trend plays out over time. Meet the Gartner Hype Cycle: 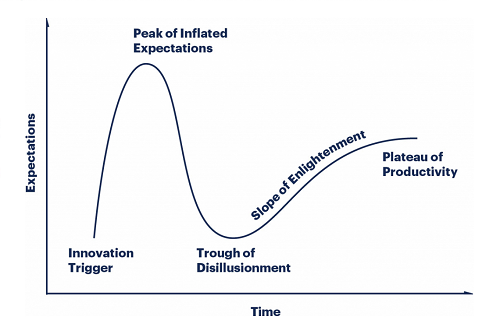 The sharp increase in the amount of cold hard cash flooding into SPACs — and the fact that it’s expected to double this year — indicates we’re reaching the “peak of inflated expectations” for SPACs.

According to Gartner’s chart, the bubble is certain to burst soon. The “trough of disillusionment” and a massive correction await.

You Can Take That to the Bank

I’m as much of an optimistic speculator as an investor can be. I’m a few decades away from retirement, I have some expendable income, and I want large returns as fast as I can make them.

And full disclosure, I even currently own shares of one particular SPAC, which I love, and I'm up considerably... nearly 70% in two months. I plan to hold onto this company for a while. It’s a rare diamond of a stock in the SPAC landscape.

But this company is the exception to the norm, and it took me weeks of research before I felt confident enough to make my move, as well as recommend it to subscribers of Christian DeHaemer’s Bull and Bust Report.

I suspect the much larger majority of SPACs that have debuted on various exchanges over the past 12 months — and the ones that will IPO this year — will offer investors minuscule returns, and many people will probably wind up in the red with their SPAC investment. 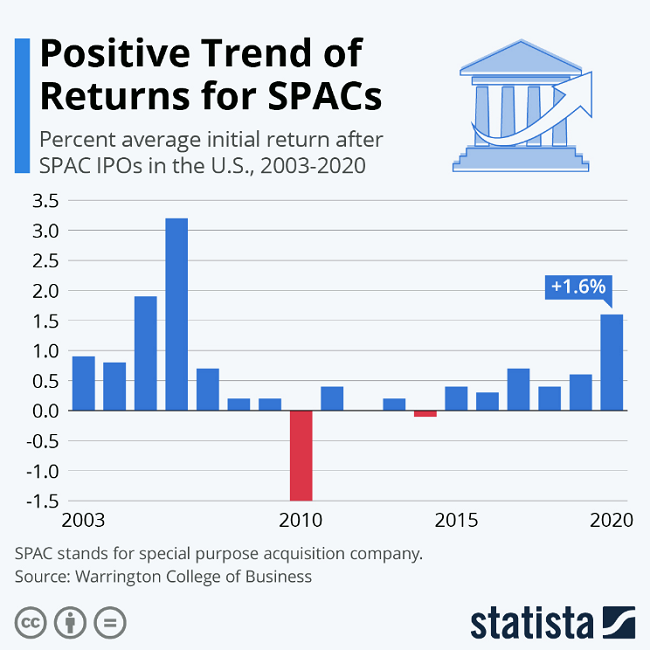 Look, if you trust your own research or the research of your financial adviser and have money in a SPAC already, don’t panic. Like me, you may have staked your claim in one of the handful of SPACs that should actually offer great returns. DraftKings (NASDAQ: DKNG) is a prime example of a SPAC with tons of upside.

But for the large majority of folks who have dumped their money into SPACs blindly without looking at the wider investment landscape, the gig is up. I'm talking about folks like my lawyer friend who dumped $10,000 into Bill Ackman’s Pershing Square Tontine Holdings (NYSE: PSTH) about a month ago.

For his sake, I hope PSTH acquires Stripe, an Irish-American financial services and software company dual-headquartered in San Francisco, California, and Dublin, Ireland, and not some of its other rumored targets.

Which leads me to another issue with SPACs that should push the sector even closer toward a spectacular crash. The number of quality companies that are looking to go public via SPAC is dwindling. Most of the quality companies have already finalized their mergers. It’s slim pickings for newly listed SPACs still looking to strike a deal with private businesses strong enough to profit in the publicly traded market.

The bottom line is if you missed out on the SPAC craze, at this point in the trend, that's a good thing. Excluding the select few companies that have acquired strong businesses already, I expect the SPAC bubble will burst and soon. And it could be an excruciatingly painful slide to the bottom if you let FOMO rule your trading and jump in now.

P.S. When one sector falls, others often rise. And with rumors of a multitrillion-dollar infrastructure bill in the works from President Biden’s administration, my colleague Keith Kohl has a great company for you to invest in right now. Learn more here.