It means environmental, social, and corporate governance, and it's something we’ve been using to identify companies that are incorporating such things into their operations.

This, of course, is something I’ve been covering since before “ESG” even became a thing, ultimately becoming hijacked by corporate bullies with Ivy League degrees and those so far to the left they’ll attempt to shut down an entire company if the CEO misgenders someone.

It’s unfortunate, as the concept of ESG is sound.

Make no mistake: Companies can incorporate ESG fundamentals while still maximizing profits for shareholders. The two don’t have to be diametrically opposed. In fact, when done right, incorporating some of these concepts can actually help companies lower operating costs, attract and retain the best talent, and help gain consumer loyalty.

Back in 2006, when I first started writing about ESG — and investing in companies that have integrated ESG into their operations — such a concept was relatively unknown or completely dismissed as tree-hugging nonsense.

I, of course, reject that argument and have been very fortunate to use ESG principles to help me create wealth for myself and for my thousands of readers.

This is particularly true in the case of Tesla (NASDAQ: TSLA), which I recommended as a buy right after it went public.

Tesla was a groundbreaking company that I posited would launch a transition away from internal combustion and toward vehicle electrification. My hunch was correct, and as you can see, that hunch paid off… 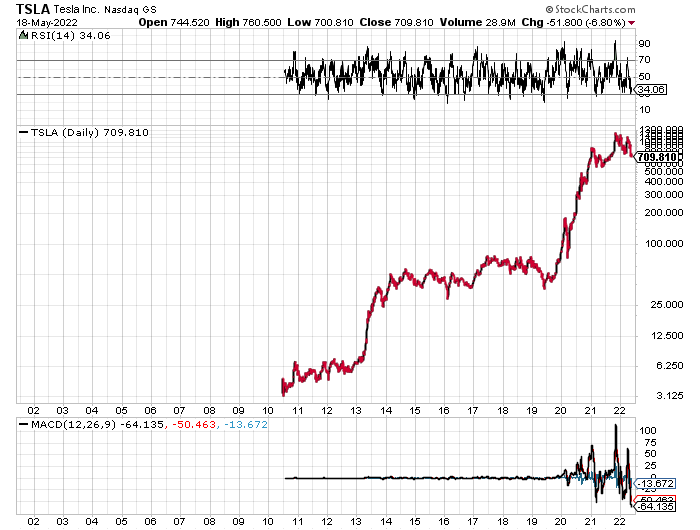 In 2007, before Tesla even went public, I was singing the praises of this company and its CEO Elon Musk.

Not only is the internal combustion engine an outdated technology that will ultimately go the way of the rotary phone and telegraph machine, but the integration of electric vehicles would bring about a significant displacement of oil — something that has absolutely decimated our natural capital and been the cash cow for dictators and terrorists across the globe.

Make no mistake: Weaning ourselves off of oil is not only an environmental imperative but geopolitical and economic ones as well.

Sadly, this reality has been lost on a generation of fake social justice warriors and spoiled rich kids who believe capitalism is the root of all evil and that billionaires should be vilified.

Today, Elon Musk has become a punching bag for the far left because he spoke out against unions, mask mandates, and burdensome tax structures that penalize innovation instead of supporting it.

He’s not the only one, of course. But for some reason, he’s been designated by the gatekeepers of wokeness as the bad guy capitalist pig. Never mind all the things he’s done to make this world a better place for all of us, regardless of political affiliation.

I’d even be willing to suggest that the reason Tesla was recently removed from the S&P 500 ESG index is because it was pressured by the ESG sentries who have no fundamental understanding of what ESG is even supposed to be about.

You see, on Tuesday, it was announced that Tesla no longer qualifies for inclusion in the S&P 500 ESG index, partly because it lacked a low-carbon strategy.

The company single-handedly instigated the transition away from internal combustion to vehicle electrification, which will do far more to reduce carbon emissions than some manufactured dictate labeled as a “low-carbon strategy,” but I guess that doesn’t matter.

Interestingly, Exxon did make it into the index.

You know, the company that spent millions destroying the Earth and manipulating policy so it could treat the planet like a fucking toilet and get away with it.

According to a spokesperson for the index, Tesla’s codes of business conduct, along with poor working conditions, also affected its score.

Of course, this begs the question: If the working conditions are so bad at Tesla, why do so many people want to work there? And why have so many people been employed by Tesla for so long?

Indeed, it’s a very stressful environment. Even Musk, who slept on the floor of his manufacturing facility while trying to get the company off the ground, admitted that it’s not an easy place to work. But the payoff is being a part of something bigger than oneself — a reality, I fear, is lost on a generation of folks who complain that mental health days should be mandated by the government and 40-hour workweeks create a “hostile work environment.”

It is worth sharing, however, that Amazon, which has been brought up on far more egregious working condition charges than Tesla, did manage to make the S&P ESG index.

You see, because Tesla is the only major car company with the balls to build and test autonomous vehicles, it has had to deal with the downside of being first — which, in this case, is the fact that there be injuries and fatalities.

To put this in perspective, though, once this autonomous vehicle technology is perfected, it will end up saving countless lives — far more than will have been lost during these early days of testing.

According to the Department of Transportation, fully autonomous vehicles could reduce traffic fatalities by up to 94% by eliminating accidents due to human error.

It's also worth noting that some of the fatalities stemming from Tesla’s autonomous vehicles were the result of human error because those drivers were instructed to stay alert and keep their hands on the wheel at all times, as these vehicles are NOT fully autonomous.

Here’s a segment of the Autopilot instructions that are shared with Tesla owners:

While using Autopilot, it is your responsibility to stay alert, keep your hands on the steering wheel at all times, and maintain control of your car. Many of our Autopilot features, like Autosteer, Navigate on Autopilot, and Summon, are disabled by default. To enable them, you must go to the Autopilot Controls menu within the Settings tab and turn them on.

But I guess that’s not enough for the masters of the S&P 500 ESG index.

Of course, while I find the S&P’s vulgar and faulty analysis of what ESG is and how it should be rated, it really doesn’t matter.

Not being included in this index will have no effect on Tesla’s ability to create value for customers and shareholders.

After all, Tesla launched an electric car company at the height of the Great Recession while battling internal combustion apologists who, at the time, were mostly conservative media pundits who did everything they could to discredit Musk, Tesla, and electric cars in general.

Tesla still came out on top, so this recent exclusion from the S&P ESG index won’t even make a dent in Tesla’s progress.

The only thing it’s really done is piss me off and reconfirm my suspicion that this honorable ESG idea has been appropriated by the same types of people who mocked it when it first became worthy of discussion.

Truth is, if you want to invest in a socially responsible manner, you don’t need to follow some random ESG index anyway. Just ask yourself one simple question: Is this company making the world a better place — environmentally, socially, and economically?

If your response is yes, then you have your answer.

While it may not be as convoluted as the S&P’s analysis, it is honest, straightforward, and sincere, and it will also validate Tesla as an ESG leader.