The Reason Gold Is Not Reacting Positively to Falling Markets

Yesterday, markets suffered their worst day since the Black Monday crash of 1987, as coronavirus panic continued to grip investors, triggering the second trading halt of the week.

How bad is it? Seven of the top 10 largest daily point drops in the Dow have occurred over the past three weeks! 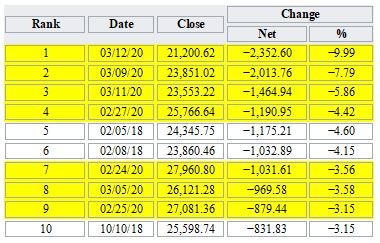 The CBOE Volatility Index (VIX), used to measure the level of fear, risk, and stress in the market, reached levels yesterday not seen since the financial crisis of 2008, as global markets continued to melt down.

Meanwhile, the price of gold fell by more than $60 yesterday to under $1,580 an ounce, leaving many scratching their heads and wondering why.

Gold is traditionally seen as a safe haven during times of economic distress. And you'd think with so much fear and panic in the market gold would be soaring. But it's not. Why?

Other times, however, they sell gold during economic stress to raise cash.

In other words, they cash in on the safety net. And that's exactly what we're seeing right now.

Investors are selling gold in order to raise capital to meet margin calls in the stock market. And this isn't the first time we've seen this.

Throughout the economic wobbles of the 1970s, gold was certainly seen as an important safe-haven asset, with many investors buying. This is evident from rising prices through the turbulent times of the decade.

But then, following the Black Monday crash of 1987, investors weren't buying more gold as a hedge; instead, they used it as an easily liquidated asset they'd already bought. The price of gold initially increased after the '87 crash — but only for a very short period of time. Senior reporter for Kitco Allen Sykora writes:

The metal [gold] is a safe haven, but sometimes it also acts as an ATM machine as investors make withdrawals to raise money. After initially soaring on Black Monday, gold then fell for the rest of the day and the next as investors sold whatever assets they could to generate cash.

Throughout the 2000s, gold was again being bought as a safe-haven asset in the face of 9/11, rising oil prices, and the housing bubble, which led to the financial crisis of 2008. And again, this is evident by rising gold prices through the turbulent times.

But coming out of the crisis, and with markets back on track, there was no desire to buy gold as a safe haven. And with gold's pullback from almost $2,000 an ounce in 2011 to nearly $1,000 an ounce in 2016, gold seemingly lost a good bit of its safe haven credentials. By 2018, there was a lot of debate over gold's safe-haven status.

Right now, gold is still suffering a bit from that loss of safe-haven credentials. But mostly what we're seeing is panic selling. Investors are simply selling their gold in order to raise capital to meet margin calls in the stock market.

But there is some light at the end of the tunnel for gold. Energy and Capital's Samuel Taube writes:

So, if you're long gold, we recommend sitting tight. If you don't own gold already, you might want to pick some up on the dips.