The Racist History of the FDR Dime

Let's face it: Minorities have been royally screwed over in the past. They've gotten the shitty end of the stick for millennia.

Here in the United States, black folks were once considered only three-fifths of a human being. Meanwhile, women have only been allowed to vote in 40% of American history.

If I were a minority, I might be pissed off at the discriminatory nature of history myself.

But we need to be very careful to keep our emotions over prejudice in check. And that's because the very facts of history are at stake.

One story that perfectly shows how historical facts have been skewed by emotions over prejudice is that of the FDR dime. 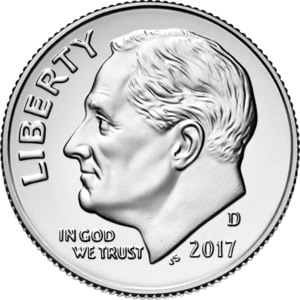 The FDR dime was introduced in 1946 to commemorate the passing of President Roosevelt, who died while in office just a year earlier. It replaced the mercury dime, which had been minted since 1916.

At the time the FDR dime was introduced, there was quite a bit of controversy surrounding it. Among those controversies was an allegation that the dime's designer, John Sinnock, copied or borrowed the Roosevelt profile from a bronze bas relief of FDR created by African-American sculptor Selma Burke for the coin's obverse.

Seen below, Burke's bas relief was sculpted in 1944 and unveiled in September 1945 at the Recorder of Deeds building in Washington, D.C., where it still hangs today. 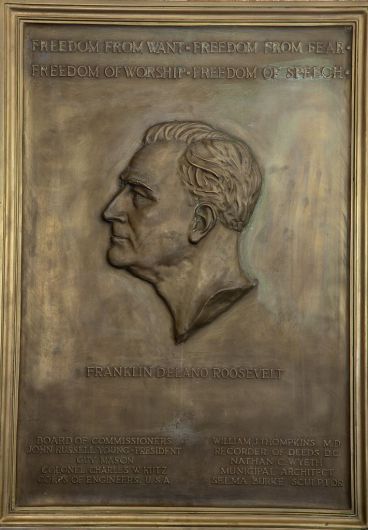 The exact origin of this claim is currently unknown to this writer. But whether or not it was Burke who first made the accusation, it's clear she was very unhappy with Sinnock and felt she deserved the credit for the design.

In a special tribute to the sculptor presented to the 103rd Congress in 1994, writer Steven Litt reported:

Selma Burke, 93, has earned more honors in her long career than many other 20th-century American artists. She first garnered attention as a sculptor in the Harlem Renaissance, the burst of art, music and literature by blacks in New York during the 1920s and '30s. She later studied in Europe, founded an art school in New York and an art center in Pittsburgh, and was awarded nearly a dozen honorary degrees.

But one thing eludes her. It is credit for the portrait of Franklin D. Roosevelt that appears on the dime, which was issued by the U.S. Mint in 1946.

The dime bears the tiny initials "JS," which stand for John Sinnock, the former mint chief engraver who, according to Burke, copied a bronze portrait plaque of Roosevelt created by Burke in 1944 for the Recorder of Deeds Office in Washington, D.C.

Officials at the mint say their records show Sinnock deserves full credit for the Roosevelt dime. But Burke isn't convinced. She says that because she is black, she will never get the recognition she feels she deserves.

“This has happened to so many black people,'' she says. “I have never stopped fighting this man and have never had anyone who cared enough to give me the credit.”

Burke and some scholars believe that Sinnock used her sketches and plaques to design the profile of Roosevelt that appears on the dime.

But Brenda Gatling, public information officer for the mint, says "both Ms. Burke and Sinnock did live sittings with the president. Historical records do not bear out Ms. Burke's statements that he copied her design. Those who could have provided eyewitness accounts have long passed on."

But Burke isn't discouraged. "Everybody knows I did it," she says.

In general, Burke's image of Roosevelt is quite similar to the one found on the dime. Both are left-facing profiles that have the same angle of cut on the neck. However, this is where the similarities end.

A close look at both images reveals many subtle differences. Compare the two designs for yourself: 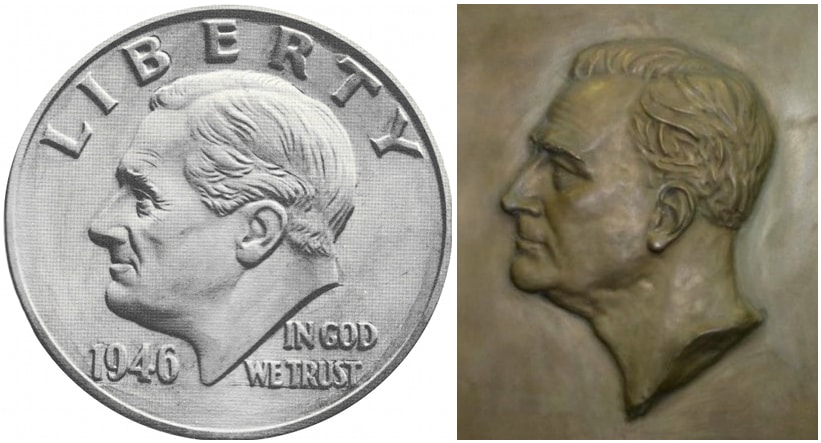 Perhaps the most compelling evidence that Sinnock did not steal from Burke, however, is the fact that he had already created a few different inauguration medals featuring Roosevelt's profile dating back to 1933.

The most notable for this argument is a medal designed by Sinnock for Roosevelt's third inauguration in 1941. The profile of FDR on the 1941 medal is a near copy of one of the initial design sketches Sinnock submitted to the Commission of Fine Arts for comments and approval of the Roosevelt dime obverse design. Compare these two for yourself:

Based on these observations, it seems quite clear to me that Sinnock did not copy from Burke's bas relief for his profile of FDR on the dime. However, in doing some further research into the controversy, I was shocked to find so many who disagree.

Some sources even go as far as to give Burke the entire credit without even mentioning Sinnock. Examples include Burke's obituary as it was printed in the Philadelphia Inquirer:

Selma Hortense Burke, 94, of New Hope, the sculptor who created the profile of FDR used on the dime, died Tuesday at Chandler Hall, a nursing home and hospice in Newtown. The profile was taken from a bronze plaque she had made for a new federal building in Washington. The plaque, unveiled by President Harry S. Truman in 1945, was done from sketches made on butcher paper in a 45-minute session with President Franklin D. Roosevelt at the White House. She later sculpted that image into the profile on the dime.

And her obituary in the Seattle Times:

Selma Hortense Burke, the sculptor who created the profile of FDR used on the dime, died Tuesday at a nursing home and hospice near Philadelphia. She was 94. The profile was taken from a bronze plaque she had made for a new federal building in Washington. The plaque, unveiled by President Truman in 1945, was done from sketches made on butcher paper in a 45-minute session with President Franklin D. Roosevelt at the White House.

The source of Roosevelt’s image on the dime has recently received much attention. John R. Sinnock, the chief engraver at the U.S. Mint, has his initials on the profile. The dime’s head, however, is merely a mirror image of the plaque created by Selma Burke, with the exception of a few detail changes in the arrangement of Roosevelt’s hair. Moreover, the National Archives and Records Administration of the Franklin D. Roosevelt Library in Hyde Park, New York, stated that the dime portrait originated with the sculpture of Franklin Delano Roosevelt done by Selma Burke.

Meanwhile, Encyclopedia.com does not even have an entry for John Sinnock.

Okay, but many if not most of these examples were probably not researched and written by numismatists or experts, but rather people who were just basing their "facts" on what others have previously written.

Surely an organization like the Smithsonian (which claims to be the world's largest museum and research complex) would have done a proper investigation into the matter. Right?

With no mention of the controversy or Sinnock at all, the Smithsonian American Art Museum says of Burke in her biography:

Sculptor and educator who received national recognition for her relief portrait of Franklin Delano Roosevelt, which was the model for his image on the dime.

The fact is, claims that Sinnock copied Burke's work have been racially and politically motivated. The story that a white man working for the government stole from and uncredited an African-American female artist is an attractive anecdote for those looking to push their own agenda.

It doesn't seem unrealistic to suggest that Sinnock used all of the resources available at the time to assist him with the design, which may or may not have included Burke's design. However, it would also seem that Sinnock would not have needed to copy or borrow from Burke, especially considering that he had already created several different profiles of FDR for medals well before Burke's bas relief.

Seeing as Sinnock created his FDR profiles over a decade before Burke's work, one could also suggest that Burke used all available resources for the design of her bas relief, which may or may not have included Sinnock's medals.

Ultimately, I do not see any hard evidence that Sinnock stole from Burke or vice versa. I believe the similarities between Sinnock's dime and Burke's bas relief are the result of two very talented artists creating realistic images of the same man.

The argument over who deserves credit for the obverse design of the Roosevelt dime may never be officially resolved. There seems to be only one person who can say for sure, and that is John Sinnock himself.

Unfortunately, Sinnock died shortly after the release of the Roosevelt dime following an illness of several months in 1947.

Burke lived on, however, claiming she deserves credit for the dime's design until her death in 1995. This gave Burke almost 50 years to tell her side of the story without objection. As a result, the facts of history have been skewed.

We need to be very careful to keep our emotions over prejudice in check, lest we believe lies.