The Prophet of Doom

The IYC Signals the End of the Long Bull

Boom: There it is, the inverted yield curve, the sign of the fiscal apocalypse.

But what is the inverted yield curve, and what does it mean?

Do you remember what 2008 felt like? We were in the depths of the Great Recession, which was gripping the American economy by the throat...

Hundreds of thousands of workers had lost their jobs, packing years of memories in a cardboard box and doing the corporate walk of shame past the receptionist.

The Dow Jones was down by 34% for the year, and it would continue to tumble for months.

The Fed, in a last-gasp Hail Mary play, dropped interest rates to near zero... It was the darkest time of the new millennium.

There were moments where it felt like the world was falling apart and we'd never see prosperity again.

Since then, we've spent almost a decade trying to forget what it felt like.

But now, it's happening again...

Last Friday, on March 22, the yield curve inverted for the first time since 2008.

The IYC is a situation in which market yields on shorter-term U.S. Treasury securities exceed those on longer-term securities. This has been a remarkably consistent predictor of economic recessions.

First, why would you charge less to lend for three months than for 10 years?

And second, why does it cause recessions?

Demand for long-term Treasury bills increase if investors think a stock market sell-off is on the way. They want a safe place for their money to wait out the storm. This pushes the yield down. That is to say that high demand means the government pays less to borrow money.

Short-term rates go up because fewer investors want them so they have to pay more to move the inventory.

This, in turn, causes the yield to be higher for short-term loans than for long-term loans = inverted yield curve. Got it? Good.

According to the St. Louis Fed:

Banks engage in maturity transformation. That is, on average, the loans in a typical bank’s portfolio have a longer term to maturity than the deposits and other funds they use to finance those loans. In essence, banks transform their short-term liabilities (such as deposits) into longer-term assets (such as business and consumer loans).

Normally, banks can profit on the spread between the yields on longer-term assets and the interest they pay on deposits and other short-term liabilities. However, bank profits get squeezed when short-term interest rates rise relative to the yields on long-term assets. This can lead banks to cut back on their lending, which, in turn, can put the brakes on economic activity.

When the Fed asked banks what they would do when confronted with an IYC, many of those surveyed indicated that they would tighten lending standards or price terms on every major loan category.

The three top reasons to tighten lending were:

In this chart, you see the IYC in orange. It dips below zero (it is now — this chart is three months old) about a year before a recession hits.

The blue line shows banks becoming stricter in their lending. 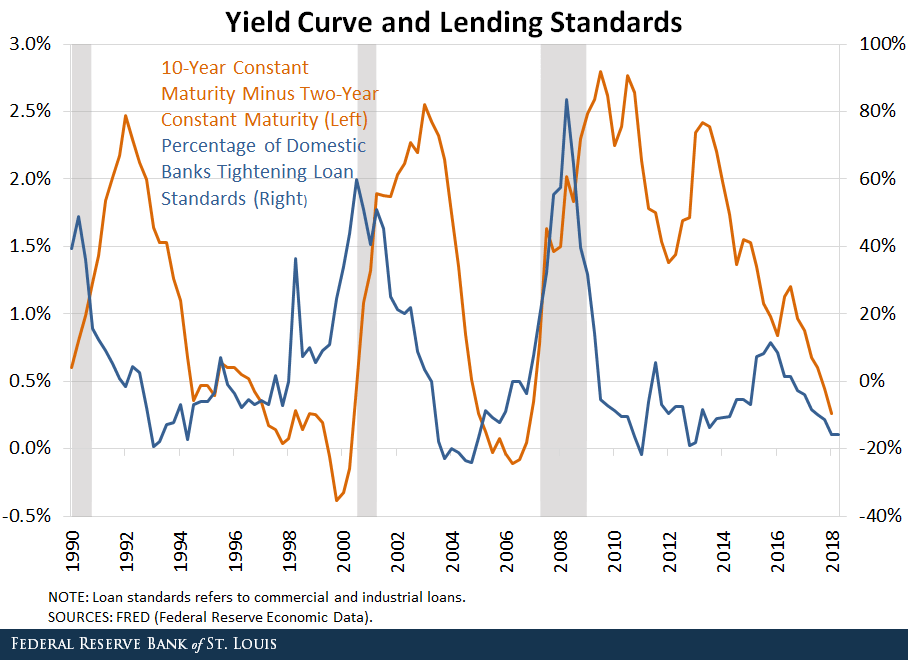 The economy slows after banks tighten their lending standards, obviously.

An IYC causes banks to reduce the supply of loans. Thus, an IYC doesn't just predict a recession — it actually causes one.

Bank tightening is already happening. The FHA said yesterday that it was going to make it harder to get a home loan. The Wall Street Journal headlines read:

Bank of America (NYSE: BAC) has fallen from $30 to $26 over the past week. You don't want to be in banks heading into a recession.

I’ve been writing about this scenario for months in Bull and Bust Report. It’s time to take precautions to not only protect your money but profit when the worm turns. Click here now to learn how.