Welcome to The LNG Century

It's five times the size of an aircraft carrier... 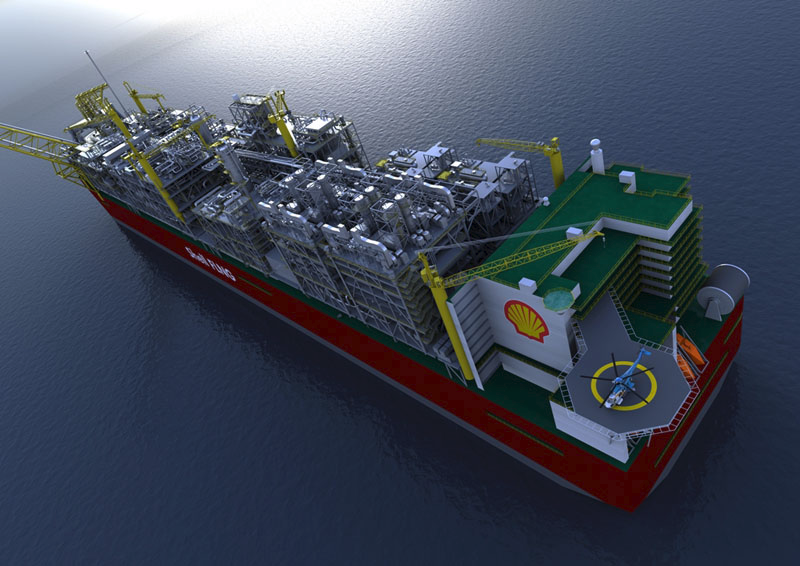 Royal Dutch Shell (RDS-A) is going to blow the doors off what "big" means.

The builders got the go-ahead from Shell executives a couple of weeks ago. The project includes building a massive vessel with the goal of reaping offshore natural gas fields.

The Prelude facility will process up to 110,000 barrels of oil equivalent per day and super-cool natural gas to –162°C, reducing its volume by 600 times so it can be shipped to customers around the world.

The FLNG plant is an advanced LNG technology with extraction, gas processing, and liquefaction activity performed in a single plant directly above the gas reserves. Such a plant does not require pipelines for transportation of gas for the purpose of onshore processing. The plant is expected to have an annual production capacity of 3.5 million to 4 million tons of LNG. The plant will also be equipped with technology to locate new gas fields.

And make no mistake: This will be the largest floating thing ever built.

The company is building this leviathan to suck natural gas out of the Prelude field between Australia and East Timor for the next twenty-five years.

It is the massive $11 billion solution to the question vexing Big Oil for years, which is how to procure big underwater deposits of NG when there is no pipeline or other infrastructure. It has the added bonus of downplaying local politics.

Emerson Electric Co. (EMR) has signed on to do front-end work. Emerson Process Management won the contract due to an agreement called the Global Framework Agreement signed between Shell and Emerson earlier this year; this agreement ensures continuous collaborative efforts between Shell and Emerson, with the latter assigned as the Main Automation Contractor for all of Shell’s operating businesses.

For the last couple of years, I've been telling you to buy the natural gas infrastructure plays, my favorite one being Chicago Bridge and Iron (CBI).

I mentioned CBI in this space back in October 2009, and several times since. 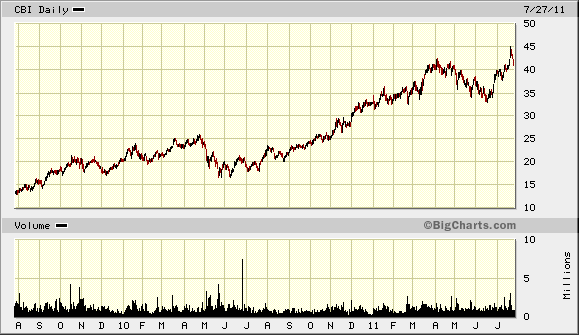 Since January, the company generated year-over-year EPS growth of 20%.

But with service companies, it's all about the backlog.

And a nice book CBI has: At the end of the quarter, the backlog of business stood at $7.3 billion. Order intake jumped 57% year over year and another 32% in the quarter.

One of the biggest contracts CBI picked up was a $2.3 billion deal on the Gorgon LNG project in Western Australia. And just last week, the company snagged a $500 million project to build storage tanks in Australia.

The company builds LNG terminals. LNG infrastructure is a boom business — especially in Asia and the Middle East. As the world makes the long transition from expensive petroleum to cheap natural gas, these companies will continue to make money.