If I had told you five years ago that you could make an easy ten bagger in a small oil company that was drilling off the shore of Ghana, you would have laughed...

And yet the proof is in the return. Take a look: 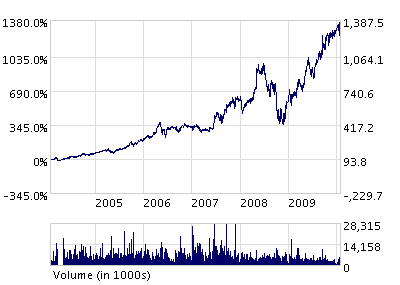 The truth is you make the most money by going where no one else wants to go, for the simple reason that no one has bought yet — which means everyone is left to buy. The secret is to get there first with the most.

Tullow is an independent oil exploration company with interests in nineteen countries. A few years ago, the company discovered the world-class Jubilee oil deposit off the coast of the west African country of Ghana. The deposit is expected to have 1.8 billion barrels of oil. I immediately recommended the company and its partner, Heritage Oil; as you can see by the chart, the return has been substantial.

Tullow was once a small player in African oil that no one had heard of... They now have a market cap of 10 billion pounds and just recently raised $1.35 billion to buy out partner Heritage Oil's claims to the Jubilee field.

According to the UK's Financial Times, "Tullow, which has a market capitalization of nearly £10bn, said it also needed the money to fund development of its Jubilee oil field in Ghana, which is on the cusp of production, and to launch a worldwide drilling programme."

The Heritage buyout (currently pending approval by the Ugandan government), is important because it preempts Italy's Uni, which was making an offer. Furthermore, Tullow has stated that it promised to sell half of the fields to CNOOC of China or France's Total.

My guess is that CNOOC Ltd (NYSE: CEO, $6.4 billion market cap) will be the big winner.

You see, the global economy has been in the dumps for the past two years. Most economists would say that this should translate into a smaller demand for oil. And that's true — for the U.S., where oil consumption fell by about 5% to 19 million barrels a day.

But in China, there was no slowdown.

Even more significant is the fact that China now produces less than half of its oil consumption. Crude imports reached a record high of 4.1 million barrels per day. Furthermore, Chinese production actually fell 0.5% in 2009 over 2008.

The deputy director of the National Energy Board, Wu Ning, warned that "now the most acute problem in China is the increased importation of crude oil."

And it's not just oil that China is importing by record numbers...

China's General Administration of customs recently announced "that the country's net imports of coal in 2009 exceeded 100 million metric tons for the first time."

China has hit the continental divide and is now a net importer of coal. Up until last year, they were a net exporter of this energy source. According to Customs, China imported 125.834 million metric tons of coals in 2009. This was up 211.9 percent on over 2008.

China is after not only oil and coal, but everything in between. Including gold. The Middle Kingdom is now the number one consumer of gold.

According to preliminary statistics from the Bombay Bullion Association — the leading body of gold traders in India — China overtook India as the biggest consumer of gold last year. This is big news. India has held the position as the world's biggest gold consumer for many years.

Gold has now taken its place on China's long list of commodities for which the country is the world's largest buyer. China's rapidly growing economy, investment demand, and $2 trillion in foreign reserves have allowed it to become the buyer for many others, as well.

Like something out of a Pink Floyd video, China is the factory of the world and needs to feed commodities to its vast maw of production.

Lucky for us, the largest untapped, unexplored, and unexploited resource country on earth borders China to the north. It's called Mongolia, a country with just three million people and a GDP of only $5 billion.

There is just one recently signed Mongolian gold deal that will double GDP every year for the next 30 years! And Mongolia has oil, gold, copper, molybdenum, uranium, silver, coal, natural gas — all of it left untouched, due to old Soviet bumbling and 20 years of political bickering.

But now things have changed. The government is working together...  Deals are being signed...  And China is on the commodity warpath...

And incredibly, Mongolia — with its vast mineral wealth right next door — is on sale for a fraction of what these assets command in the international marketplace.

If you think making 1,380% in Uganda in a couple of years was a good return... It has nothing on what you can make in Mongolia.