Why There's No Recession in Western PA

I usually don’t agree with Jim Cramer’s politics, but a few weeks ago, he went off on one of his typical rants...

He said, “I supported the green movement until I realized they were standing in the way of jobs.”

I hope Obama is reading this, because Cramer is 100% correct. And if Obama wants to get reelected, it’s about jobs — and nothing else.

In yesterday’s issue of the UK’s Telegraph, Ambrose Evan-Pritchard writes:

The American phoenix is slowly rising again. Within five years or so, the U.S. will be well on its way to self-sufficiency in fuel and energy.

Assumptions that the Great Republic must inevitably spiral into economic and strategic decline — so like the chatter of the late 1980s, when Japan was in vogue — will seem wildly off the mark by then.

Telegraph readers already know about the "shale gas revolution" that has turned America into the world’s number one producer of natural gas, ahead of Russia.

Less known is that the technology of hydraulic fracturing — breaking rocks with jets of water — will also bring a quantum leap in shale oil supply, mostly from the Bakken fields in North Dakota, Eagle Ford in Texas, and other reserves across the Mid-West.

"The U.S. was the single largest contributor to global oil supply growth last year, with a net 395,000 barrels per day (b/d)," said Francisco Blanch from Bank of America, comparing the Dakota fields to a new North Sea.

Total U.S. shale output is "set to expand dramatically" as fresh sources come on stream, possibly reaching 5.5m b/d by mid-decade. This is a tenfold rise since 2009.

And this means jobs. Lots of jobs.

Let me put this into perspective: The Marcellus Shale is the hottest natural gas play in America — and the hottest state for shale gas drilling is Pennsylvania.

The chart above is from the EIA. It illustrates the significant jump in natural gas production in recent years from increased drilling activity in the Marcellus Shale in Pennsylvania.

But that’s only half the story...

Because as I said, this boom in shale drilling means jobs.

Before it was bought out by Royal Dutch Shell for $4.7 billion, natural gas driller East Resources was planning on drilling 6,000 to 7,000 wells in Tioga County in Northern Pennsylvania.

So had East Resources gone on to drill 6,500 wells, 78,000 Americans would’ve had great-paying jobs.

Multiply that by 10, maybe even 20... now we’re talking about something really special.

And again, this is only part of the story, because the technology that’s unlocking precious natural gas is also unlocking oil.

Now, Energy and Capital was one of the first independent investment publications to alert newsletter readers about the boom coming in the Bakken. We wrote about it in early 2008.

Since then, our readers have found success with Bakken stocks Brigham Exploration and Northern Oil & Gas: 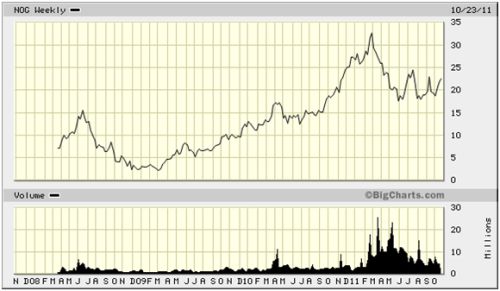 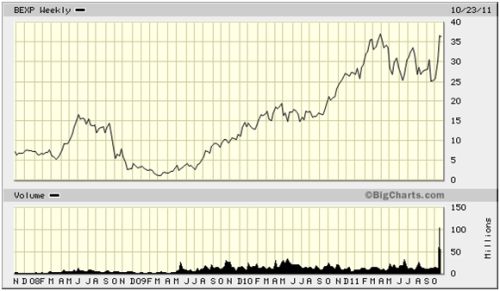 But the Bakken is only one of many oil shale formations in the United States...

To our west lies a monster.

It’s so huge, it could supply America — and maybe a good chunk of the world — with oil for 100 years.

And just as environmentalists used to pooh-pooh the Bakken, they’re now doing it to the Green River. But the technology is here. It’s proven. And it’s creating tens of thousands of jobs.

I just returned from Fort McMurray and saw with my own eyes the wealth being created by oil sands production. There are more jobs there than bodies to fill them. Workers there are flush with money — and spending.

More importantly, everybody was smiling and happy.

The Green River could be America’s Fort McMurray...

Eighty percent of the locations that contain oil shale in the Green River Basin are federally owned. Back in 1930, the government tagged this land as federal territory knowing what was under the ground.

They basically put this oil shale-rich land away for a rainy day...