The Name Game: From “Global Warming” to “Climate Change”

Most of you will remember that “climate change” used to be called “global warming.”

But before that, it had another name: “inadvertent climate modification.”

John F. Kennedy is president of the United States... America enters the Vietnam War... Marilyn Monroe is found dead... the Soviets have missiles in Cuba... and the Beatles are on the verge of becoming the most influential band of all time...

It's at this time that concerns over CO2-induced climate change begin to mount in the United States and the Soviet Union.

By the late 1960s and early 1970s, the term “inadvertent climate modification” was used in scientific papers to describe what we'd call climate change today. A 1971 Swedish study titled "Inadvertent Climate Modification: Report of the Study of Man's Impact on Climate (SMIC)" is one example of the terms use.

The term “global warming” was first used in 1975 in a scholarly article by geochemist Wallace Broecker of Columbia University titled "Climatic Change: Are We on the Brink of a Pronounced Global Warming?" But according to NASA, the term didn't enter the popular lexicon until June 1988 when scientist James Hansen testified to Congress about climate, saying:

Global warming has reached a level such that we can ascribe with a high degree of confidence a cause-and-effect relationship between the greenhouse effect and the observed warming.

How we went from “global warming” to “climate change,” however, is less clear.

Within scientific journals, there is a difference between “climate change” and “global warming.” NASA says, “Global warming refers to surface temperature increases, while climate change includes global warming and everything else that increasing greenhouse gas amounts will affect.”

But to the majority of the population, the two are one and the same.

In 2013, Donald Trump tweeted: “They changed the name from ‘global warming’ to ‘climate change’ after the term global warming just wasn’t working (it was too cold)!”

But the truth is there is no “they.” There is no global committee of egghead scientists who rubber-stamped a name change. Instead, the lexicon change was the result of many different groups for many different reasons.

Those reasons, however, are subject to debate.

Some say the term “climate change” is preferred today because it sounds less frightening.

Meanwhile, others say the term “climate change” is preferred today because it sounds more frightening.

It's obvious there has been a change to the popular lexicon in regard to my preferred term, “inadvertent climate modification.” Google Trends shows us a clear increase in search traffic for the term “climate change” since 2004. 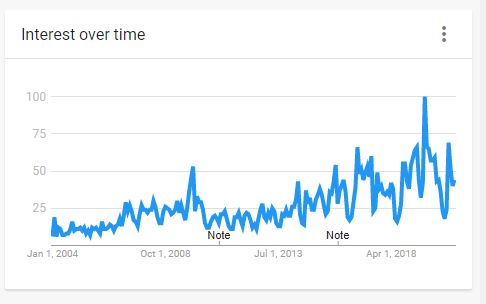 And it shows us a clear decline in search traffic for the term “global warming” over the same period. 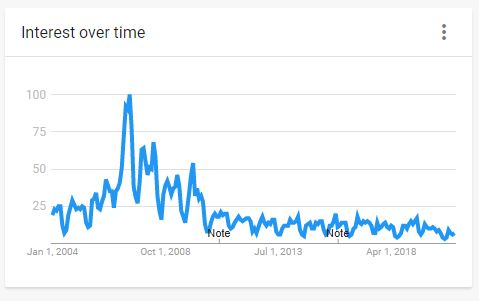 Instead, I believe the preferred use of the term “climate change” over “global warming” is a bit of a salesman's trick known as objection handling.

Objection handling is using clever rhetoric that anticipates and attempts to prevent negative responses or objections from the listener. The goal is to prevent the listener from responding with “But what about...”

If you're a parent to children, you've probably done this a million times.

If you have or had parents (particularly older, thicker-headed parents), you've definitely done this a billion times.

In a 2011 article, the Union of Concerned Scientists wrote, “For years, climate contrarians have pointed to snowfall and cold weather to question the scientific reality of human-induced climate change.”

And still, nearly a decade later in 2019, National Geographic wrote, “In a time when climate change is discussed in the context of record highs, droughts, and wildfires, cold weather and blizzards can seem out of place. For those who deny that climate change is happening, it's an opportunity to undermine scientific consensus.”

Using the term “climate change” handles the “But what about cold weather/snowfall” objections. Getting rid of the word “warming” doesn't give climate change contrarians a chance to object with the fact that it's cold outside right now.

And that's what I believe is the main reason behind the change — it's an objection-handling technique on the part of climate change advocates.

I say we go back to “inadvertent climate modification” to dull the emotional and political facets attached to both “climate change” and “global warming.” But something tells me there's no way that's happening — both terms are worth way too much for that.

I want to leave you today with a George Carlin skit on euphemism. At one point, Carlin explains how we went from simple terms like “shell shock” in WWI to the overly complicated “post-traumatic stress disorder” today.

What's interesting is the opposite happened with regard to CO2-induced climate change. The overly complicated “inadvertent climate modification” became the more simplified “climate change.”