The Most Underrated Long-Term Investment in the World Today

Have You Seen This Before?

I just got back from a trip to Texas. Here is a picture of the Permian Basin from the air: 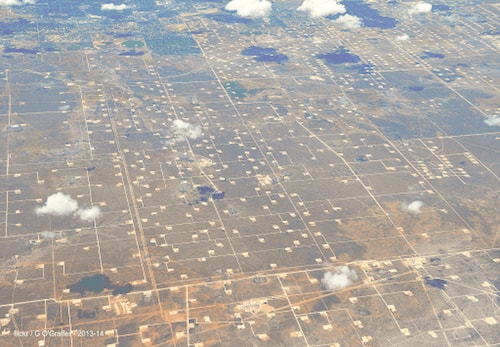 When I first saw it, I didn’t know what it was. Not farms, not houses. Just empty dirt lots lined up like track homes.

After some research, I discovered that those squares are DUCs: drilled but uncompleted wells. I find it absolutely amazing. What it means is that the United States has more oil and gas than it can use.

And that’s not all. Perhaps you missed the news last month, but the Permian Basin now has twice as much oil as it did two months ago...

The Permian’s Delaware Basin, the less drilled part of the giant West Texas and New Mexico oil field, holds more than twice the amount of crude as its sister, the Midland Basin, the U.S. Geological Service said Thursday.

The Wolfcamp Shale and Bone Spring rock formations in the Delaware hold an estimated 46.3 billion barrels, the scientists said in their first assessment of the area. In addition, it holds about 281 trillion cubic feet of natural gas, about 18 times the amount in the Midland Basin, which is more heavily drilled and better known.

This is a massive amount of oil. But the producers can’t drill it all at once. So they stick in a straw, evaluate the oil potential, and close up. These are the DUCs.

These DUCs will put a natural top on the oil price even as the volume increases.

Right now there is bottleneck with pipelines and refineries regarding natural gas. Natural gas is a byproduct of oil production. However, it is much less profitable than oil.

Gas prices in the Permian Basin have been priced at zero over the past few months, as there aren't enough pipelines to take it. That said, the state regulators want flaring to stop, as it is an environmental hazard and a waste of energy.

Texas allows producers to seek a 45-day permit for flaring of associated gas with a new well. Extensions allow an additional 180 days. Anything longer requires a full hearing by the Texas Railroad Commission, which governs oil and gas production.

That said, the global natural gas price is becoming fungible, much like oil. This in turn enhances demand from Asia, which can make long-term bets on supply.

China is expected to quadruple its natural gas imports by 2030. The vast majority of this new demand will come from the Permian Basin and be shipped out through Houston. Last year, Houston handled 10,500 ships at its port.

To further complicate the issue, Trump slapped a 25% tariff on LNG exports to China. This didn’t stop the flow of trade. China simply started buying its product after it first ported in South Korea and Japan.

The upshot of all of this is that the volume of LNG for export will continue. Prices will remain low. The way to play this is through infrastructure: shipping, pipelines, and refiners.

The good news is that all of these companies are extremely undervalued due to the low price of natural gas in the U.S. over the last 10 years. And many of them pay hefty dividends.

I am currently doing my due diligence and will have a report out over the next few weeks. The Permian-to-China energy story is perhaps the most underrated long-term profit trend in the world today.