The Most Misleading Chart of the Year

A week ago, the Democratic Congressional Campaign Committee tweeted a thank-you to President Joe Biden for decreasing gas prices, and it included the chart below. See anything strange? 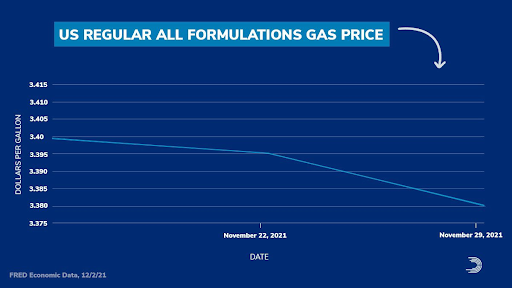 So steep! So sudden! So… misleading?

Astute readers might notice that the Y-axis is divided into 0.5-cent units. That’s not 0.5 dollars — that’s 0.5 cents.

The DCCC is publicly thanking Biden for a $0.02 drop in gas prices over two weeks.

That is, pardon my French, ridicule.

A few weeks ago, the U.S. celebrated Thanksgiving.

And 32% is even less than at the height of COVID — 35% of people drove to see their family last Thanksgiving. Given gas prices, that’s not surprising.

It’s impossible to overstate the impact.

People are downsizing their homes, not seeing family, not eating out, buying a few gallons of gas at a time.

Mostly the pandemic — or, more accurately, its conclusion. A year ago, when everyone stopped going outside, oil companies cut supply — hard. Benchmark oil prices dropped to NEGATIVE levels in April 2020 for the first time in recorded history. It was cheaper for companies to leave crude in the ground.

But as lockdowns lifted and vaccines were released, people started coming out of hibernation. Desperate for restaurants, vacations, and OTHER PEOPLE, their demand for oil started to soar again.

But oil companies haven’t kept up. It takes time to restart production. Many are skittish of another sudden collapse in demand.

U.S. oil production dropped by a MILLION barrels of oil per day between 2019 and 2020. We still haven’t recovered.

It’s really hard to get around this. President Biden tried releasing 50 million barrels of oil from the strategic reserves. This was, to say the least, insufficient — 50 million barrels is less than what the U.S. consumes in three days.

But there is hope on the horizon, dear reader. The cavalry is on the way.

I’m talking, of course, about the PERMIAN BASIN. 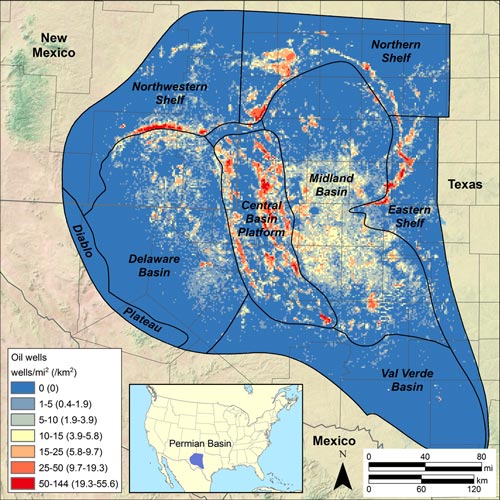 It’s like a weather map, except the weather is money.

The Permian Basin is an 86,000-square-mile deposit of oil and natural gas that spreads across Texas and New Mexico, and it turned the U.S. into a net oil exporter in 2019 after decades of reliance on Canada, Saudi Arabia, and Mexico.

The Permian Basin is responsible for 80% of production increases since November, and this month, it's supposed to break its pre-pandemic production record.

According to the Dallas Fed, the region will hit 4,950,000 barrels of oil per day. That’s MORE THAN HALF of total U.S. oil production.

While other oil suppliers are skittish about demand faltering or about decarbonization policies, drillers in the Permian are running headlong into this opportunity. And you can too.

In a few weeks, we’ll come out with what to invest in. But keep an eye out — this opportunity will only last as long as demand outstrips supply... and in the fickle world of oil markets, that will only be for so long.