The Mob Takes Down Another Fool

"People want you to think that everything is always about left versus right. It’s not. It’s about insiders versus outsiders."

He's right, of course. And with the democratization of information, we are all more aware of how we are getting screwed.

A few weeks ago, I wrote about the destruction of our institutions.

Basic institutions that have built trust over hundreds of years are under siege. The concepts that used to be trusted are now second-guessed at every opportunity — the rule of law, the courts, Congress, the presidency, universities, voting, Wall Street, unions, housing, trade, international treaties, the military, books, TV news, newspapers, political parties, law enforcement, the FBI, CIA, ICE, EPA, BLM, NFL… Name it and it is embroiled in some controversy.

The Crisis of Authority

Half a decade ago, Martin Gurri, a former CIA world analyst, wrote a book called The Revolt of the Public and the Crisis of Authority.

His big idea was that the monopoly of information formally possessed by the elite is now in the public square. The insiders can no longer hide behind the green curtain and pull the levers of authority.

The mob sees lever No. 2 being pulled, thinks it knows why, and demands that button No. 4 be pushed instead.

To mix a metaphor, the great unwashed have seen how Wall Street sausage is being made and they won’t eat it.

After the mob blew up some hedge funds, much ink was spilled about how the little guy “stuck it to the man.”

I doubt it… What goes up must come down... 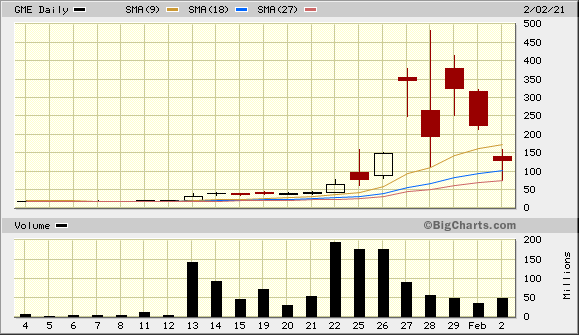 As you can see by the chart, we are almost back to where we started.

There are many bag holders who bought the narrative at $350 and will lose 95% of their money. And I’d bet your sweet bippy there were a lot of Wall Street insiders, CFAs, hedge fund managers, and the like who ended up with large profits.

I personally told my Launchpad Trader readers to take 197% profits on AMC Entertainment (NYSE: AMC) on the open when it gapped up to $19.

Real Help for the Little Guy

Jeff Siegel, a good friend and associate who I've known for 25 years, launched an investment newsletter back in 2006 called Green Chip Stocks to not only bring outsized profits to the average Joe but to do it in a way that betters humanity. And Jeff accomplished just that.

More recently, he launched a more speculative trading service called Weekly Score. Its mission: to allow regular retail investors the opportunity to trade like billionaires by simply getting them access to the same deals billionaires see on a daily basis.

Deals that most retail investors never even see until it’s too late.

Well, just take a look at how the Weekly Score portfolio has performed over the past 29 days.

Even on days when the broader market was tanking, we were able to lock in double-digit gains on six quick trades — some of which were delivered in less than a week.

Except Jeff is not really an insider. He just has access to their playbook.

And don’t take my word for it — his track record is incredible.

This year, Jeff expects to double the number of winners we saw last year and get through all of 2021 without a single loser.

I know this sounds a bit hyperbolic. But the proof is in the numbers.

At this point, I just want to see more retail investors get rich in defiance of a system that’s always been designed to screw over the rest of us who don’t own yachts, private islands, and alternative trading apps.

After all, why shouldn’t YOU get a steady stream of double-digit profits like the elite?

They may think we’re not smart enough to get in on some of this action too. But the Weekly Score portfolio and track record prove otherwise.

So if you’re ready to step up your wealth strategy game, see beyond the curtain, and really stick it to the Wall Street elite, join Jeff and click here.