The Keystone XL Pipeline is a Distraction

Here's a Better Way to Invest in Infrastructure

He was talking about the Keystone XL Pipeline after last week's midterm election victory for Senate Republicans.

With the balance of power now shifted, the president has very little leverage left to enact policies he supports — but Keystone XL is one of those remaining bits of leverage.

After taking six years to "gather up the facts," you'd think he would've found them all by now. To be honest, he probably has. The controversial pipeline project's approval is simply a bargaining chip.

The Keystone XL Pipeline is a complete and utter distraction for you and I. For investors who are focused on energy, the pipeline is not a moneymaking entity.

The only way you could see meaningful gains on it now is if you built a working time machine, went back six years, and invested in TransCanada (NYSE: TRP).

Best of luck to you.

For the rest of us, the pipeline and the congressional debate over it next year will be a distraction meant to make us think the energy infrastructure industry is stalled.

This couldn't be further from the truth.

Beyond the stalled Keystone XL and a few other large and divisive projects, the energy infrastructure space is chugging along just fine.

Now, in Texas, most of the important infrastructure exists already, except for LNG processing plants that are under construction as I write these words to you.

But in North Dakota, the development of pipelines, storage facilities, and gas processing plants is happening as well.

The Keystone XL media hype may cause some to think pipelines of all varieties are being debated, but really, it's just the one.

Plus, since its sole purpose is to transport oil from Canada's oil sands to the Gulf Coast, it won't have any effect on the fastest-growing area for infrastructure investments... 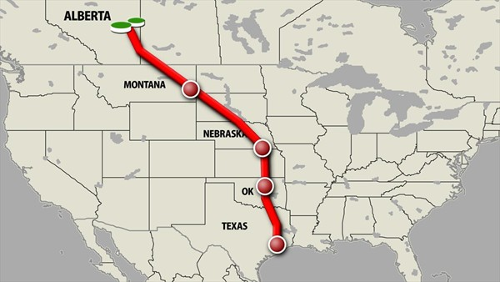 As North Dakota moves ever closer to 1.5 million barrels per day in production and starts building the much-needed facilities to rein in natural gas flaring, the infrastructure companies will be busy laying the foundation for the transportation of these products.

So while most naïve investors pile money into TransCanada, you should pay attention to what's happening beneath the more publicized projects like Keystone XL, Energy East, and Northern Gateway.

After all, some of the best progress that's been made in the sector doesn't even involve pipelines.

Part of this infrastructure boom in North Dakota is already happening for refining and storage companies, which will be responsible for holding and transforming the crude new pipelines will carry.

In Dickinson, North Dakota, the state's second refinery is just three weeks away from opening its doors.

The plant is another big step for North Dakota's growth as an energy-producing region. It will take in 20,000 barrels of crude each day come January.

From this, the companies involved expect to see 7,000 barrels per day in diesel production that will go to customers in North Dakota.

The plant is being built and will be run by Montana-Dakota Resources and Calumet Specialty Products LP (NYSE: CLMT), which may be one of the big emerging players in North Dakota's infrastructure boom. 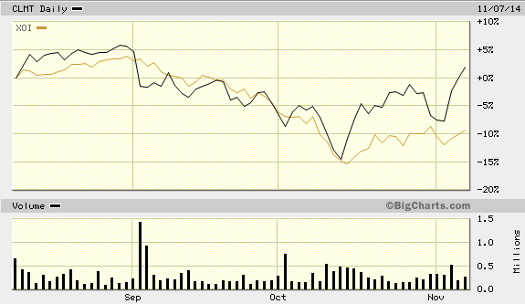 The company is a master limited partnership based out of Indiana. It has a 9.8% dividend and has weathered the current oil price decline fairly well. In fact, by building and operating systems in the Bakken, Calumet can help relieve price pressure on drillers.

When the refinery, oil field, and customers are all in the same region, costs go down for drillers (and everyone else involved, too). This means the Bakken E&Ps that work with Calumet will find lower costs and more profit.

The company already has plans to build another refinery in western North Dakota once this one is finished, as it attempts to own as much of the refining capacity as possible.

It currently has about two dozen projects under construction or in operation all over the U.S. that produce everything from motor oil to diesel to asphalt and natural gas.

Although the price dipped ever so slightly over the last few months, I would suggest an investment because of sheer growth potential. Plus, that 9.8% dividend is tough to overlook.

Remember, this company and its projects may not make headlines like TransCanada and Keystone XL, but they certainly stand to make a lot of money.