For over a century, there's been one sector that has completely dominated the energy market: electricity.

And it looks set to dominate for another hundred years.

The global energy system is under transition. Finite and polluting energy resources are being replaced with new sources and solutions.

But the demand for the electricity those new sources produce is ever-growing. 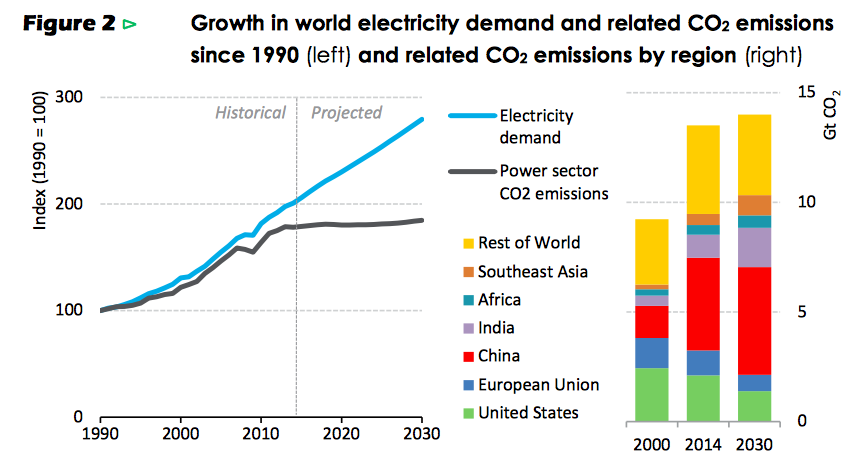 According to a new report by the International Energy Agency, electricity will remain the fastest-growing sector of the energy market for decades.

That growth is led by population increases, economic development, and global urbanization — most notably from China and other Asian nations.

The IEA said electricity is one of the few energy sources that will see growing consumption in 2040, mainly due to electric vehicles.

The agency writes, “The share of electricity in final consumption, less than half that of oil today, overtakes oil by 2040.”

The agency's scenarios show wind and solar PV playing a major part in electricity generation over the next several years.

The new report forecasts wind and solar PV contributing to over half of the electricity generation demand through 2040.

It notes that policymakers and regulators will have to keep up with technological changes and the rising need for flexible power systems.

The agency says that by 2040, low-carbon sources will provide more than half of total electricity generation.

Much of the IEA's new report is focused on electricity. The executive summary even begins by talking about it, saying:

The energy world is marked by a series of deep disparities. The gap between the promise of energy for all and the fact that almost one billion people still do not have access to electricity.

The report highlights electricity issues in Africa, noting population growth rates could lead to more than half a billion people in Africa without electricity by 2040. The IEA says this is “much higher than the growth seen in China’s urban population between 1990 and 2010, a period in which China’s production of materials such as steel and cement sky-rocketed.”

Africa's electricity problems stem from poor infrastructure and general issues such as local corruption. The IEA writes, “Our Africa analysis underlines that the planning, design and governance of the world’s growing cities, the industrial materials that are used in their construction, and the transport options that are available to their inhabitants are critical issues for the global outlook.”

The IEA stresses that the rise in Africa’s oil consumption to 2040 is larger than China's, while the continent also sees a major expansion in natural gas use.

The report says Africa has the richest solar resources in the world but has only around 5 gigawatts (GW) of solar PV, less than 1% of the global total. The agency says solar PV would provide the cheapest source of electricity for many of the 600 million people across Africa without electricity access today.