In last week’s analysis of my macro-investment thesis “The Great Reopening,” I laid out the events the United States specifically — and the rest of the globe generally — were experiencing in the beginning of the 1920s decade.

Let me quickly remind you what was happening 100 years ago:

Many of these negatives bottomed out and by 1922, the markets were full of rocket fuel.

Fast-forward to 2020–2021. Here’s what's happening right now in the United States specifically and the rest of the planet generally:

I consider these to be the most important economic factors heading into the rest of this decade. But the factors I consider to be the fuel for an epic bull run in the coming years are massive disposable capital in the form of the current savings rate, low interest rates, the massive amount of unfilled employment positions, and an economy that’s restarting at a near-zero baseline.

Take a look at this picture: 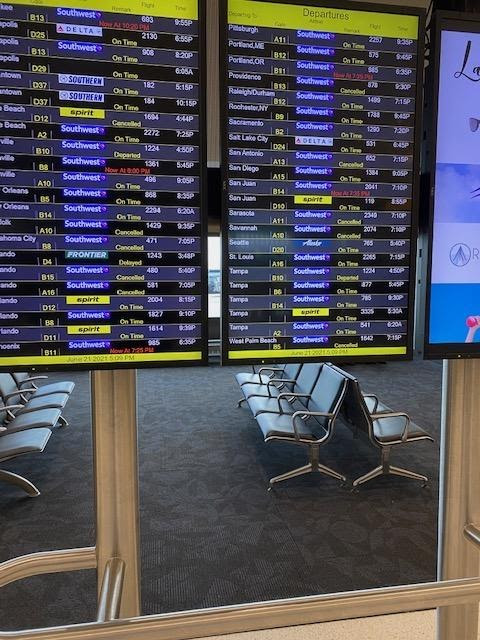 This is a photo I took of the departures at the airport about a week ago.

My wife and I flew to our vacation home in Longboat Key, Florida, and many flights were canceled because there weren’t enough employees to work the flights. Even the restaurants at the airport were closed because of the lack of workers.

However, the airport was the most crowded I'd seen it since before the lockdowns.

We had intended to drive down to Florida (in order to take our dog with us), but we couldn’t find a single rental car available anywhere — not a single one.

So we had no choice but to fly.

Summer months in Florida are typically considered “low season.” By the end of April, the snowbirds have returned north to their primary homes in Michigan, Wisconsin, New York, and Indiana.

Traffic gets better. Making a reservation at a good restaurant is easy. And at times, you can have the whole beach to yourself.

It’s why my wife and I love it so much in Longboat during the summer. We are willing to put up with the heat if it means fewer crowds.

My tiny paradise on the Gulf of Mexico is sinking from all the northerners who want a taste of freedom. Florida started reopening in May 2020… and fully reopened in September.

Ever since then, there's been a conga line of northerners buying up Florida real estate and moving down.

One of our favorite restaurants on the island is booked for three weeks out. At this time of year, you can usually just walk in and get seated immediately.

On Sunday we couldn’t get off the island at 4 p.m. Both ends were jammed with cars.

Cruise lines in Tampa and Miami are firing up their engines.

There are “hiring” signs everywhere.

Florida’s economy is booming, and it will spread to the rest of the nation.

When it does, it will unleash a bull market for the ages.

When that capital starts getting invested and spent, it’ll act like a trampoline for the markets.

In fact, it’s already happening as you read this...

Which is why my all-star stock picker and visionary Chris DeHaemer has an exclusive presentation on “The Great Reopening.”

In it, he lays out the four stocks he sees doing quite well in this environment.

I urge you to listen to Chris’ advice. Two of the stocks he recommended right before the COVID lockdowns have returned 352% and 222%, respectively.

You can get his free presentation here.