I do hope you're finally taking advantage of the "profit bridge" I've been telling you about. . .

In case you're not up to speed, the "profit bridge" is the investment opportunity created when projects are funded by federal dollars.

And in the age of bailouts and stimuli. . . the bridge is bigger than ever.

I've paid careful attention to how this phenomenon has developed within the water industry. (Every single water stock I told you about two weeks ago is up.)

But the pillars of a profit bridge are also being established in the energy industry. And savvy investors are already exploiting it.

That's the total sum made available by the Department of Energy as a result of the stimulus.

Granted, that "free" money is also taxpayer money. But they've already got it, and you're not getting it back.

So you should be willing to profit from any opportunities that arise when that money is spent. As it happens, those opportunities are cropping up right now.

In fact, $2 billion has gone through the door of the DoE in September alone — and the month's not over yet! It's been one of the strongest months for federal energy funding since March, when stimulus dollars started being allocated.

Here's where the $2 billion went this month:

And just this week, a joint announcement by the DoE and the Treasury Department awarded $550 million in renewable energy "government cash grants."

According to Reuters, that half a billion dollars will be used:

The money comes from the economic stimulus package approved by Congress and will provide direct payments to companies in lieu of tax credits to support solar, wind, bio-mass and other renewable energy production facilities.

Pay attention to the wording there: a "government cash grant" means the money doesn't have to be paid back. It's free money for the companies that get it.

And "direct payments to companies in lieu of tax credits" means the cash is paid up front.

Finding out where that money is headed is the key to hefty "profit bridge" gains.

Leaving Crumbs on the Profit Trail

This is where our beautiful democracy comes in. . . because whenever the federal gov't gives grants, loan guarantees, tax breaks, and the like, there's enough red tape to find out exactly where that money is headed.

In the official press release about the $550 million worth of cash grants, five wind farms received funding:

What the press release doesn't tell you is that all five wind farms are tied directly to publicly traded companies.

But a little digging will tell you that the Pyron Wind Farm is owned by German utility E.ON (XETRA: EOAN). And the other four are owned by Portuguese cleantech spin-off Iberdrola Renovables (MCE: IBR) with turbines provided by Gamesa (MCE: GAM).

You can see how the stocks have done below. In total, those five farms will boast over 700 MW of generation capacity.

This is just one example of how government handouts are stoking big gains for smart investors.

In August, battery maker Ener1 (NASDAQ: HEV) received a DoE grant worth $118.5 million. And US Geothermal (AMEX: HTM) recently nabbed one worth $7.39 million.

Look at how all these stocks are performing as money is handed out to them: 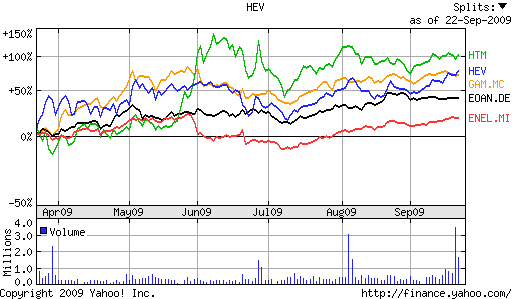 And the federal money that went to boosting these stocks? It's only a drop in the bucket compared to what is and what will be spent.

Keep an eye on this trend. There is easy money being made.

P.S. A group of investors has closed one winning trade per week — every week this year — on the heels of intense capital support for clean technology. One of them has averaged 20% per week. Click here to see how they're doing it.