The Day We’ve Been Waiting for Is Here

I didn't think it would arrive so soon, but unpredictability seems to be the only thing we can count on nowadays.

This might be the biggest year for electric vehicles on record. The whiplash-inducing swings we’ve seen from the oil market have a lot of drivers reconsidering their addiction to gasoline.

But like I’ve mentioned before, the world isn't quite ready for that. That’s where Putin comes in — he couldn't care less if the world is ready or not. And whether he realizes it or not, he’s about to become the face of the EV revolution.

Remember the lithium price spike back in 2016? It looked something like this… 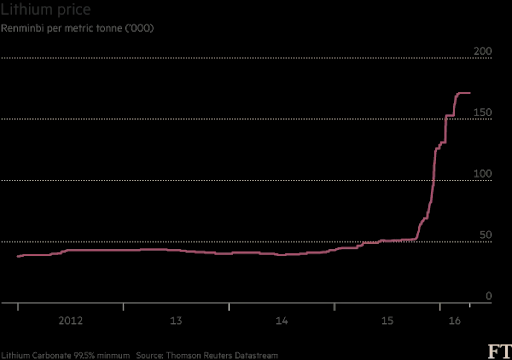 Prices for a tonne of lithium carbonate tripled in under a year — almost immediately after China and the EU started a round of subsidized EV programs. Pretty soon, many drivers in Europe and Asia couldn't afford NOT to buy them. 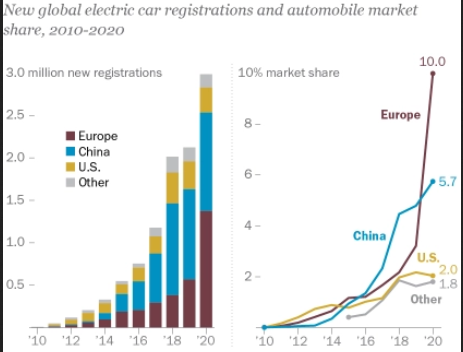 After global EV ownership almost tripled, the price of lithium followed suit. It was a stark message to the rest of the world: We need much, much more lithium than we are currently mining.

That bottleneck has so far kept gasoline-powered vehicles competitive. But the price disparity between owning a gas vehicle versus an EV has recently undergone some “correction,” to put it mildly. 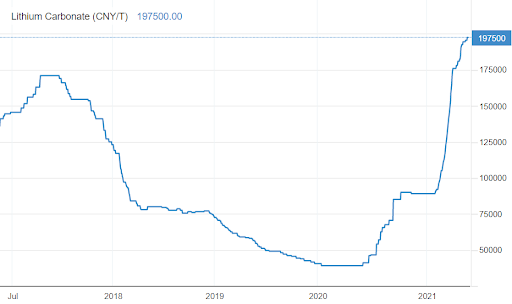 We are officially entering another lithium crunch point. This time, prices have shot up even higher. That’s not great news for the companies that depend on these materials, but for investors it tells us one thing: The world is starting to wake up to the issue.

Lithium prices have skyrocketed because the planet’s industrial giants have finally wised up. Every automaker on the planet is currently combing the Earth for the best deal on lithium.

Take Tesla, for example. It practically dug its own Australian mine just to make sure its supply chain was secure.

So far, trillions of dollars have been spent to produce the relatively low amount of lithium that the entire world produces in a year. Compared with even the most pessimistic growth forecasts, it’s not even remotely enough to meet demand.

World leaders can sign carbon-free deadlines until their wrists cramp, but it won't change the numbers. If lithium supplies dry up, the EV revolution shuts down.

Well, I wish it were that easy. But the point stands: Mining is not the perfect solution to this looming crisis.

In fact, commitment to mining is exactly what got us this deep in the hole to begin with. Companies were lured in by the promise of striking it rich in a new modern gold rush, but they were shortsighted.

As we’ve already noted, ramping up mining to match the demand would be impossible. It would require a monumental investment in infrastructure, not to mention cooperation between every mining operation on the planet.

No, the solution to this upcoming crisis will require a complete overhaul of the industry. Mining can continue as normal, but I’m expecting it to quickly dry up as this new technology becomes more cost-effective.

Thanks to a small company that is currently exploding throughout the U.S., we can achieve a nearly infinite supply of raw lithium without digging a single mine.

The technology behind it is startlingly simple, but so far no one has managed to successfully bring it to market.

Right now, analysts estimate the total industry value at just under $1 billion. Looking forward, that total is expected to hit $3 billion by 2026.

If you ask me, that's a lowball estimate, especially considering the market for lithium ion batteries is currently valued at around $40 billion. 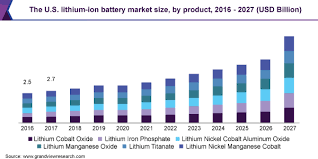 I can't overstate how important this technology will be. Going forward, it might even become mandatory for anyone who wants to sell a lithium battery.

I highly recommend you check out this company’s plan to avert our next upcoming crisis. But move quickly — before you know it, the golden opportunity will have passed.