The Cost of Progress in Solar Power

It would be fantastic if more things were free.

Just think of how much more money you’d have if you didn’t have to pay for your daily coffee, your Internet, or your electricity!

Unfortunately, that’s not how the world works. Even things that seem like they should be free, things we rely on daily, all cost money.

Take solar energy, for instance. Some seem to think it shouldn’t cost anything to use.

But there’s a lot more that goes on with solar energy production than just gathering sunlight. And while the efficiency of these systems is growing fast, there’s one aspect that’s not keeping pace: the price.

The biggest problem with solar power is that it’s intermittent. We can only get energy from it when the sun is shining, which means we’re out of luck if it’s shady, cloudy, or nighttime.

But those batteries come with their own cost and can, in fact, add to the end cost of the energy itself.

Right now, the price of electricity generated from PV solar is about 12.2 cents per kilowatt-hour in the U.S., only slightly higher than the average cost of retail electricity at 12 cents per kWh across the country. 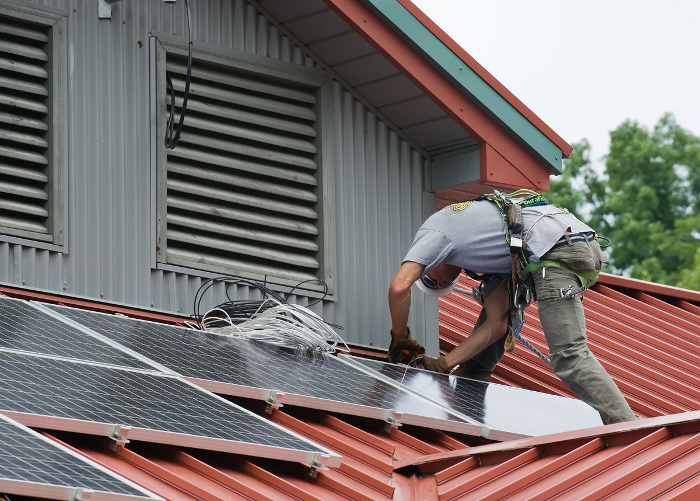 That cost is expected to drop dramatically within the next few years — some estimates say to only a third of today’s price by 2020.

At that point, it will be even cheaper than most fossil fuels. In some places around the world, it already is!

Keep in mind, though, that these prices are based on the levelized cost of energy (LCOE), which has a few limitations when calculating the lifetime cost of a power plant.

LCOE accounts for everything from construction to fuel costs and includes any monetary incentives a power source may receive. However, it can’t account for outside influences on the price of energy.

With non-renewable sources, the LCOE can take into account fluctuations in the price of the fuel, since these can be estimated through seasonal supply-demand cycles or projected market conditions.

But renewables? Not so much.

The weather is harder to predict than the market, which should bring the point home to any investors out there who have tried timing a stock before.

Depending on what kind of technology you’re using, solar could either be cheaper than coal, gas, and nuclear... or it could be one of the most expensive energy sources out there.

The U.S. energy grids are in dire need of an upgrade. They needed it long before solar and wind got so popular, and they need it even more now.

The cost to integrate solar and wind into any grid is so high because it’s intermittent. Grids have to be built to handle demand balancing, which is hard to manage when your power source is dependent on the fluctuating weather.

A study done last year found that once renewables reach about 20% of an area’s energy mix, these integration costs begin adding to the end cost of energy significantly.

So the more solar that’s installed, the more expensive it becomes...

If more installations mean higher costs in the end, what’s the point?

For one, the global clean energy movement is already well underway. No matter what Trump says, nearly 200 countries signed up to cut emissions over the next few years, and most are sticking to it.

Meanwhile, efficiency increases are bringing down the LCOE of solar all the time. Given enough time, it will all even out.

For countries like China and India, whose reliance on emissions-heavy coal is quite literally killer, temporarily increased energy costs are the least of their worries.

In late 2016, India announced that it had brought online not only a new large-scale solar farm, but the largest one in the world.

At 648 megawatts of capacity, the Kamuthi plant can cover the energy needs of an estimated 150,000 Indian homes. It brings the country’s installed solar capacity to more than 10 gigawatts.

India is already facing issues paying for its next big project, which includes another 1.2 GW of solar energy installations. The work has already been contracted to a number of solar companies, but investment in the country’s weak, and sometimes non-existent, energy grid are necessary to move forward.

But move forward it will; having the world’s largest single solar farm was just the first step.

Then there’s the ever-increasing number of oil majors moving to install more solar to wean themselves off of dependency on the fossil fuel.

Saudi Arabia is just one example. The country plans to have 41 GW of solar capacity installed by 2032, enough to cover roughly 20% of the country’s energy demand.

Recently, fellow OPEC member United Arab Emirates hopped on the bandwagon by announcing that it will invest as much as $163 billion in alternative energies over the next 30 years.

This spending likely will include grid improvement and integration costs, which brings solar’s low LCOE back into play.

Utility-scale systems paired with energy storage have the lowest lifetime costs, and it will be those systems that will see the most growth in the next few years. Investors with an eye on energy would be wise to start looking into strong solar and battery storage — read: lithium — positions.

Solar energy and the storage tech that makes it viable are things we can start banking on right now.