The ultra-wealthy have a lot in common. They're typically hardworking, smart, and personable. They tend to be independent thinkers and good salesmen. They also tend to read a lot.

Warren Buffett is said to read for as much as 80% of his day. Bill Gates says he reads 50 books a year. Jeff Bezos clearly has some love of books –– remember Amazon began as an online bookstore.

Steve Siebold, the author of How Rich People Think, writes:

Walk into a wealthy person's home and one of the first things you'll see is an extensive library of books they've used to educate themselves on how to become more successful.

So what books do billionaires read?

Well, everything. The wealthy read everything from Adam Smith to John Steinbeck. One of Buffett's favorite books he has talked about throughout his career is Benjamin Graham's The Intelligent Investor. Elon Musk has William Golding's Lord of the Flies and Isaac Asimov's Foundation on his favorite book list. Meanwhile, on Jeff Bezos' shelf you'd find books ranging from Kazuo Ishiguro's The Remains of the Day to autobiographies of business leaders like Sam Walton.

But if you were to pay close attention to the books that the ultra-wealthy talk about, there's one that stands out as oddly common: Napoleon Hill's 1937 Think and Grow Rich. 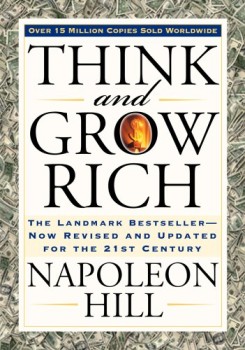 I wouldn't be surprised if you've heard of this book yourself. It's one I've heard a lot about over the years but never actually read until a few years ago. I'd written it off as just another self-motivation guide,  one of the millions.

But after seeing Think and Grow Rich on so many billionaires' recommended reading lists over the years, I gave it a read. And I can say now with certainty that... yeah it's just another self-motivation book.

However, to the book's credit, it's the best self-motivation book I've ever read. And I can see why it's so popular. But at the end of the day, that's all it is, a self-help guide.

In the book, Hill talks about a “secret” used by the most powerful people in history, including Dale Carnegie, to gain their massive fortunes. He dangles this secret in front of the reader like a carrot on a stick throughout the text, chapter by chapter, before only vaguely explaining.

So what is Hill's secret?

In short, Hill's secret is this: positive thinking.

Hill's philosophy has many names. Sometimes it's called having a positive mindset or mental attitude. Other times, it's called the Law of Attraction. But the core idea is the same: Thinking positive, or having an optimistic outlook, is very often said to attract positive changes in one's life.

Hill is actually credited as being the first to introduce that concept in Think and Grow Rich, claiming that positive thinking can attract wealth.

The idea of there being a secret method to wealth through positive thinking has been recycled over and over ever since. Most recently, in 2006, the idea was rehashed into another book simply called The Secret.

Call me a skeptic, I'm not so sure positive thinking alone attracts wealth.

Now, I wouldn't argue that having a very negative attitude is not conducive to making allies needed to build wealth. But realistically, positive thinking alone probably isn't going to bring wealth into your life.

The real secret to wealth is simply common sense. There's no flawless investment system or membership required to becoming wealthy. Vision boards and wishful thinking are mostly a waste of time. There's no magic involved in wealth.

The secret to wealth is investing wisely (or being lucky) and earning more money than you spend.

That's it. That's the big secret.

Are you disappointed? Yeah, me too.

The way to become really wealthy is through consistent gains over a long period of time. Wages are consistent and earning money in this way is the most common form of income for most people. But wages aren't usually enough to make a person wealthy. If you want to be rich, you'll need to invest.