Exactly one day before Russia invaded Ukraine, a major South American nation announced it was building a 400-mile-long gas pipeline from the fastest-growing oil-and-gas shale basin on the planet.

That nation was Argentina.

And the $5 company I’m going to tell you about will be pumping a lot of its gas through that very pipeline.

The company practically already has guaranteed customers for its energy… even before it gets to its final destination.

You see, as the war between Russia and Ukraine drags on, Western nations are beginning to cut off every ounce of Russian energy exports, pushing gasoline prices to record highs. This is a chart of retail gasoline prices you and I pay at the pump:

It’s not a pretty picture. And I hate to say it, but it’s about to get even worse.

The sanctions against Russian oil and gas cut off the world’s No. 3 oil producer and second-largest gas exporter.

But here’s the bitch of it all.

Over the weekend, the BBC reported that a former top economic adviser to Putin said that a “real” embargo on Russian oil and gas would most likely end the war in a month or two.

Dr. Andrei Illarionov said if Western countries "would try to implement a real embargo on oil and gas exports from Russia... I would bet that probably within a month or two, Russian military operations in Ukraine probably will be ceased... It's one of the very effective instruments still in the possession of the Western countries."

While the oil and gas trade has continued during the conflict, widespread sanctions mean that a lot of other economic activity has stopped and exports have been disrupted.

One recent survey by Russia's own central bank even forecasts the economy will shrink by 8% this year, while the International Institute of Finance says it could fall by as much as 15%. That would be brutal to Russia's economy.

Dr. Illarionov suggested that Putin was prepared to endure a hit to the economy and that:

We believe Western governments are prepared to put the squeeze on Putin.

And they’ll do so by encouraging oil and gas producers, even the American frackers and oil sands in Canada, to come to the rescue.

But it’s going to take some time, so get used to higher prices at the pump.

If that wasn't already bad enough, the global economy is about to take another hit — a double-barreled shotgun hit, in fact.

As you read this, the Chinese government has implemented a hardcore lockdown in Shanghai over rising COVID-19 cases.

Shanghai is home to some 26 million people, and residents are prohibited from venturing outside their homes, even for basic necessities like food and medicine.

They’re not even allowed to take their dogs outside for walks. That means millions of dogs are literally shitting in houses and apartments inside the city.

Today's high in Shanghai is forecast to reach 91 degrees. Can you imagine the smell in a high-rise condo complex after a two-week mandatory quarantine?!?

Regardless, prices of everything are skyrocketing, especially energy. And you can count on that to continue.

That’s devastating to everyday Americans who fill up their gas tanks an average of twice a month.

Americans are getting desperate.

In fact, so many Americans were recently crossing the border into Mexico to buy gasoline that the Mexican government recently put a stop to it…

This couldn’t have come at a worse time.

When the Biden administration took office, it wasted no time in attacking the oil and gas industry. It hated these companies and has said so publicly.

So energy prices will remain high for a very long time as we play catch-up.

That’s why oil and gas producers “outside” of the United States are about to witness a historic bull market.

Energy-starved nations around the planet are looking for other sources of oil and gas to replace Russia.

And Argentina will be one of them.

You probably didn’t know this, but there’s a second shale revolution happening south of the U.S.

Argentina controls the second-largest and fastest-growing oil-and-gas shale basin on the planet. But until now — and with the sanctions against Russia driving up energy prices at the pump — not many investors paid much attention to it. They still don’t today.

On February 23, 2022, the day before Russia invaded Ukraine, Reuters reported:

Argentina’s government launched a tender on Wednesday for the construction of the first stage of a new gas pipeline from the huge Vaca Muerta shale formation, one of the world’s most important for unconventional hydrocarbons.

We’ve actually dubbed the basin “Project Petrogonia” because it’s so massive and because of its proximity to Patagonia.

Here’s an actual picture of the project taken by a NASA satellite: 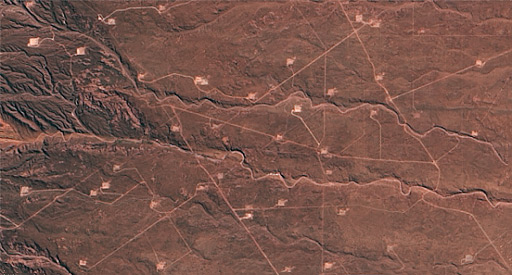 All of those square dots you see are actually drill sites in Project Petrogonia.

This is going to be a huge shale oil- and shale gas-producing region, second only to the United States, and personal fortunes will be made if you act now.

The company behind this massive play is up 34% since the start of the Russia-Ukraine war and up 71% since November — the month Russia mobilized 100,000 soldiers and hundreds of tanks on the Ukrainian border.

Much bigger gains are coming as the war and sanctions could drag on for months, if not years.

If you want a second chance at the staggering shale profits we enjoyed from 2007–2011, my top natural resource expert has prepared an exclusive and proprietary presentation analyzing the opportunity for you.

I urge you to give it a look.