John Broder has been outed as a fraud.

In what was supposed to be a typical test-drive and analysis, Broder reported the Model S did not perform as expected, and even had to be towed after the battery died.

The dramatic story Broder manufactured was quickly picked up on news streams all over the world...

The report was so damaging, some analysts actually believe it affected Tesla's (NASDAQ: TSLA) stock price, which took a temporary nosedive following the release of the story.

Only problem was that the article was a complete fabrication. And if it wasn't for Tesla CEO Elon Musk being the savvy billionaire he is, Broder would've gotten away with it.

But as luck would have it, the Model S Broder test-drove was equipped with a sort of “black box,” which recorded nearly everything on to a series of driving logs. And as Musk pointed out in a blog, after reviewing the data, it was clear that Broder worked very hard to force the car to stop running.

According to Tesla's data logs, the battery never ran out of energy at any time —  even when Broder called a flatbed truck to retrieve it.

Charge Your Car in 10 Minutes

It didn't take long for Broder to get outed — not only from Elon Musk, but from other Tesla Model S owners who drove the same route with zero problems.

The Model S even landed Motor Trend's 2013 Car of the Year!

Now in my line of work, it's always the manipulative naysayers that fire me up. Fortunately, there always seems to be plenty of good news in the world of electric vehicles to quickly extinguish my disgust...

In fact, while the Tesla Model S review debate raged on last week, big things were happening in California, where new research by the University of Southern California has led to the discovery of a new battery design that, according to researchers, could charge a typical battery found in an electric car in as few as ten minutes — while holding on to three times as much energy as conventional designs found in commercial use today.

In the meantime, another major car manufacturer is bringing yet another electric offering to the table...

I've actually written about this one before: It's Volkswagen's XL1 diesel plug-in hybrid, which delivers a fuel economy of 261 miles per gallon. That's right...

And last week, the German automaker announced it's actually going to begin production on the vehicle. 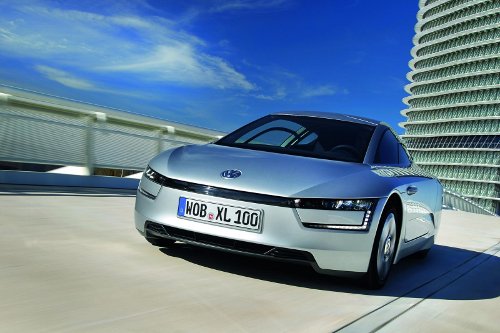 According to Volkswagen, the impressive fuel economy is delivered by integrating a high-tech lightweight design (most of the car is constructed from aluminum, titanium, and carbon fiber), perfect aerodynamics, and a plug-in hybrid system consisting of a two-cylinder engine, e-motor, 7-speed dual clutch gearbox and lithium-ion batteries.

There are a few downsides: For one, if you need room for four, you're out of luck, as this is a two-seater. As well, there is limited trunk space (which is actually under the hood, similar to the Beetle), and the top speed is limited to 99 mph.

But for more than half of this nation's commuting population (with only one driver driving less than 40 miles per day), it's not a bad deal (assuming the price doesn't keep it out of the hands of the middle class folks who would benefit from such a fuel-efficient vehicle)...

I suspect the first run of these will probably cost anywhere between $35,000 and $60,000. And this could definitely limit sales.

As much as I am impressed with the XL1, if I'm going to drop $60,000 on a car, I'm buying a Model S, which would allow me to drive to and from work every day without using a drop of gas — while offering room for seven and, quite frankly, a more stylish and higher-end vehicle.

But I won't jump the gun... because my price estimates could be completely blown out of the water after the company debuts the car at the Geneva Motor Show next month.

Also worth noting is that at next month's car show in Geneva, Audi will be showing off a compressed natural gas car that seems to be getting a lot of early attention from analysts. Certainly additional natural gas offerings in the auto space will only further enhance our domestic natural gas plays, like this natural gas infrastructure stock and these three domestic plays.

We're looking forward to checking out Audi's A3 e-tron Plug-In Hybrid as well. Audi estimates the A3 e-tron will deliver a fuel economy of around 100 mpg, with about 30 miles of all-electric range...

As always, we'll keep you posted.