Diesel generators and batteries have long been the source of backup power for mission critical industries, but hydrogen fuel cells are quickly becoming the go-to alternative. 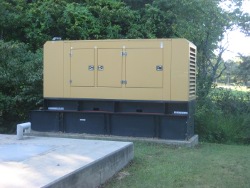 Hydrogen fuel cells are much cleaner and with fewer negative outcomes than other technologies, including greenhouse gas emissions (GHG), low risk of ground contaminants, and lower maintenance costs.

With a more efficient and reliable operation, and with zero emissions, it’s the logical choice for many businesses today.

The way they work: hydrogen and oxygen is combined to produce electricity, with only clean water and heat left behind as byproducts. Fuel cells are far more efficient than any combustion engine, and the hydrogen needed for the operation can be sourced from a variety of places; the cleanest being the electrolysis of water using wind and/or solar power.

That’s ideal, but hydrocarbon fuels like diesel and natural gas --which we have more than an abundance of domestically-- can also be used. We can even use renewable biogas in fuel cells.

Telecommunication companies like MetroPCS, AT&T (NYSE: T), and Sprint (NYSE: S) already rely heavily on fuel cells for backup power at cell sites, and a new fuel cell design can be used in the hardest of these sites to reach: rooftops. A lightweight rooftop fuel cell solution can be easily installed without the use of cranes, and can also be re-fueled from the ground – so no rooftop fuel transports are needed.

Sprint announced last week that it will deploy these hydrogen fuel cell backups for its rooftop cell tower network.

Fuel cells already account for about a quarter of Sprint’s locations, and with this next wave of installation, they will be getting a hand from the Department of Energy (DOE). The exact amount of financial aid is yet undetermined, but should be substantial.

The desired outcome of this partnership is to enhance the development of this economic and viable option that will promote the advancement of hydrogen fuel cells as backup power across many different industries.

Once the DOE proves fuel cells are a cleaner, cheaper power source to buffer against outages, other businesses are going to have to take notice.

Sprint has already deployed approximately 500 hydrogen fuel cells in their network. With this new program it’s hard to pinpoint just how many more they could add – probably a lot more if the program is going to be used as a case study for the Department of Energy.

Sprint was a logical choice for the DOE to team up with – it’s not their first rodeo together – in 2009 the DOE provided a $7.3 million grant for Sprint to support fuel cell technology.
It’s also important to note that it was Sprint who pioneered fuel cell technology to its ground-based networks in 2005.

A full scope of the project is expected in the next 60 days, and should begin seeing its rollout by the end of this year.

The company has already announced publicly that it will eventually like to replace all of its existing backup systems with fuel cells, and has stated that it will reduce its GHG emissions by an absolute 20 percent by 2017.

While Sprint has laid clear plans for its future backup systems, it's not the only company with this bright idea. AT&T and MetroPCS both have been working with fuel cells for many years now.

AT&T acquired its first fuel cell in the 1990s and now has hundreds more to back up its network across the U.S. Their installations started taking off in 2009, much like Sprint, with funding from the American Recovery and Reinvestment Act (ARRA) through the DOE.

AT&T is now planning to install 17 megawatts of fuel cell power at 28 sites in California and Connecticut, according to altenergymag.com, including some at its data centers.

And if you think the other guys are committed to fuel cells, it is MetroPCS (owned by T-Mobile (NYSE: PCS)) who has the largest network of fuel cell systems in the telecommunications industry with close to 2,000 fuel cells in California alone.

As for companies like Verizon (NYSE: VZ), they’re still using diesel generators made by Cummins (NYSE: CMI) and others.

For dense urban areas, space is often scarce and interference is high. Not every site is going to be accessible by truck, so you have to wonder when Verizon will jump on board, or just what they’re thinking by lagging behind.

Verizon could get stuck behind the eight ball if there's a significant power outage, and it has to rely on tons of diesel generators.

Sprint, on the other hand, has been praised and honored as the most “eco-focused” wireless carrier in the U.S., and it continues to carry on that tradition. AT&T and MetroPCS are right there behind it.

The industry as a whole has ordered or installed roughly 3,000 backup fuel cell systems nationwide, and that’s just the beginning.

Other companies are moving in too – Apple (NYSE: AAPL) and eBay (NASDAQ: EBAY) being two big names. Supermarket chains like Whole Foods (NASDAQ: WFM) and Safeway (NYSE: SWY) recognize the need, and hopefully, as hydrogen fuel cells continue to spread, we’ll see them popping up in hospitals where electric power can be the difference between life and death.