The buzz is all buzzed out, and all the hoopla hooped out.

There is no hype surrounding solar anymore.

These days solar energy mostly gets lumped together with other fossil fuel alternatives and tossed around in discussions about climate change.

The parade for solar energy is over.

But now the real game can begin.

Because despite the lack of media fanfare, the solar industry is quietly booming.

According to new data from the Solar Energy Industries Association, the U.S. solar market surpassed 2 million installations in the first quarter of 2019.

Just three years ago, there were 1 million solar installations in America.

In the next two years, the SEIA says U.S. solar installations will top 3 million and double from current levels by 2023, reaching 16.4 gigawatts in capacity. 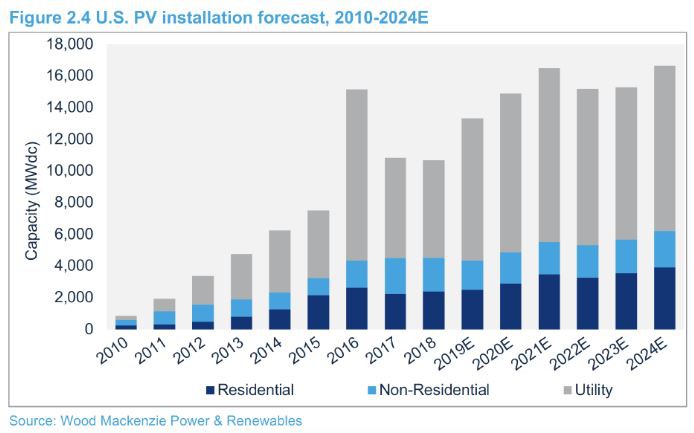 Based on similar growth estimates for new installations, market researchers forecast a Compound Annual Growth Rate of over 20% during the 2019 to 2023 period.

Even OPEC, whose business is almost fundamentally opposed to solar energy, says renewables like solar remain the fastest growing sector in the energy market.

The solar market is maturing. And companies need to mature with it. That's why SunPower (NASDAQ: SPWR), one of the largest solar panel manufacturers in America, recently decided to split the company into two separate entities.

The first company will retain the name SunPower, but it will no longer be in the solar panel business specifically. Instead, SunPower will focus its efforts on the energy storage and services side of current operations.

The firm's manufacturing and marketing solar panel business will be spun off into a newly formed company called Maxeon Solar. This will allow both companies to specialize in different markets.

Tom Werner, president and CEO of SunPower, said of the split:

We believe that the solar industry is entering a period of extended growth where success will be driven by value chain specialization, technology innovation and economies of scale. This new structure and investment will create two focused businesses, each with unique expertise to excel in their part of the value chain.

The newly formed Maxeon will own and operate solar cell and panel manufacturing facilities in France, Malaysia, Mexico, and the Philippines and will also maintain research and development, marketing, and sales outside of the U.S. and Canada.

SunPower shareholders will receive a 71% stake in Maxeon Solar.

The move was met positively by investors. Shares of SPWR jumped more than 5% in premarket trading Monday after the split was announced.

With its manufacturing spun off, the new SunPower is free to focus on what has increasingly occupied its time, which is its downstream presence. SunPower has built a powerful presence through dealer network, which includes companies who only sell and install SunPower products.

Yet some see difficulties ahead for the newly formed Maxeon Solar. SunPower has struggled to profit for years due in part to foreign competition and declining prices for solar cells. Meanwhile, the U.S. government will pull back on the investment tax credit for solar panels next year from 30% to 26%, adding consumer sales concerns.

Avi Salzman writes in Barron's, “The new corporate structure doesn’t fix some of the larger problems that Sunpower faces, from its struggles to post profits to its reliance on inconsistent government subsidies.”

Overall, shares of SunPower present investors with a mixed bag. The company's financials aren't great, and based on past price performance, shares seem to be somewhat risky. However, market fundamentals for solar are strong, and Maxeon Solar will likely become the premier name in the solar industry.