The schools make money, the government makes money, and the students get screwed.

It's a little hard these days to feel empathy for college students. There is a subset of this group that has simply lost their minds.

Victim bullies have stormed the ivory tower. This mob madness started at Mizzou, where the chancellor resigned over rumors and a fecal swastika. At Yale, a spoiled brat screamed at a Master of an undergraduate college because his wife suggested that they shouldn't get upset about Halloween costumes.

This isn't Rosa Parks on a bus or Gandhi making salt we are talking about here.

But that didn't stop the hysteria. These protests have quickly spread to hundreds of colleges and universities nationwide.

According to the LA Times:

Last week, the dean of students at Claremont McKenna College left the university after students protested her comments to a Latina student with the offer to work for those who "don't fit our CMC mold."

Tuesday night, Jonathan Veitch, the president of Occidental College, said he and other administrators were open to considering a list of 14 reforms, including the creation of a black studies major and more diversity training, that student protesters had drawn up.

Students at USC have similarly proposed a campus-wide action plan, which includes the appointment of a top administrator to promote diversity, equity and inclusion.

Nationwide, complaints of racism and micro-aggression are feeding Facebook pages and websites at Harvard, Brown, Columbia and Willamette universities, as well as at Oberlin, Dartmouth and Swarthmore colleges.

Protesters at Ithaca College staged a walkout to demand the president's resignation.

Administrators are being forced out by PC mobs and Social Justice Fascists.

Don't get me wrong; the kids should be pissed, but not at some 1960s ghost of racism. They should be pissed at the $40,658 in tuition and fees that Ithaca College charges for just this school year.

What kind of fool would pay that much money to send their child to a place that teaches ideas last found in China's Cultural Revolution? 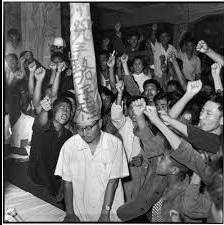 I'd like to think that folks send their brats to college because they are tired of their crap at home...

But it's probably because parents love their children and want to see them do well in life.

There are lots of benefits to a higher degree. The average salary of someone with a bachelor's degree is $63,000, compared to a person with a high school diploma at $32,500. If you go into debt of $100,000, it will pay for itself in a little over three and a half years on average.

Furthermore, studies show that college graduates are happier, have more satisfaction in their jobs, stay at their jobs longer, have a greater choice of careers, are smarter, and make better choices.

Even with all its troubles, 97% of parents have a favorable view of college.

Of course, only 52% of people who start college finish. Those that come close and then drop out can end up with $100,000 in debt and no degree. You'll find these people schlepping alongside high school graduates at your local Starbucks (NASDAQ: SBUX).

There is now $1.4 trillion in student loans outstanding. That is higher than credit cards, car loans, or any other debt in the U.S. with the exception of mortgages.

University is expensive for a number of reasons — admin bloat, new buildings, and low cost control, to name a few.

If you subsidize something, you will get more of it. 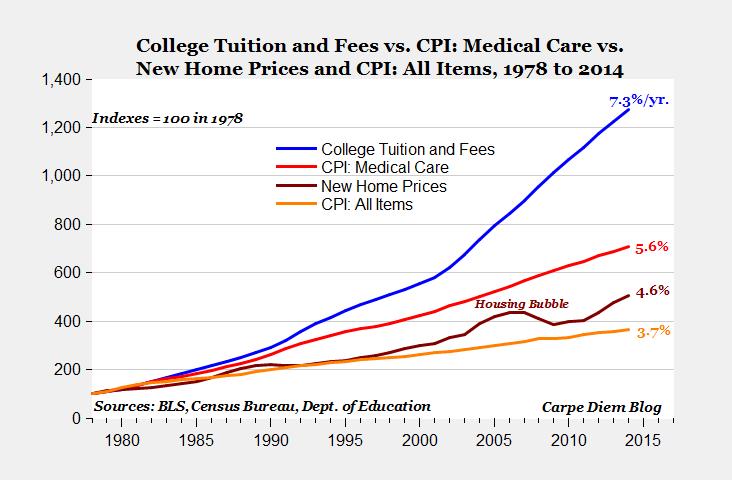 The university system is now a cash cow. Administrators would rather have an out-of-state or foreign national pay triple the rate of tuition than an in-state student, thus shutting out taxpayers and citizens from their own schools.

According to the Wall Street Journal:

There are 1.13 million foreign students in the U.S., the vast majority in college-degree programs, according to a report to be released Wednesday by the Department of Homeland Security. That represents a 14% increase over last year, nearly 50% more than in 2010 and 85% more than in 2005.

It would seem that even if the United States government capped student loans — which the current Congress is attempting — then tuition would still go up given the ever-larger pool of international students from which to draw.

One thing the U.S. does well is higher education. It dominates the list of the top 100 world schools.

Let's face it: Tuition will continue to rise until it stops being cost effective. As it stands now, the lifetime earnings for college is well and above the cost of tuition, and there is lots of room to grow. The Treasury estimates an additional $1 trillion in direct student debt over the next decade.

And last but not least, you should know that the government expects to make $135 billion from student loans over the next nine years as current debt comes due.

What you may not know is that you can profit from this non-profit cash grab. I'll tell you more about this unique opportunity in the next few weeks.

Storm Profits
DeHaemer tells you how you can make 270% on the next hurricane.
Fear and Loathing at the MoneyShow
DeHaemer talks gold fear and loonie loathing at the Toronto MoneyShow. It was after midnight at the Moose Bar when the beer kicked in...
Black Debt
DeHaemer writes about the state of the global market, Saudi cash, Putin nationalism, and what to buy when the chickens come home to roost.
Hydrogen Fuel Cells: The Downfall of Tesla?
Lithium has been the front-runner in the battery technology market for years, but that is all coming to an end. Elon Musk is against them, but Jeff Bezos is investing heavily in them. Hydrogen Fuel Cells will turn the battery market upside down and we've discovered the tiny company that is going to make it happen.