One of the most famous home runs in World Series history happened on October 1, 1932, during Game 3. The New York Yankees were battling the Chicago Cubs. The Yanks were up 2–0, and the series moved to Game 3 at Wrigley Field.

Charlie Root was the Cubs pitcher. He gave up a three-run homer to Babe Ruth in the first inning and a solo shot to Lou Gehrig in the third.

The Cubbies would score a run in the first, two in the third, and another in the fourth. So after four innings, the score was tied at 4–4.

In the top of the fifth inning, Joe Sewell led off for the Yankees and grounded out to short. The Babe stepped to the plate. The Cubs’ bench was giving him the business. Babe yelled back at them.

The count fell to two balls and two strikes. Ruth pointed two fingers toward center field and then knocked the next pitch a country mile, deep in the center field cheap seats.

It was arguably the greatest predictive call in sports history.

Today, we are going deep with my predictions for the stock market in 2020.

The 5G rollout is happening now. Phones will become 100 times faster. Cable TV will be a thing of the past, as streaming goes mainstream. Apple is launching its first 5G iPhones. Massive cord cutting will benefit Verizon and AT&T. Chip companies and cell tower REITs will also benefit.

Despite being cut in half last year, Bitcoin still leads all other asset classes this year with a 95.5% gain. It will take on another 50% gain next year as the block rewards for creating new Bitcoin get cut in half in the middle of the year. That said, the bottom isn't in yet. It will fall more before it goes up.

The PHLX Semiconductor Index (NASDAQ: SOXX) has soared 55% this year. The run will continue, as the market expects that 450 million smartphones will be shipped in 2021 and 750 million in 2022. The reduction in China trade tensions will help. Intel (NASDAQ: INTC), Micron (NASDAQ: MU), NVIDIA (NASDAQ: NVDA), Marvell (NASDAQ: MRVL), and Qorvo (NASDAQ: QRVO) give you equity exposure.

4. The Federal Reserve Will Hold Steady

The Fed announced no change in interest rates at the Federal Open Market Committee at the last meeting. The election year will keep the Fed from acting. However, it will continue to add liquidity in the form of its “Not QE4,” which has added more than 1 trillion to the markets over the past few months. Major banks such as JP Morgan Chase (NYSE: JPM) and Bank of America (NYSE: BAC) will continue to do well.

Russia has a solid balance sheet, its debt to GDP is just 13.5%, and it has reduced inflation below its 4% target. The ruble is up. New oil and gas pipelines to China and Germany will see continued gains in Gazprom. 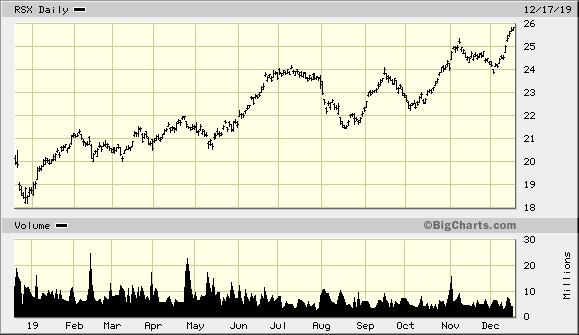 6. Greece Has Finally Turned the Corner and Had the Best Emerging Market Return of Any Country

Ten years ago, Greece was in its deepest post-World War II depression. Now it is experiencing organic recovery based on smart policy changes.

The country’s new prime minister, Kyriakos Mitsotakis of the centrist New Democracy Party, has initiated a package of reforms to improve the Greek business climate and attract foreign direct investment, including tax cuts, a streamlined welfare system, and an accelerated repayment schedule for the country’s IMF loans.

The Athens Stock Exchange composite index is still down by 83% from its 2007 peak, and GDP is off by 25% from that time.

However, Greece PMI is over 50. Consumer confidence is the highest level in two decades. FDI is up, and bond yields have fallen below Italy’s.

New international shipping rules on fuel oil will push the cost of low-sulfur fuel oil much higher. It is already happening. On November 3, Saudi Aramco raised its price for Arab Extra Light by U.S. $4.65/bbl over its commodity-grade Arab Heavy for December sales into Asia. Note their September premium was $1.05/bbl, with October’s rising to $2.65/bbl. This trend will continue. Here’s how to profit from it.

The use of financial technology coupled with big data and artificial technology will continue to push benefits to the consumer and profits to the companies that have scale. Transaction speed will increase as well as targeted advertising and peer-to-peer payments. The world is going cashless, and Zelle will be your new friend. Companies like Ant Financial, Xero, and SoFi will continue to grow. ARKF is the ETF. 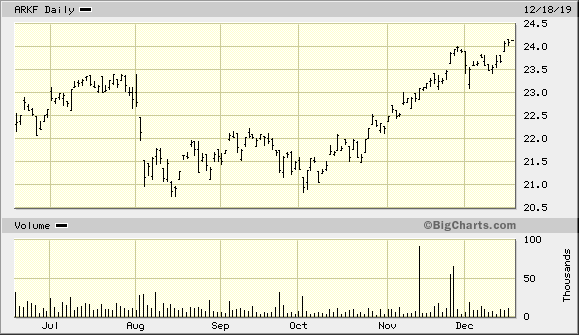 Those are my Ruthian calls for 2020. Have a great holiday.

Cheap Stocks for the Next Big Tech Wave
There’s a huge wave of technology coming fast. It’s the fifth wave of telecom, and it’s called 5G. Energy and Capital editor Christian DeHaemer shares three blue chip 5G stocks to own now.
When the Man Comes Around
Energy and Capital editor Christian DeHaemer discusses the things he learned at the MetCoke Summit 2019 in Nashville. And one major takeaway was that no one knows what will happen with the IMO 2020 sulfur cap. He tells investors how to profit.
Three Trends to Own Now
Energy and Capital editor Christian DeHaemer makes his predictions on the markets using time-tested models, historical research, and a broad knowledge and practical experience of how markets work. Here are three trends you want to own for 2020.
Hydrogen Fuel Cells: The Downfall of Tesla?
Lithium has been the front-runner in the battery technology market for years, but that is all coming to an end. Elon Musk is against them, but Jeff Bezos is investing heavily in them. Hydrogen Fuel Cells will turn the battery market upside down and we've discovered the tiny company that is going to make it happen.