Blood in the Frack: Argentina Shale

Fracking and horizontal drilling have failed in nations such as Poland, Argentina, Great Britain, and China for a number of reasons including geography, costs, knowledge of the process, and political will.

China has invested heavily in shale gas drillers but doesn't expect to catch up to the U.S. for 10 to 15 years.

At the same time, North American fracking has been tremendously successful. Fracking in Canada and the United States is shaking up the global energy marketplace at a rate not scene since the 1970s.

And there will be more hydrocarbons pumping out of Mexico when it opens its markets next year. 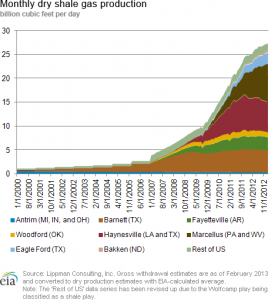 Argentina, for the most part, has been forgotten. There are very good reasons for this. The country just defaulted on its debts for the second time in 12 years, and the government of socialist President Fernández de Kirchner is pathetic at best.

Inflation is high, the currency has devalued, and workers are calling general strikes.

In 2012, Kirchner nationalized the nation's largest energy firm, YPF, which was then owned by Repsol of Spain. You see, production had fallen when price caps were put on sales. In other words, Repsol couldn't make money, so it stopped producing oil.

After a fight, Repsol lost $5 billion in market cap and sold 51% of YPF for $5 billion in bonds to the Argentinean government. Morgan Stanley bought 12% of YPF.

Obviously, investment in Argentina fracking died at that point. Currently, Argentina imports about $12 billion a year in oil and gas. A lack of financing has left domestic reserves untapped.

That said, more recently, the country has had a tough lesson in economics and now has extended tax and currency incentives to entice foreign investors to the energy sector — in effect giving new oil investors everything Repsol wanted two years ago.

And because money likes to go where it's most loved, foreign investors are moving in.

Billionaire George Soros knows a good deal when he sees it and has invested $450 million in YPF's ADRs (NYSE: YPF).

George is taking the risk not only because of new, kinder tax laws, but also because Argentina has an estimated 27 billion barrels of technically recoverable oil and 802 trillion cubic feet of shale gas.

This is located in Vaca Muerta, a huge shale formation in the Neuquen Basin that is the second-largest shale gas deposit and the fourth-largest shale oil deposit in the world. Estimates show it could be worth $3 trillion — that's trillion with a “t.”

Not only is there plenty of upside in Argentina stocks, but the U.S. dollar goes a long way. Five years ago, you used to get 3.5 pesos to the dollar — today you can get 8.4. That's bad for those who are holding pesos but good for buyers of hard assets.

YPF has a forward P/E ratio of 10.85 and a market cap of $13.67 billion. Quarterly revenue growth is 61%. Obviously, if the estimated $3 trillion in reserves is anywhere near close, this company has plenty of upside.

Furthermore, Argentineans will vote in October 2015 to choose a replacement for Kirchner, who is serving the last of her two consecutive terms. All three of the likely candidates are pro-business.

So there is a good chance Argentina will finally catch a break.

Join me, Christian DeHaemer, at The World MoneyShow Toronto this October 16-18! Get the latest stock picks, current market outlooks, most profitable investing and trading strategies, and more when you attend the Show at the Metro Toronto Convention Centre.

Registration is free, so reserve your place today!