Time to Jump Back into Solar Stocks?

Last week, the Chinese government announced it will more than double its installed solar capacity in 2013.

In an effort to help China-based solar manufacturers eat through a massive glut that has pressured margins for more than two years now, the Middle Kingdom is hoping that by consuming its own product instead of shipping nearly everything overseas, it can provide some relief to its solar industry.

Certainly, this will happen. But even with the mountains of cash the government is now plowing into the sector, its still not going to be enough to fix the oversupply problem in the near term...

Yes, it will help alleviate some of the problem — but the fact is most of these companies still aren't making any money this year.

So really, this solar push in China is more about keeping these companies afloat until supply no longer exceeds demand — at least, at this level.

Still, this reality has not kept solar stocks from rallying over the past few months. And quite frankly, I don't know how long it'll last.

But I can tell you most of this recent run has pushed stock values to levels that simply don't make sense. And at some point, they'll have to correct.

Of course, that's not to say all the recent gains in the solar sector are overdone...

High High Can It Go?

Last year I wrote about the coming SolarCity (NASDAQ: SCTY) IPO on a number of occasions.

In September, I told you that we were keeping a close eye on the SolarCity IPO, and would jump on due to the fact that the solar installation business was booming...

Then in October, I told you SolarCity would get a lot of attention after it went public — and that it could be a solar stock that would shine in 2013.

In November, just eight days before it went public, I told you that the big dogs had enough skin in the solar installation game to make SolarCity an IPO worth your consideration.

How has the stock performed since going public? 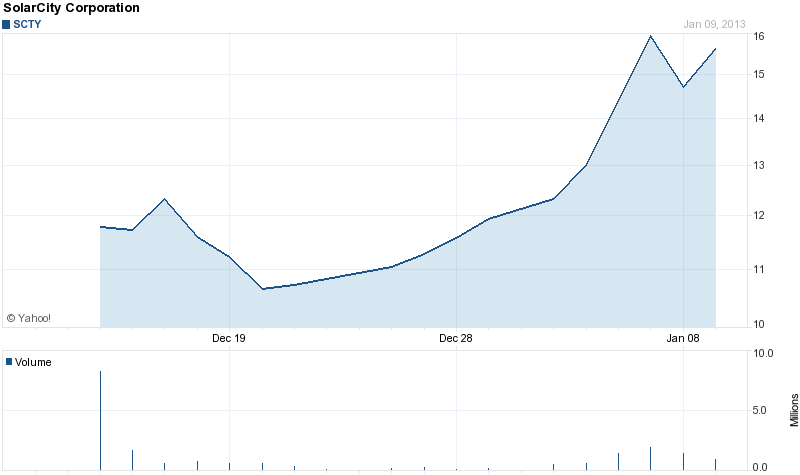 Of course, it didn't hurt that back on January 4, the company announced its rooftop solar installations were set to climb 60% this year, and that it expected to be cash flow positive by the end of the year. On that news alone, the stock jumped more than 10%.

The question now is: How much higher can this thing go?

To be honest, I have no idea. But here's what I do know: I never jump on a falling knife, and I never chase a flying stock.

Although I think SolarCity can be properly valued at around $18 a share, I'd be hesitant about paying more than $15 right now.

Our Biggest Gains This Year

It's funny, but I remember when I first told my Power Portfolio readers about SolarCity all the way back in February...

I received a number of emails from readers who didn't want to touch a solar stock.

There's a very real difference between a solar manufacturer with suffocating margins and a company that generates millions from solar installation and leasing contracts.

Despite the few remaining knuckle-draggers in the media who still haven't figured out that the solar industry is here to stay — and that it will continue to grow by leaps and bounds over the next decade — most energy investors know there's big money in solar installation... particularly with so many manufacturers selling their goods at a loss just to get inventory out the door.

Bottom line: It's never been a better time to be an installer.

And SolarCity does allow for regular investors to get a piece of that action.