Here's How to Hedge Against Solar Market Volatility

Editor's Note: For updated information on the topic, check out Energy and Capital's resource page on solar energy companies.

You like to make money from solar energy investments, right? Take a look at this: 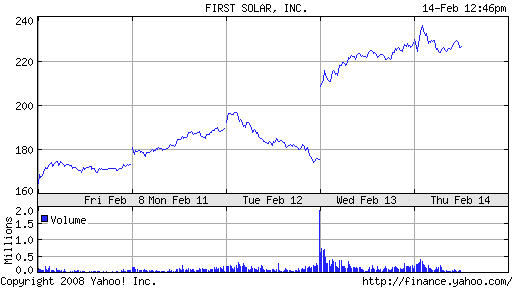 Chances are, you missed this opportunity and the chance for hefty profits associated with it. The same holds true for SunPower Corporation (NASDAQ: SPWR), which climbed from $63 to $83 in the same time, for a gain of 32%. 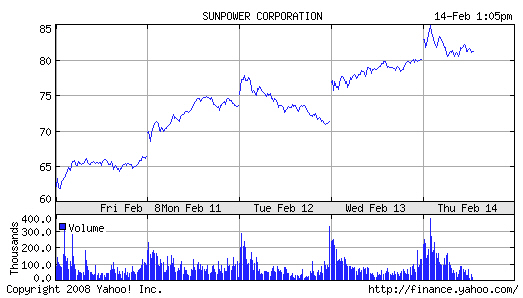 Many of those surges came on Wednesday, when First Solar posted higher-than-expected fourth-quarter earnings. The company unveiled earnings of $62.9 million, or 77 cents per share, compared with $8 million, or 12 cents per share, in the year-ago quarter. At the same time, revenue almost quadrupled to $200.8 million, from $52.7 million in the 2006 period.

Those numbers were much higher than Wall Street analysts projected, and the stock climbed 30% in one day. Many other solar-related stocks followed suit. First Solar's significant rise in revenue can be attributed to four things:

· A boost in production

· Decreased cost per watt and

· Using less polysilicon via a thin film process and

If you didn't get in, don't fret. You'd be hard-pressed to find an analyst who doesn't believe this one is going higher--probably to $260 or $265.

Of course, I always take the long view. So I asked myself what this means for the solar market as a whole going forward.

First off, it means solar energy is getting cheaper, thanks in no part to those lovely ladies and gentlemen on The Hill.

First Solar reported producing solar modules at a cost of $1.12 per watt. While that's not unheard of--Nanosolar has reported doing it for under a buck--it's pretty darn good. And it's the best of any publicly traded company.

This has led to a renewed debate as to when solar energy will reach grid parity--the point at which it's price-competitive with traditional energy sources.

Now, this can be a very long and ugly debate, especially when lifecycle pollution and defense costs are taken into consideration. So I'll just say this. . .

Solar will reach grid parity within the next five years. I'm making that prediction based on extensive research by Stephen O'Rourke, senior analyst covering semiconductor capital equipment and materials for Deutsche Bank Securities.

He based that estimate on the falling costs associated with several photovoltaic technologies and the 4.5% growth rate of electricity prices in the past seven years.

O'Rourke also said the average cost per watt--now hovering around $1.25 will fall to 50 cents in coming years.

Here's a chart of how he sees the solar photovoltaic industry outlook:

He did warn, however, that a shakeout in the industry is likely to occur as the inferior technologies are weeded out. But because demand is going to continue to rise, there's got to be a way to hedge against the coming volatility among solar-related product manufacturers.

And that's where solar installers come in. Opportunities in this space are limited, but some recent IPOs (and some planned ones) are giving savvy investors new inroads to the solar industry.

Learn about one blockbuster opportunity the team from Green Chip Stocks has discovered.