All political power is primarily an illusion... Mirrors and blue smoke, beautiful blue smoke rolling over the surface of highly polished mirrors.

It's a favorite holiday for both the media and the government.

The midterms toss up a big cloud of smoke. And the media and government break out the mirrors.

For them, it's better than Christmas, Easter, and the Fourth of July combined.

You see, while you're distracted by all the local and national political rhetoric, the mainstream media gets to print all the apologizes and redactions to false or exaggerated stories.

It's a time of year for the media to purge their sins through truth — even if they do bury the redactions in back sections.

Over the weekend, news outlets began reporting that one of Justice Brett Kavanaugh’s rape accusers admitted she made up the whole story.

Formally known as “Jane Doe,” it was finally reported that Judy Munro-Leighton told investigators she fabricated the backseat car rape story, saying it “was a tactic” to try to stop Justice Kavanaugh's confirmation. Munro-Leighton said she “did that as a way to grab attention.”

(By the way, do you think there has been any comment from anyone from the #WeBelieveSurvivors movement concerning Munro-Leighton? Ha! Not a chance.)

While the media gets to clean their conscience amid the smoke storm of midterms, the government gets an even better opportunity. It gets a chance to quietly report any negative news, set unpopular regulations, and/or make changes to previously announced plans.

Basically, while you're arguing on Twitter over who will make the best team captains, the government gets to do all the things it knows are unpopular.

Over the weekend, the Trump administration very quietly announced it would exempt eight countries for six months from the Iranian oil sanctions starting today. Those countries include China, India, South Korea, and Japan.

So what's the big deal?

Well, they are among the largest importers of Iranian oil.

Iran sells more than one-third of its oil exports to China and India alone!

There were a handful of people, including me, who saw this coming. Here's a tweet I sent out last week: 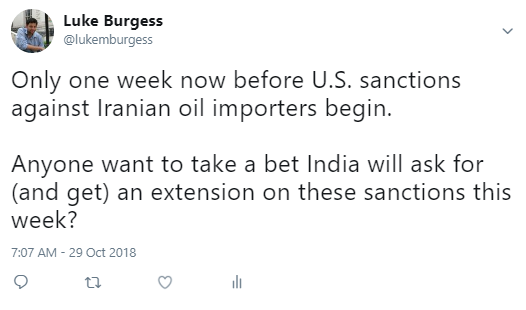 Giving India a six-month exemption from these sanctions is particularly interesting. That's because just a few weeks ago, India decided it would skirt U.S. sanctioning on a separate issue.

On October 6th, India placed an order to purchase S-400 Triumf long-range surface-to-air missile trucks from Russia, worth about $5.5 billion. 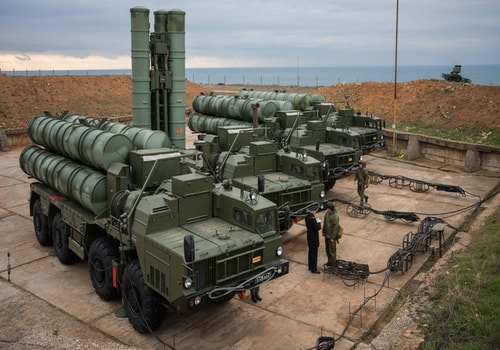 Under the Countering America's Adversaries Through Sanctions Act (CAATSA), India would be subject to sanctioning for this purchase. But it's getting around American sanctions by completing the transaction in rupees and rubles, avoiding using U.S. dollars.

Now, you would think the Trump administration would be at least hesitant to exempt sanctions on Iran oil imports as India so very blatantly evades sanctioning from the Russian weapons purchases.

And do you see what happened here?

Then, only a few weeks later, we did them a favor!

So you can imagine why the administration wants to keep its exemption of India on Iranian oil sanctioning on the D-L.

What exactly was the point of making a big stink over imposing these sanctions on Iranian oil exports, then at the last minute exempting the biggest consumers?

I honestly have no clue.

The only thing I can speculate is that it's all part of some larger negotiation or pacification tactic. Beyond that, I have no idea.

Thing is, that might be the whole point. And I'll get back to that in just one second.

What I can say for sure is that this is a great example of how Trump plays politics:

First, Trump emotionally activates people by saying he's going turn the dial up to 11 on a particular issue. Then he lets his constitutes fight it out for him.

After everyone's punch-drunk on that particular issue, he'll distract them by turning the dial up to 11 on the next issue. Then he'll simply use the confusion and frustration to maintain the status quo.

Trump is playing the role of some kind of quadruple agent. He's a businessman playing the part of a politician who is anti-politics.

Meanwhile, his actions are those of a politician anyway, whose underlying goal is typically to promote the welfare of one particular industry.

It's an absolutely brilliant mindf*ck — great for maintaining power.

Of course, Trump didn't invent the wheel here. Politicians have been playing the smoke-and-mirrors game forever. Whether at war or home, politicians have always used deception to maintain power.

Some of the most successful people in history have used deception so well that we'll never know their true intentions. The Roman emperor Caligula is one such man.

It's told that Caligula once named his horse as a counsel. This would be the equivalent of the President of the United States appointing his dog as Treasury Secretary.

On the surface it seems like a move only a crazy person would make. But scholars still debate today whether or not Caligula was intentionally trying to appear crazy.

You see, if your enemy thinks you're crazy, he won't be able to predict your next move. You become unpredictable. And that can be quite powerful.

Is Trump acting to deceive? My only guess is probably, because no one knows what he'll do next.

Of course, all this deception is great for politicians themselves. And it's great for the media. But I think we deserve better.

What I want is clear and brutally honest truths from both media and government — even if that truth is ugly or uncomfortable. I'm sick of the smoke-and-mirrors bullshit. How about you?