A Pullback in Prices is Opening Up Opportunities

After moving 8% higher in just five days last week, the price of silver has cooled off a little bit.

And this short-term weakness will be opening up some exciting investment opportunities for us in the silver market.

So get your portfolio in order — do whatever you've got to do — it's time to start looking at buying silver stocks again right now.

And I've got another killer silver play for you today that I think will see an easy short-term 30%–40% gain and much larger payouts over the long-term.

The bottom line is this...

Silver's long-term fundamentals are solid. The demand for silver is expected to exceed global supplies this year, driven by a sharp contraction in mine supply.

I mentioned this to you the other day: Global silver supplies from mine production are expected to fall 5% this year.

This will be the first time global silver production has fallen in 15 years!

And going forward from there, the world's silver production is expected to continue falling through 2019.

Silver sold for over $20 an ounce for nearly three solid years. 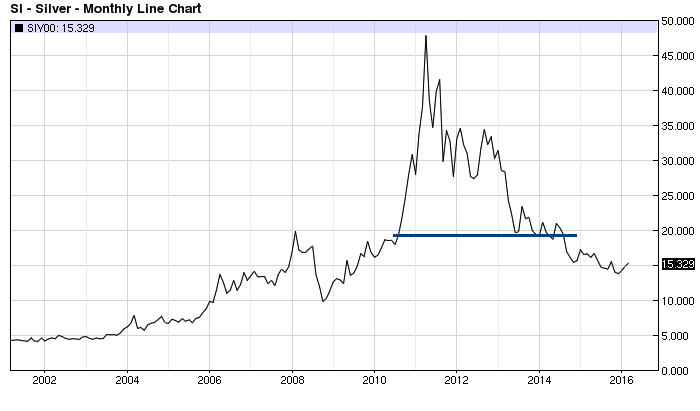 Silver has the legs.

And it has the fundamentals to make it run.

And we're going to be there together to cash in.

As I mentioned, I have another silver mining company that I want you to take a look at.

I really like the way this company looks. But before you buy the stock right now, there are some things to consider.

First, let me tell you just a little about the company and its operations. 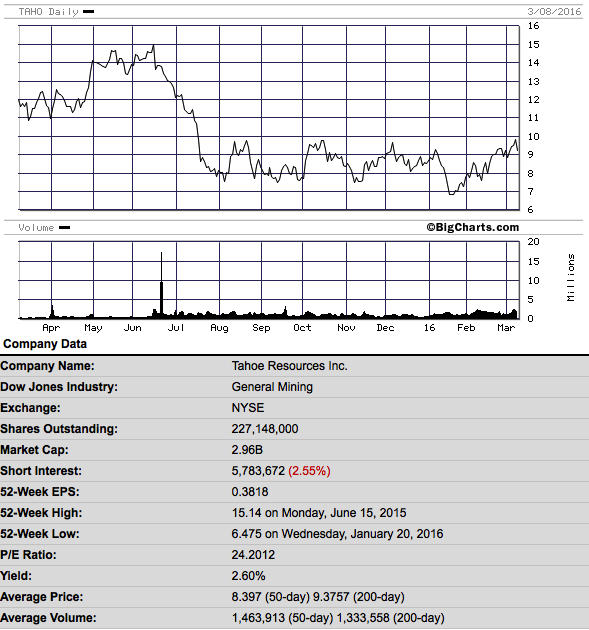 Tahoe Resources is a mid-tier mining, development, and exploration firm focusing on silver and gold production with three main assets in Guatemala and Peru. Let's take a quick look at them...

The Escobal Mine (Guatemala)

Not only is it one of the largest, but it's also one of the lowest-cost silver mines around. During 3Q 2015, Tahoe reported AISC from the Escobal Mine at $9.72 an ounce. And that is in today's market where an ASIC of $15.00 per silver ounce is considered “low-cost.”

The La Arena Mine (Peru)

A gold and copper mine with both oxide and sulfide mineralization. Tahoe is currently producing gold from the lower-cost oxide material. Last year, the company produced 230,000 gold ounces in doré from La Arena. During 3Q 2015, Tahoe reported AISC from La Arena at $729 per gold ounce.

The Shahuindo Mine (Peru)

The company expects annual production to average over 150,000 ounces. In total, the project contains 1.91 million ounces of gold reserves plus an additional 2.28 million ounces in the “resource” categories.

In addition to these assets, Tahoe also owns interests in a few exploration projects; also located in Guatemala and Peru.

This year, Tahoe expects silver production to range between 18 million and 21 million ounces with an AISC ranging between $10 and $11.

Tahoe is expected to release its FY 2015 financial statements today after market close. So we don't have that information just yet.

I think earnings could be on the lower side. Tahoe had $63 million in corporate goodwill in its 3Q 2015 financials, which the company may have had to write off for the fourth quarter. I suspect that some analysts may have overlooked this. And with silver prices down for the week so far, shares of TAHO could experience a bit of weakness following the earnings report.

That's your time to pounce.

Despite any near-term weakness, I expect to see continued growth in silver prices throughout the year leading to significant y-o-y quarterly earnings growth for companies like Tahoe Resources.

This is a stock that I personally just purchased myself.

I bought several hundred shares at $9.77 on Monday. And I would have bought more yesterday on the dip but I simply didn't have the free capital in my account to make a purchase worth it.

I'm looking to take a 30% to 40% gain in three or four weeks on rising silver prices, bullish speculation on 1Q 2016 earnings, and excitement building around the launch of commercial production at Shahuindo. But over the long term, I do think the stock will see higher gains.

At last look, shares of Tahoe were trading at about $9.25. I'm going to try to pick up some more shares while the stock is under $9.50. I think you should too. I'll keep you up-to-date on what I'm doing with my position.

As always, please do your own due diligence. Here is a link to Tahoe's website. Or, to get a quick overview of the company and its operations, check out its latest corporate presentation.