Six days after the presidential election, the International Energy Agency (IEA) projected the United States would become “all but self-sufficient” in meeting its energy needs within two decades.

The reason for this should come as no surprise to you: fracking.

The IEA also said the fracking boom would:

Your editor is a bit skeptical.

Yes, there is a huge shale resource. Yes, new drilling technologies are allowing us to reap more of it than we have before. Yes, there is serious money to be made if you play it right.

But there are a few problems...

The biggest one is that shale plays depend on constant drilling, and the most current production is from the most recently drilled wells.

Think about it like this: In a giant oil field filled with light, sweet crude, you drill a well and then you can extract from it for a long time. You drill a hole, and then suck it out with a straw.

Fracked wells are more complicated. They require constant drilling and injection of pressurized water to release the shale oil from tight formations deep below the earth. This is much more expensive.

It's been shown that if you stop drilling in the Bakken, the wells have a 38% annual decline rate. This means that without constant drilling, a Bakken well will be dead in less than three years... Indeed, this is already proving to be the case.

As the number of wells being drilled in the Bakken has leveled off, the amount of oil being produced didn't level off — it declined: 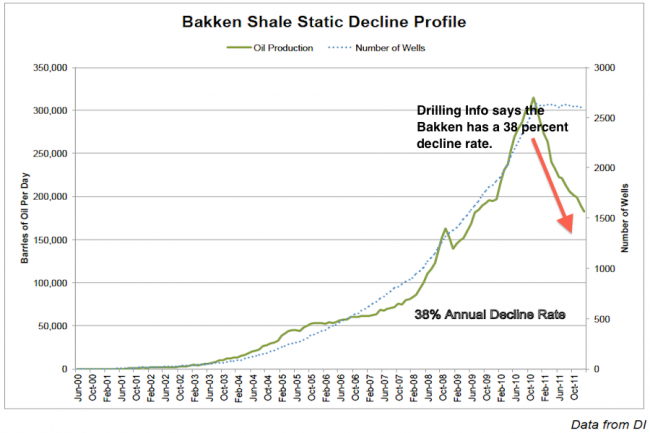 Unlike with conventional fields, you can't maintain constant production in shale plays without constant drilling. And that's expensive.

Oil analyst Arthur Berman of Labyrinth Consulting Services says there was no improvement in Bakken well efficiency between 2010 and 2011; in some cases, it's actually taking increased numbers of wells just to maintain production levels.

He says the same phenomenon is happening in other shale plays, like the Eagle Ford in Texas.

Some will call me a pessimist. I like the term realist.

To become oil independent, we'd have to produce at least another nine million barrels of oil per day.

Right now the Bakken is giving us 6% of that — 575,000 barrels per day — and that's after production has increased there 1,000% in seven years. Think how much it would cost to take that to nine million barrels per day...

Oh, and then have a look at the current trajectory of oil prices:

I checked with Common Sense, and he said prices should be going down if there was enough oil to satiate demand.

As I've been telling you for over half a decade now (this week marks six years for me at the Energy and Capital desk), the remaining oil we have is heavier, sourer, and much more expensive to extract and refine into the products we need. This continues to hold true with shale oil.

Natural gas, however, is a bit different...

Oil is So Last Century

Natural gas has always been oil's bastard brother. It's flared off as a waste byproduct, for crying out loud.

But no more. Natural gas can and should be a critical fuel for the United States and the world.

I like the investment scenario this presents because unlike oil  — which is increasing in price, thereby driving up prices for all its related products — natural gas prices are falling... and expected to remain near decade lows for some time.

What does that mean? It means all of the products associated with natural gas will be cheap, offering higher profit margins to related companies and their shareholders.

What's more, environmental regulations will force 36 gigawatts' worth of coal plants to close by 2022.

Do you think we'll replace them with new plants that burn oil... or natural gas?

They'll be natural gas, of course. More than 60% of new generating capacity between now and 2035 will come from natural gas. They burn clean and are easy to build.

And according to IHS Global Insight, low-cost natural gas in the Northeast and Midwest will boost the country's manufacturing output 5% by 2035. The Youngstown-Warren Chamber of Commerce in Ohio says it's already added 1,500 steel jobs as a result.

Chemical companies like Dow (NYSE: DOW) and Sasol (NYSE: SSL) are coming back after having left in the 1990s. The number of natural gas-fueled cars is growing rapidly. And Shell's (NYSE: RDS) spending $4 billion to build the first gas-processing plant in the Northeast, and could bring as many as 10,000 jobs with it.

Folks, if natural gas were oil, it would cost $25 per barrel.

When I look at the Bakken, Marcellus, Haynesville, Eagle Ford, and Barnett shales, I don't see profits and energy security from oil...

I see it from natural gas.