How to Prepare for the Socialist Invasion of America

Collectively, this is what more than 44 million student loan borrowers owe.

But don’t worry, because there’s a plan to eliminate this debt.

The plan is simple and is picking up a lot of support on social media.

In fact, Senator Elizabeth Warren is making it a keystone of her campaign platform.

The solution for all those folks with student debt?

Yeah, that’s pretty much the solution.

A few weeks ago, Senator Warren posted the following tweet: 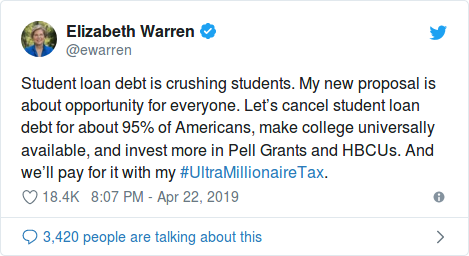 So basically, her solution is theft.

Share your stories using #CancelMyDebt and find out how my plan to cancel student loan debt for 95% Americans that carry it would be impact your life.

Here were some of the responses:

I just love @SenWarren and her Student Debt Cancellation Program. If my student debt were cancelled, I could use the money I spend on it to offset my credit card debt, which I have bc of medical care & living expenses. My generation is trapped by debt. We need help #cancelmydebt

#CancelMyDebt It must be nice living in #Socialist countries where this isn't even an issue. The American system is geared towards slavery. You need college to get a job and then need your job to pay off your debt. This is why other industrial nations are ahead of the US.

Almost $100k student loans. Been on auto pay for years (30% of my pay on top of living expenses on a single income). Have barely chipped the dent due to most of it going to interest. Any relief would be welcome as it would greatly improve my quality of life. #CancelMyDebt

Most of the folks who tweeted in support of Senator’s Warren’s suggestion are in debt because they chose to go into debt. You don’t have to go to college. It’s not a law.

No one forced these kids to take out hundreds of thousands of dollars in student loans.

Hell, no one forced them to even go to college, which in many cases has become one of the biggest rackets in the country.

I’m not criticizing higher education, but I am criticizing this idea that every student should go to college, regardless of the cost.

Some kids would be better off learning a trade, or even taking a year off to figure out what they want to do with their lives, before dropping $50K for a year’s worth of core curriculum.

Of course, I really don’t care what these kids decide to do, as long as it doesn’t add to the many economic problems this country faces today.

And that’s exactly what student debt has become: A massive economic problem.

It’s actually a crisis that, make no mistake, will eventually trickle down to the rest of us.

Senator Warren and other far left politicians want everyone to have free college.

Well, why stop there?

We’ll just let the rich pay for it, right?

I can’t believe we’ve fallen so far. And when I watch some of these politicians suggest policies that are really based on little more than theft and wealth redistribution, I get very concerned.

What’s going to happen if these guys gain more congressional seats or even become president?

Look, I’m not trying to get into some big political debate. Instead, I’m simply doing my job: helping folks like you build and protect your wealth.

And make no mistake: If some of these ideas take hold and become law, your wealth will be at risk. Because it’s not the ultra-rich who will ultimately pay the price. It’ll be the regular folks, like you and me. It’s how it always works.

Now, if you’re a regular reader of these pages, you know I have a pretty impressive track record.

In fact, last year was my best year ever after I closed out three quadruple-digit gains.

Members of my Green Chip Stocks community who followed my advice made a fortune. Check it out:

And we’re still raking it in.

Mostly in the cannabis space, where I’m witnessing some of the biggest gains of my career.

In fact, I recently put together a list of all the cannabis stocks that have the most potential to repeat those quadruple-digit gains we saw last year. You can get access to that list here.

You can also click here to see where I’m personally investing my hard-earned money next.

Truth is, it’s getting dangerous out there. And as much as I hate to come off as a fear monger, the reality is that we need to build as much wealth as possible right now before the chickens come home to roost.

The movement to integrate more unsustainable economic policies that look more like something suggested by Fidel Castro or Joseph Stalin then by a U.S. lawmaker is very real. And I’m sure as hell not waiting around for the proverbial poop to hit the fan.

The time to supercharge your wealth-building strategies is now, not tomorrow.