In the desert about two hours north of Los Angeles, a business concern backed by West Coast tech billionaires has been secretly testing an experimental concentrated solar energy facility.

Now the company has revealed itself to the public, claiming a groundbreaking technological solar breakthrough it says can reduce carbon emissions at an industrial scale.

Up next, the company is already hinting at an IPO. 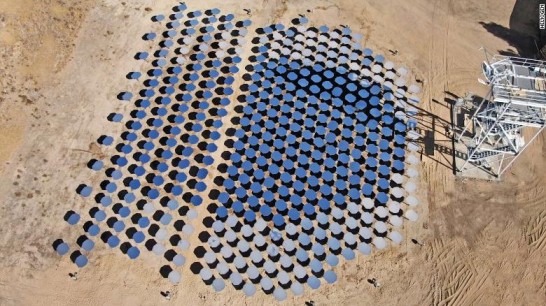 Heliogen, a private clean energy company headed by billionaire “Bond King” Bill Gross, has largely been operating in secret. Up until a few days ago, the company didn't even have an active website.

But covert operations ended Tuesday when the company issued a press release and was interviewed on CNN Business.

Gates was even quoted in Heliogen's press release, saying, “If we’re going to get to zero-carbon emissions overall, we have a lot of inventing to do. I’m pleased to have been an early backer of Bill Gross’s novel solar concentration technology.”

But more than the company's financial backers, Heliogen wanted to highlight crossing a major technological milestone at its concentrated solar energy facility in Lancaster, California.

The company says this breakthrough has the potential to replace the use of fossil fuels in the production of industrial materials such as cement steel and petrochemicals:

The potential impact of Heliogen’s patented technology is massive. With temperatures from its concentrating solar thermal technology exceeding 1,000 degrees Celsius, Heliogen will be able to replace the fuel that generates greenhouse gas emissions from industrial processes with solar energy for the first time. For instance, cement production – one of the industrial processes well suited to Heliogen’s technology – alone accounts for more than 7 percent of global CO2 emissions.

Most solar panels work by collecting the sun's energy and converting it into electricity. Heliogen’s technology is much different. Concentrated solar power uses mirrors to reflect the sun to a single point in order to create high temperatures.

Heliogen's Lancaster solar facility uses artificial intelligence in a system it calls HelioMax to direct the array of mirrors it uses to create heat, claiming better efficiency than any other comparable system.

“Basically, we're making a high-temperature solar oven. This is a solar oven that's operating at 1,000 degrees Celsius,” Gross explained to CNN. “At those temperatures we can do the serious industrial processes that release a lot of CO2, like cement making, steel making, glass making. All those industries, they don't use electricity, they use heat. And formerly, that wasn't possible from solar energy.”

Soon-Shiong also told CNN that after the large-scale application, Heliogen would likely be ready to go public.

Will Heliogen be the next clean energy unicorn?