Avoid Risk at all Costs

Here's today's theme: Talk is worthless to us.

Specifically, prediction talk is worthless to us as investors. Last week, another somebody went on some major financial news network and spewed what could essentially be filed as lies and conjectures.

Talk is easy, it comes naturally, and yet all too often, what is claimed to be true and then ends up false never hurts the speaker... just those who follow that speaker's advice.

On Thursday, John Kilduff, founder of Again Capital — an “investment advisory” company that invests in precious metals and energy derivatives — went on television and claimed that oil would hit the low $30-per-barrel range this year.

He said: “Christmas time we'll probably be rebounding off new lows off of the mid to low 30s.”

Kilduff made his claims on CNBC's early morning show Squawk Box, which has been dubbed by the network as the “ultimate 'pre-market' morning news and talk program, where the biggest names in business and politics tell their most important stories.”

It would seem that last Thursday morning, the program was more talk than news, as Kilduff was unable to provide any news other than that he was a person who runs a company that trades energy derivatives who thinks oil will go to $30 in December.

But maybe I'm being unfair. Maybe Kilduff is right that, come Christmastime, crude oil prices will go into the low 30s and people that bought oil stocks last year when it was at $100 per barrel will be SOL.

Investors who waited will have shut themselves off from gains on the recommendation of a professional derivatives trader who took no risk in making a wild claim.

So I'll suggest that you look at more stable evidence than the wild conjectures you find on CNBC.

My case was made for me this morning when it was reported that Saudi Arabia could raise its oil prices to Asia by as much as $1 per barrel in September.

Now, I realize that $1 per barrel isn't much, but when Saudi Arabia tampers with prices, the market tends to react differently, and prices swing wildly.

For example, last fall, when oil took some of its early losses, it was because Saudi Arabia and OPEC maintained production levels and cut prices to Asia by — you guessed it — $1.

And remember, this set off a bear market — a 20% drop from the year's highs.

So could this mean that when Saudi Arabia raises prices in September, oil will go up 20%?

Many will believe that, and there will probably be plenty of analysts who would say oil will go up in a big way once prices are raised.

However, I urge caution: The market is much different now than it was last October, and it's much easier for prices to fall than it is for them to rise. That takes confidence, which is much more expensive than doubt. 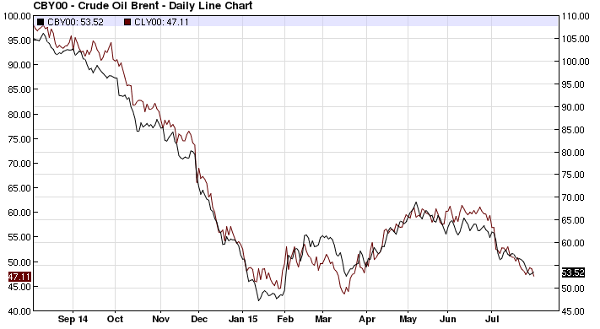 As you can see above, the prices of both Brent crude and West Texas Intermediate haven't reacted to the news of Saudi Arabia increasing prices with much enthusiasm.

In fact, oil was down at time of writing this morning.

On Friday, Baker Hughes announced that oil rigs in the U.S. increased by five to 664, once again bucking what had been this year's trend of lower rig counts.

As rig counts rise, so too do investor anxieties about more oil flooding the global market and depressing prices.

And even though the prospect of Saudi Arabia raising prices should offset these worries, the news out of Iran trumps everything...

On Sunday, Iran announced that it will be able to boost output by 500,000 barrels a day within a week of sanctions being lifted.

If that much more oil is added in such a brief amount of time, the effect on prices would be very, very negative.

If world powers approve the nuclear deal, then sanctions will be lifted sometime this November, according to the country's oil ministry. This would mean that in November, Iran would be able to seriously exacerbate the global supply glut.

The thing is, these claims are just claims and nothing more until they are confirmed by evidence and hard data. Just like Kilduff's prediction, there's no way to tell whether or not any of this is true until it happens, and at that point, it will be too late for investors.

Instead of blindly following the advice you see on CNBC or the claims made by Iran and other national oil companies, I suggest you minimize risk and trade commodities with care.

By using a dollar-cost averaging strategy, you can still make steady, decent returns even when the market loses value.

All it takes is time and a little discipline.