Psychedelics Stocks Set to Rebound in 2023

The AMA is Bullish on Psychedelics

That’s all it’ll take until the majority of states in the U.S. legalize psychedelics.

This, according to a new analysis published in the American Medical Association.

As reported in Marijuana Moment, the analysis showed that half of the states in the U.S. have considered a total of 74 psychedelics bills, including 69 legislative proposals and five ballot measures. Ten bills were enacted and 32 remain active, it showed. Researchers also noted that the majority of the reform measures “specified psilocybin,” with MDMA being the second most common substance referenced.

While I already knew about most of these bills, what I continue to find fascinating is how this issue is getting bipartisan support.

When we first saw the rise in cannabis legalization, it was primarily democrats that backed these measures, with many in the GOP being openly hostile towards it.

But when it comes to psychedelics, we’re actually seeing quite a few right-leaning republicans backing decriminalization and legalization measures.  These include, but are not limited to Texas Congressman Dan Crenshaw, Florida Congressman Matt Gaetz, and former Energy Secretary and Texas Governor Rick Perry.

As pointed out by the study’s authors, while early legislative efforts occurred in liberal states, the margin between liberal and conservative states has decreased over time, suggesting that psychedelic drug reform is becoming a bipartisan issue.

I’m still not exactly sure why psychedelics are starting to be embraced by both sides of the aisle, but what I do know is that while the market has not been kind to psychedelics stocks this year, the industry is quite healthy, with many of these companies reporting new, positive developments on a monthly, and sometimes weekly basis now. 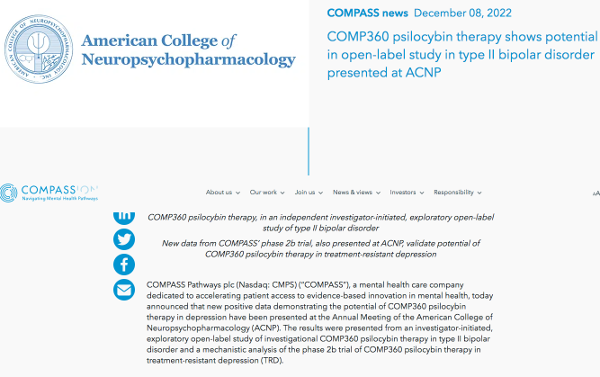 And Compass Pathways (NASDAQ: CMPS) isn’t the only game in the space.

Certainly some are doing better than others, but there are literally dozens of publicly-traded psychedelics stocks available for those looking to get some of this action.

These include, but are not limited to …

Of course, while the industry is moving along at a pretty rapid pace, many of these stocks do carry a fair amount of risk.  After all, most of these are essentially biotech plays, and those aren’t typically for the risk-averse.  That being said, risk can also deliver huge rewards.  It really all boils down to your own risk tolerance.

For me, I’m only willing to take big risks if the broader market is stable.  It is not, and that’s why I’m not a buyer of these stocks at these levels.  That being said, I do foresee some market stability coming in 2023.  That, plus some really nice bargains in the psychedelics space will make me a buyer.  I’m eager to jump back in, to be sure.

After all, I recommended buying shares of MindMed right after it went public.

That was definitely a nice ride! 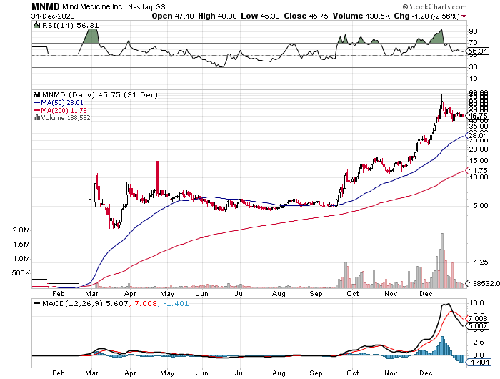 It should also be noted that some of these companies are expected to have positive clinical trial results, which would make them, or at least their IP, ripe for acquisition - and at very attractive premiums.

Make no mistake: Big Pharma will be a buyer, and Big Pharma has very deep pockets.

Even if you’re not a buyer at the moment, I would at least put some of these psychedelics stocks on your radar.  Because I have no doubt that a few of these are going to pay off handsomely.