Even during a Pandemic, the Cannabis Industry is Creating Jobs and Strengthening Local Economies. So why are Republicans so Eager to Criticize Democrats for Supporting it?

With all the smugness and vitriol they can muster up, certain members of the republican party are taking to Twitter to share their displeasure with the recently delivered stimulus bill.

Most notably, the fact that the word cannabis appears in it 68 times more than the word “jobs.”

It seems to be a shared sticking point, too, as this has been mentioned by a few GOP lawmakers.  As often is the case when it comes to cannabis.

It’s standard partisan buffoonery, though, as it leaves out the particulars.  Some of which should be things that, in theory, republicans should support.

For one, while the word cannabis appears 68 times more than the word jobs, the legalization of cannabis across various states has provided 243,700 full-time jobs, as of January.

The legal cannabis industry is actually the fastest-growing industry in the U.S.

As reported in Politico …

Weed businesses around the country that were in strong financial shape heading into the pandemic are hiring additional workers in response to robust demand for marijuana products. Almost all states have allowed pot shops to remain open, even though vast swaths of the retail economy have been shuttered for weeks.

And this is in defiance of federal prohibition, which is actually one of the most unjust laws the U.S. has ever had on the books.

The very basis of the prohibition of cannabis was constructed on the bedrock of racism and intolerance.  Started by a man named Harry J. Asnlinger who once said …

There are 100,000 total marijuana smokers in the US, and most are Negroes, Hispanics, Filipinos and entertainers. Their Satanic music, jazz and swing, result from marijuana usage. This marijuana causes white women to seek sexual relations with Negroes, entertainers and any others.​​

This is a quote from a man who started the prohibition on cannabis, which to this day, remains in place.

But what makes this sting even more is that we have elected officials who continue to push unfair stigmas against cannabis, and use this stigmas as political fodder.

Just look at these tweets … 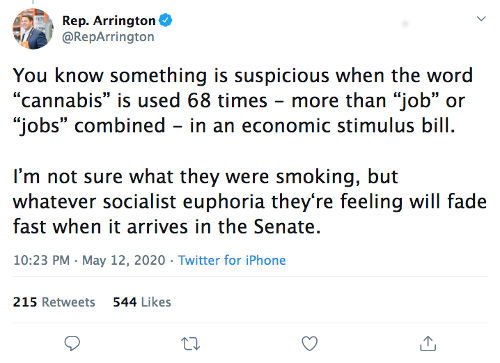 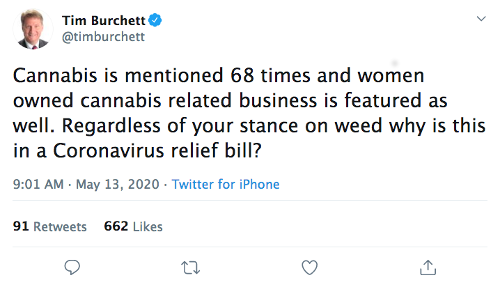 How is this helpful?

How does this help the tens of millions of Americans that are now out of work, and are desperate for a life line?

Here we are, at arguably one of the worst times in US history, and these guys want to trivialize something that could be one of many tools to get our economy growing again?

Not only is this unacceptable, but it’s irresponsible.

Understand, this isn’t about the bailout bill or whether or not its being crafted in a responsible way.  Based on that last one, we know it’s not.  But of all the nonsense thats in that bill, it is clear that focusing on cannabis is less about the nuts and bolts of a bad bill, and more about continuing an anti-cannabis narrative that harms our economy, harms our criminal justice system, and harms our veterans and other sick Americans who need this medicine,

There is no honor in what these lawmakers have done.

And for the sake of clarification, inclusions of cannabis-related language are in reference to Sec. 606 of the bill …

This section would allow cannabis-related legitimate businesses, that in many states have remained open during the COVID-19 pandemic as essential services, along with their service providers, to access banking services and products, as well as insurance.

Basically, it would allow cannabis businesses to have access to the same financial services as any other essential or non-essential business in operation today.

With approval, this would further strengthen the industry, and thereby bolster its ability to provide jobs and help grow the economy.

And here’s the best part …

It costs taxpayers nothing.

Why would any republican, or any lawmaker for that matter, be in opposition to this?

As a libertarian, I have no horse in the bipartisan race to the bottom.  So this is not an attempt to  simply shame republicans for such foolishness.  It is, rather, an effort to expose a long history of injustice that could be rectified, if just for a moment, we would not focus on what’s best for our political party, but what’s best for our great nation.