Food scarcity is emerging as one of the defining issues of a new era.

According to the UN, about 815 million people (roughly 10% of the global population) currently live undernourished.

By 2050, the global population is expected to reach almost 10 billion. And the planet's food supplies will be under far greater stress.

Water shortages, pollution, rising energy costs, urbanization, and geopolitical instability are just a few well-discussed issues in the conversation of feeding the future.

Phosphorus is essential to all living things. It's the backbone of DNA, playing a vital role in the way plants and animals convert energy into usable energy.

In plants, phosphorus makes photosynthesis possible. It works with other nutrients (including nitrogen and potassium) that are naturally found in soil that make plants grow.

But farmers often find that those nutrients are not plentiful enough to grow healthy plants or have been depleted by previous crops. That's when they turn to fertilizers.

Fertilizers add or replace soil nutrients like phosphorous. They're a critical component to agriculture and world food output.

But there's a big problem: The world is eventually going to face shortages of irreplaceable ingredients that go into modern fertilizers, most notably phosphate rock.

Phosphate rock is a sedimentary rock that contains high concentrations of phosphorus. And it's what is used to produce the modern fertilizers that feed the world.

It's not a stretch to say phosphate rock is among the most essential natural resources to humanity, rivaled in importance only by clean water and energy.

However, like all other natural resources, phosphate rock is finite. And nonstop extraction will eventually lead to complete depletion, which would be utterly devastating for humanity.

This led to numerous studies that concluded in warnings about a “peak phosphorus” that will occur sooner or later.

In 2009, one such study by researchers in Australia and Sweden projected global phosphate rock production would peak around the year 2033.

But other estimates of global phosphate rock depletion range from 30 years to 400 years. Here are the main features of the most notable studies: 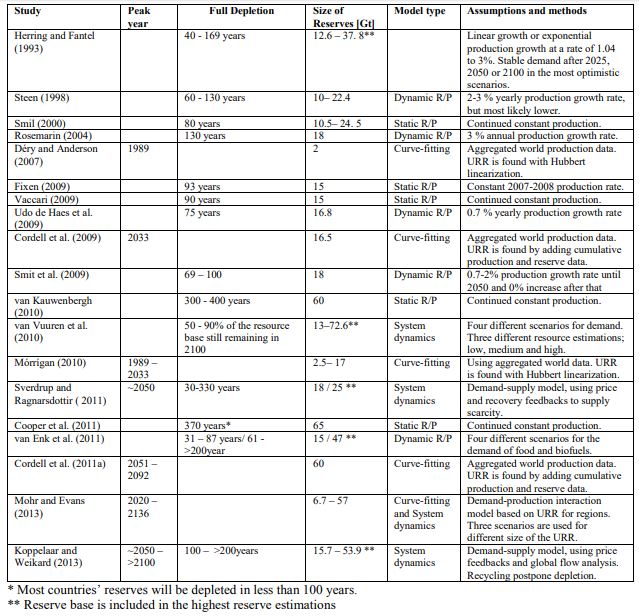 So even though phosphate rock is incredibly important, we're fine for the next century, right?

Well, there's one thing none of the models used can predict: geopolitical instability.

Unlike gold or precious metals, phosphorous isn't rare. In fact, it's the 11th most common element in the Earth's crust. The USGS estimates the Earth contains 300 Gigatonnes (Gt) of phosphate ore. But only a fraction of that is mineable.

Phosphorus-bearing ores are not commonly found in concentrations high enough to make economic extraction feasible. So there are only a few places in the world to find them.

But the lion's share of world's phosphate reserves is located in one single country: Morocco.

The North African nation is home to 70% of the world's phosphate reserves. That's good for Morocco. But it puts the rest of the world in a shaky position because such a concentration of reserves creates grounds for significant bottlenecks that could disrupt production and the world's supply of this critical resource. 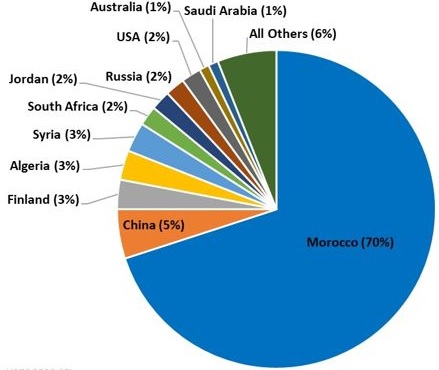 First there are probable diplomatic implications, particularly considering relationships between Western nations and the Arab world.

There already exists long-term conflict between these worlds, and continued future deterioration of diplomacy could easily lead to trade disputes or outright export bans.

But the other Western nations, which are at odds with the rest of the Arab world, are not so lucky. And diplomatic deterioration between Morocco and any nation (not just the U.S.) could lead to higher phosphate prices.

Although Morocco was not significantly affected by the Arab Spring, there have been recent strikes and protests over unemployment and wealth equality. So there are grounds for potential future internal instability.

On top of that is the Western Sahara conflict.

Depending on who you ask, Morocco is actually two countries. The Moroccan government has occupied the area known as Western Sahara since 1975. And it has been a disputed territory for just as long.

Today, Western Sahara is partially controlled by the self-proclaimed Sahrawi Arab Democratic Republic and partially by the Moroccan government.

As it turns out, Western Sahara is very rich in phosphate resources. Could you have guessed?

And there are already organizations drawing attention to what they call the “exploitation” of their resource. One such group, the Western Sahara Resource Watch, says:

The illegally exploited phosphate rock is an important source of income for the Moroccan government, which holds large parts of the Western Sahara territory under military occupation, contrary to international law. Representatives of the Saharawi people have been consistently outspoken against the trade, both in the UN, generally, and to specific companies.

The dispute between Sahrawi Arab Democratic Republic and the Moroccan government could balloon naturally and disrupt exports. Or the dispute could be incited by outside agents seeking greater control of the area's phosphate resources. Any number of things could set off instability in the area that would lead to supply disruptions. And that could cause a severe phosphate supply crunch in the future.

For now, Morocco remains only the second largest producer of phosphate rock, behind China. But with depleting supplies, the future will become more and more dependent on Moroccan phosphate resources.

And potential bottlenecks stemming from internal or external geopolitical instability with or within Morocco could lead to significant supply shortages in the future.

In conclusion, the world is not running out of phosphate. But the stage could be set for major supply disruptions in the future with Morocco's near-monopolistic grip of phosphate rock resources.