Pay No Attention to the Reality Behind the Curtain

Pay no attention to the reality behind the curtain.

West Texas Intermediate isn't about to ding the $100 bell...

The new oil we're finding isn't thicker or more sour or harder to drill for and successfully recover.

We aren't scouring the deepest depths of the ocean and the nooks and crannies of every geologic formation to find more, like a crackhead searching for his next hit.

The entire world isn't so worried about a disruption in oil supply that a fart from Libya or Israel or Iran — or is it Iraq, or Nigeria? — sends prices moving higher by dollars per day.

That's because Peak Oil isn't about when production of conventional oil will reach maximum production.

You can just point to oil in the ground and say there's plenty.

Don't worry; we can run cars and trucks and tractors on reserve numbers.

“Probable” and “proven” is good enough for our plastics and pills.

Yes, yes! Shale is a panacea.

And if the price of oil should ever fall, we'll still be able to get that oil because “technically recoverable” oil that can be “extracted economically” are fictional terms that don't matter.

If the cost of production exceeds the price of oil, companies will still want to get it.

The U.S. is once again on the road to oil independence.

The 5.7 million barrels per day we produce...

Is far greater than the 18.835 million barrels per day we consume.

No, the U.S. doesn't continue to rely nearly 60% on oil imports.

And exports haven't been falling in countries from which we get that oil — like, say, Saudi Arabia, Iran, Nigeria, the UAE, Norway, Venezuela, and Kuwait. 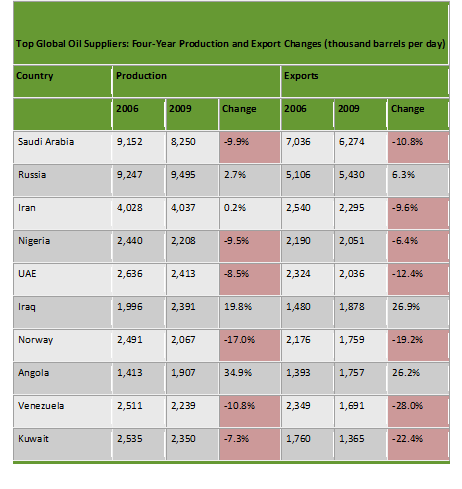 And no, rapidly growing domestic demand in those countries won't further eat into their export capacities.

Both the Energy Information Administration and the International Energy Agency aren't saying the world will need 90 million barrels per day next year.

And the world has always produced at least that much:

Oh, and oil, lease condensate, natural gas liquids, and all forms of natural gas are the same thing. They can all be used for the same things without a massive and extremely expensive years-long infrastructure changeover.

And when you include all those other liquids, the world certainly produces more than the 90 million barrels per day it will need next year:

You see, Peak Oil can't be real because the world is producing more than it consumes.

It can't be real because all these studies say there is plenty of oil in the ground.

It can't be real because we've changed the definition of Peak Oil to include unconventional sources like oil sands and bitumen and kerogen.

It can't be real because it doesn't suit the agenda of (enter news group, political party, industry association, or company here).