Since he was sworn in earlier this year, it seems like a lot of things are being done “despite Trump.”

One of the most common of these is investment in renewables, as if putting money into solar and wind stocks is worth it if only to spite our new president.

And now that we’ve officially been pulled out of the landmark Paris Agreement, that mindset is only going to get stronger. Never mind that President Trump admitted he’ll be negotiating a “more fair” climate deal — the zeitgeist is already fully in control.

Today, I’d like to put one of the most zeitgeist-fueled fears to rest.

Specifically the fear that Trump’s announcement marks the end of the U.S. renewables industry.

You’ll have to remember that the Paris Agreement was a controversial issue from the start, and yet few people even know what the deal entails!

So let’s review, and then I’ll explain why there was never a reason to panic in the first place.

The 21st Conference of the Parties, more commonly referred to as COP-21, took place in Paris, France, between November and December of 2015.

But on December 12th, the last day of the event, a landmark deal was struck: 195 countries from around the world agreed to participate in the global initiative to cut carbon emissions largely by implementing cleaner energy technologies.

In April of 2016, the deal was signed, and in November, it came into force.

Under this agreement, all participants would be held accountable for a certain amount of emissions reduction, with the goal of keeping rising temperatures around the world from increasing more than two degrees Celsius above pre-industrial levels.

At first glance, it sounds like the perfect way to clean up the whole world at once!

But if you think about it a little more, it’s much trickier than that…

First off, the whole goal of the Agreement was never going to be enough. Two degrees Celsius is still expected to have massive, if not outright devastating, effects on the climate (that is, if you believe it’s happening at all).

Second, the goals set by each country were never going to be enough to cap the warming at two degrees Celsius, making all the potential improvements useless on two fronts.

And finally, there was no way to enforce any of this.

Short of the implication of, “I’m doing my part, why aren’t you doing yours?” there were no real ramifications for a country not reaching its individual goal.

And it was this kind of misstep that put Trump off the deal in the first place.

Trump is NOT Against Renewables

Let’s get that out there right now: Trump is not out to kill the renewable market. In fact, many of the advisors he hand-chose to help him lead the country, as Jeff Siegel has pointed out, are renewable energy investors themselves!

True, Trump himself is oddly adamantly for coal power (don’t get your hopes up for that “clean coal” mine — that’s not a thing), but once you take a look at where he’s coming from, you’ll understand why.

More than anything, Trump is always gunning for “America first.”

Remember, Trump is a businessman. In his eyes, the rules and regulations as they were written offered opportunities for both the U.S. and every other participant to cut corners in the name of saving money — a noble enough cause, but often a major hurdle for growing industries.

Will the process of clean energy growth slow without legal ramifications? Definitely.

But will it stop completely? Absolutely not! 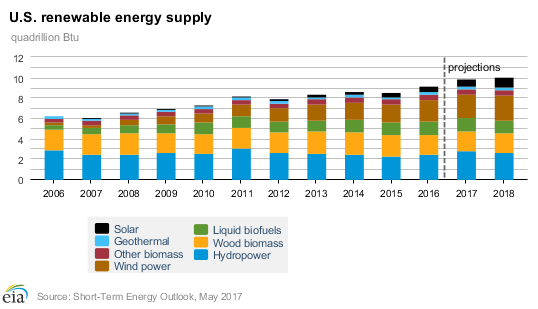 Solar has grown so much that it now employs more people than both coal and natural gas in the U.S., according to the Department of Energy. Even opponents of the Paris Agreement admit that without it, this job growth will slow but not stop. Wind has proven to be an even bigger asset, as offshore wind farms offer more space for companies to expand.

All of this was happening long before talks in Paris had anything to do with it. The U.S. will, without a doubt, continue to make progress without the Agreement in place.

Plus, I think it’s clear by now that Trump is opposed to foreign businesses moving in on American territory… but he’s got no problem selling American products overseas.

So here’s the bit I know energy investors will be glad to hear: Even though the U.S. is out of the plan, global initiatives will continue pushing both solar and wind (and energy storage along with them) to new highs.