Only 20 Years of Gold Reserves Left on Planet Earth

In 2016, an archaeological dig in Bulgaria uncovered this small gold bead... 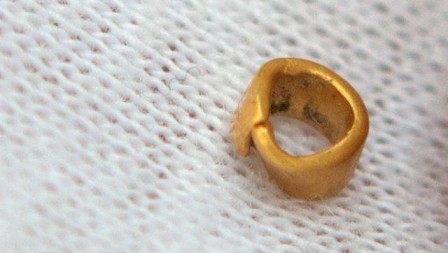 It's just 4 milliliters in diameter and weighs only 0.15 grams, giving the bead's a gold content value of less than $8 today. But to archaeologists, this tiny trinket is priceless. That's because it's the world's oldest known gold artifact.

Archaeologists found this gold bead at a prehistoric human settlement in southern Bulgaria, that dates back to 4600 B.C. That's some 200 years older than gold jewelry previously found in Bulgaria. Yavor Boyadzhiev, associate professor at the Bulgarian Academy of Sciences, was quoted in a 2016 Reuters article saying of the find, “It’s a really important discovery. It is a tiny piece of gold but big enough to find its place in history.”

But this discovery also brings up an interesting question for gold investors: Gold is a finite resource, and mining gold for over 6,500 years, won't the Earth's resources become exhausted, eventually?

At least for all intents and purposes.

The World Gold Council (WGC) estimates that throughout all of human history we have mined about 198,000 metric tons of gold. That's around 6.4 billion troy ounces, and because gold is so valuable (and indestructible), most of the gold ever mined is still being used in one form or another. Whether it's in jewelry or a bullion bar, some of the gold on the market today has been in circulation for thousands of years. The gold ring on your finger could have once been part of King Solomon's hoard.

Despite thousands of years of use and mining, however, most of this gold was actually mined in the just past few decades. According to the WGC, about 66% of all the gold ever mined has been produced since 1950.

So despite gold's mining thousands-year history, it's really not until the modern era that we were able to produce the yellow metal so efficiently. Nevertheless, we've been able to ramp up gold production over the past century on such a massive scale now that running out of gold resources (at least easily accessible resources) really is something to consider.

How much gold is left in the Earth?

A lot, actually. But there's a catch.

Geologist Bernard Wood of Macquarie University in Australia believes there could be as much as 1.6 quadrillion tons of untapped gold, all concentrated in one area. That's enough gold to cover the Earth's surface in 1.5 feet of the yellow metal. But here's that catch...

All that gold is located in the center of the Earth at its core and will probably never be recovered. Geologists estimate that over 99% of all the Earth's gold is simply too expensive or impossible to reach with current technologies.

So the Earth won't be completely tapped out of gold ever. But the gold we can easily and affordably get to might tap out soon.

Of the world's minable gold, the World Gold Council estimates there are roughly 54,000 metric tons of gold in sufficient concentrations and depths that can be recovered at a reasonable cost. That's over 1.7 billion troy ounces. But that won't last long.

The WGC says global mining adds between 2,500 to 3,000 metric tons of gold to the overall above-ground stock of gold. That means the world's recoverable gold reserves could be exhausted in about 20 years.

Then there are new technologies and modernized processes. New technologies could lead to an increase in gold discoveries, and optimized processes can make previously unreachable natural resources accessible. Consider how fracking revolutionized the global oil landscape or how heap leaching changed the game for gold mining in the 1950s and 1960s.

Point is there's no telling what will come down the pipeline for gold mining. So I'm not exactly convinced the world will run out of minable gold any time soon. But we've most likely never been so close. And that's something to consider.