Oil Stocks Are About to Launch

Here at Energy and Capital, I belong to the church of what makes you money. Oftentimes that is cutting-edge technology, but sometimes the setup in cyclicals is too good to pass up.

Right now we are getting just such a setup in midtier oil companies. 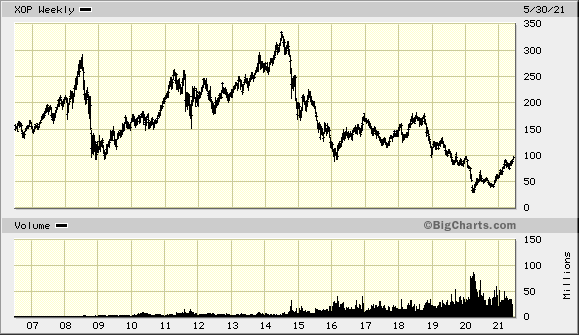 As you can see, XOP has doubled over the last year but is still well off its 2014 highs. Note the volume spike in March 2020. That’s called a capitulation low. It has been followed by higher highs and higher lows, which is the definition of a bull market.

A capitulation low is when long-term die-hard investors throw in the towel en masse. It is a classic turnaround signal, and this time it coincided with the price of oil going negative.

Of course, this type of price action is always followed by a “this time it's different" (TTID) narrative. Today’s “TTID” goes something like: Electric cars will replace the gas-powered engine and we won’t need oil anymore.

The fact that the doomsayers type this while using a keyboard and mouse made from petroleum never enters their mind, nor the fact that there simply isn’t enough electrical power generation to end oil, etc., etc.

It’s a basic energy cycle, and it has been going on since they were harvesting whales in Nantucket.

Brent crude is selling for $71 per barrel today. Many expect it to go toward $90 as the economy reopens, supply chains get back to normal, and drivers get back on the road.

And yet demand is rising. Here in Maryland, the price of gasoline is already over $3. The line at the Costco pumps was eight-deep on Sunday. People are willing to wait half an hour to save $4. I’m not sure if I’m impatient or have too much money, but that seems insane to me.

Energy giant BP PLC sees a strong recovery in global crude demand and expects it to last for some time, with U.S. shale production being kept in check, according to Chief Executive Officer Bernard Looney.

"There is a lot of evidence that suggests that demand will be strong, and the shale seems to be remaining disciplined,” Looney told Bloomberg News in St. Petersburg, Russia. “I think that the situation we’re in at the moment could last like this for a while.”

The bottom line is that many oil companies are selling at 60%–80% discounts from their highs at a time when oil prices are about to take off.

Now is the time to put your money to work in oil. I will give my best oil pick in this month's Bull and Bust Report.