Oil has some great momentum behind it right now.

The price of WTI crude topped $60 on Friday, ending its best first quarter in a decade. 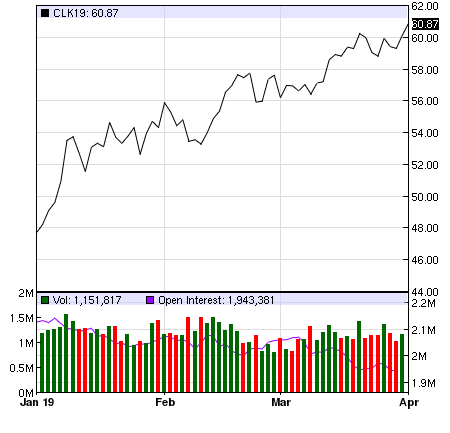 Well, while oil does seem to have some muscle behind it (and I do think prices are headed a bit higher), I think we should reign in our expectations.

These headlines, as well as a rally in the global equity market and positive Fed comments, helped push oil prices higher last week.

But the big news last week was larger than expected cuts to Russian oil production.

New data from Russia's Energy Ministry showed crude production was down 153,000 bpd to 11.265 million bpd. Analysts had expected a smaller decline of 97,000 bpd.

Back in December, OPEC+ agreed to cut production by 1.2 million bpd during the first six months of this year (800,000 bpd for OPEC members).

So these cuts were no surprise to the market. Instead, it seems the real surprise was that Russia actually made the cuts (or at least reported it did).

See, OPEC and other oil-producing nations don't have a great history of keeping their word on oil production. They often say one thing and just turn around and do the other.

If crude prices end up getting closer to $80 per barrel in the near term, countries like Russia are certainly going to reconsider those production cuts, despite whatever agreement they might have.

At $100 per barrel, they'll have the taps wide open. And all that new supply would push prices down again.

It's also important to consider that OPEC crude production is already at a four-year low. Members are not going to want to cut a lot more production. In fact, they're probably aching to produce more.

On top of all this, U.S. crude oil production remains at records high of 12.1 million bpd.

So while I think the price of oil could see a little more movement higher ahead of the "summer driving season," I really don't think we're going to see record prices anytime soon.

The end of 2018 wasn't kind to oil prices. There was a sharp decline after a good summer run that pushed oil all the way back below $50/bbl.

The bottom of that pullback nearly coincided with the end of the year: 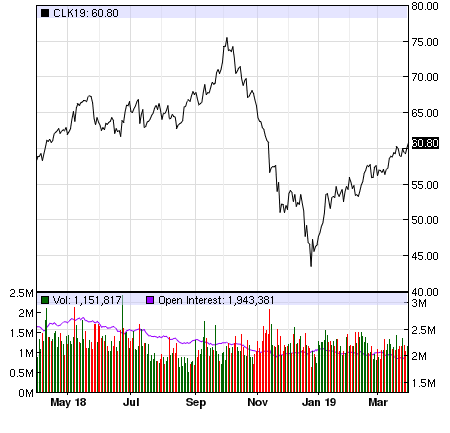 So while the price of oil really has experienced its best first quarter in almost a decade, the timing of that drop from $75 to $45 per barrel is something to consider.

Oil's momentum looks great. But I don't expect to see oil higher than $80 per barrel anytime in the very near future.

The World’s Most Expensive Metal
Energy and Capital editor Luke Burgess explores the most expensive metals, and substances in general, on Earth. Which ones, if any, do you really want to own?
America Is the Global Energy King
The U.S. is now exporting more oil than 12 OPEC nations produce, something that was thought impossible only a few years ago. Energy and Capital editor Keith Kohl explains how we got here...
The Second Phase of Our Oil Boom Will Make You Even Richer
Energy and Capital editor Keith Kohl breaks down one group of investments that is going to mint a fortune for readers as oil production in the Permian Basin breaks new records.
Hydrogen Fuel Cells: The Downfall of Tesla?
Lithium has been the front-runner in the battery technology market for years, but that is all coming to an end. Elon Musk is against them, but Jeff Bezos is investing heavily in them. Hydrogen Fuel Cells will turn the battery market upside down and we've discovered the tiny company that is going to make it happen.