The first half of the year was very exciting for oil investors. But what can we expect for the rest of 2018?

There was a lot of hope surrounding commodities going into the year. But prices largely fell short of expectations during 1H 2018. That was despite increasing U.S. inflation, rising global debt levels, and growing geopolitical tensions.

Crude oil, however, was an exception. Of the 14 commodities tracked by U.S. Global Investors, only three saw gains in the first half, led by oil. 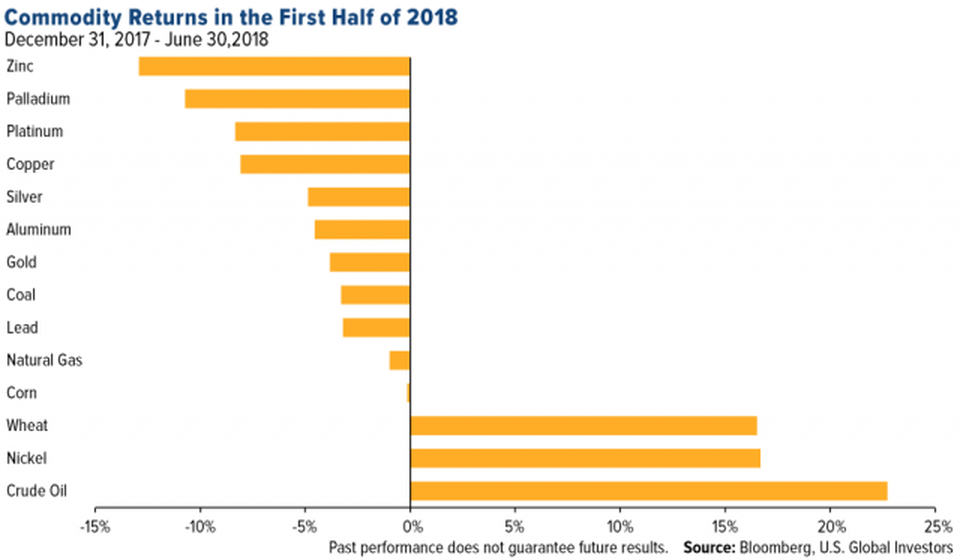 Stimulated by an OPEC agreement to cut global crude supplies, oil prices have steadily been on the rise since 2016, when they bottomed around $30 per barrel.

In the first half of this year, the price of oil was energized by falling inventories, unplanned supply outages, and Washington's threats of sanctions against countries importing Iranian crude.

Back in May, an IEA report showed world oil inventories were at a three-year low. A few weeks prior, the U.S. Energy Information Administration published a report describing American crude stocks also at their lowest levels since 2015. All this helped push the price of crude to nearly $80 per barrel. You probably remember gasoline prices shooting up quickly in the spring. This was a large part of it.

Oil inventories here in the U.S. and abroad have since increased from these lows. And crude prices have subsided, along with gasoline prices a bit. At last look, NYMEX crude oil spot is trading at $66.86 per barrel. But more unexpected supply cuts could again dig into crude stocks and bolster prices for the remainder of the year.

Several weeks ago, an unexpected power outage in Canada removed about 350,000 barrels per day from a large oil sands site. Meanwhile, conflict in Libya led to disruptions at crude oil export and storage facilities.

But the big unplanned outage story during the first half of 2018 was Venezuela.

Chronic mismanagement and underinvestment has led to a decline in Venezuela’s crude oil production over the past few years. But now, as the socialist country spirals into economic and political abyss, oil production has fallen off a cliff. According to the latest data, oil production in Venezuela now stands at its lowest level in more than 50 years.

Global unplanned oil supply outages totaled 2 million bbl/d in June. This is the highest level since May 2017. And as political hostilities increase all over the world, we might expect more unplanned outages.

Of all the factors supporting oil prices right now, geopolitical contention may have the most immediate and noticeable effect.

When Trump pulled out of the Iran nuclear deal back in May, he told nations trading with Iran that they would have to stop in 90 days or face U.S. sanctions. That 90-day window is now coming to a close, and the rest of 2018 will see the drama unfold.

China is the world's largest importer of Iranian oil. But the country is already embroiled in a trade war with Washington. So it's likely China will continue to buy oil from Iran despite sanction threats.

Still, we can expect to see Washington increase pressure on other Iranian oil importers over the next several weeks, which could crank up supply fears again. Iran is one of the world's largest oil suppliers, accounting for about 3.8 million barrels of oil production per day. A total supply disruption would send oil prices screaming higher.

Increasing inflation may also play a part in rising oil prices for the rest of the year. After years of low inflation, the Fed reached its target of 2% inflation in the very beginning of 2018. Some economists now believe the bank could tolerate annual core PCE inflation tipping up to 2.5%.

Sanction threats from Trump's nuclear deal with Iran will most likely have the most immediate effect on oil prices. But higher inflation could mean higher prices for commodities across the board over the longer term.

All in all, the rest of the year looks great for oil investors. And now that the price of crude has dipped below $70 per barrel, it's a great time to buy.

Oil is dying. But it's not dead. Despite the rise of electric vehicles, the global oil demand is expected to continue increasing through the next decade for sure.

There is still time to make plenty of money. Stay long oil for now.

Our founder, Brian Hicks, swore he would never touch a pot stock. Never!

That was until he was shown a little-known way to collect regular dividend checks from a pot company so safe and consistent that he immediately bought 12,000 shares.

It’s the only pot stock of its kind, with virtually no competition. With a 100% market share, it's no wonder this pot stock company is up 89% in the last six months.

But that doesn’t even begin to tell the full story...

Find out why he is raving about this particular stock... even calling it “the only pot stock I’ll ever own.” Click here.