OPEC ministers tentatively agreed to a deal to join other big producers in adding around 600,000 barrels a day of oil to global markets, according to people familiar with the matter.

The agreement is in principle only and involves so-called effective barrels—or “real” barrels that will actually hit markets, these people said.

The market was expecting 1 million to 1.5 million barrels in new OPEC oil. And that begs the question of how much spare capacity Saudi Arabia actually has.

The chief executive of Saudi state oil giant Saudi Aramco said on Monday that Saudi Arabia has a spare oil production capacity of 2 million bpd and is able to meet additional demand in case of disruption of oil supplies.

This could be the case, but it’s been over a decade since they’ve had to prove it.

The numbers I’ve read say the production reduction in Libya and Venezuela has resulted in an 800,000 barrel-per-day (bpd) cut this year, with an additional 500,000 bpd drop from Venezuela coming in the second half.

Venezuela is in the chaotic throes of late-stage socialism. Libyan ports and production are in a war zone, and Iran sanctions are kicking in.

Goldman Sachs is bullish, putting out a note last week that said, “The oil market remains in deficit with resilient demand growth and rising disruptions requiring higher core OPEC and Russia production to avoid a stock-out by year-end.”

Global demand will push oil above $80 for WTI over the second half of this year. The world is still undersupplied, which is good for oil longs.

In other news, Saudi Arabia continues to move toward global norms. Females are now legally able to drive cars in the Kingdom.

And get this: The Israeli minister of transportation recently green-lighted a railroad from Israel to Saudi Arabia — the “Hejaz railway” from Haifa to Medina. This would have been unthinkable just last year. The new alliance between Israel and Saudi Arabia gets no press coverage but is the biggest change in the Middle East since the Israeli/Egypt peace deal.

And last week, MSCI said it would reclassify Saudi Arabia as an emerging market. This is a big move that will bring billions of new investment to the country.

The MSCI index is a benchmark for global stock funds. Saudi Arabia has 185 stocks and will become the third-largest MSCI country from Europe, Africa, or the Middle East, behind only South Africa and Russia.

The Kingdom is also the Arab world’s largest stock market, with a capitalization of about $500 billion and a P/E ratio of 16.57. 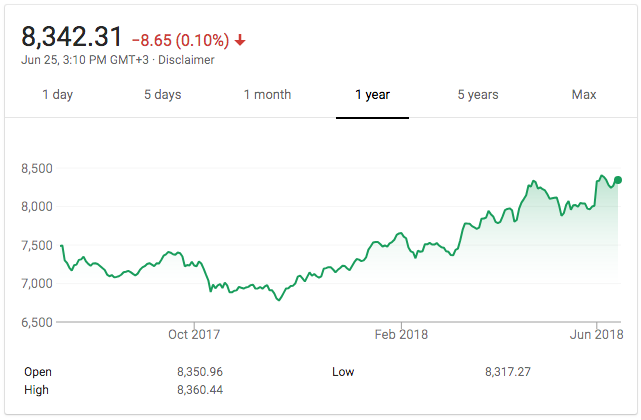 Lastly, I’d like to point out that Turkey’s new president is the same as the old one: Erdogan. The thuggish President Recep Tayyip Erdogan blatantly falsified yesterday's election and will continue to turn our NATO ally into a pro-Russian dictatorship.

The Turkish ETF shows how the market feels about it: 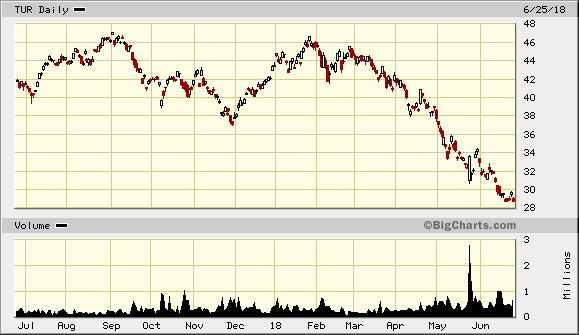 I’m old enough to remember when Turkey was the best-performing emerging market. From 2009 to 2011, the ETF went from $20 to $80. There was talk of Turkey joining the EU.

Now it looks like by the time it gets its act together, the EU will have disintegrated.

So here is a shout-out to all those Turkish journalist, teachers, and freedom-loving people now in jail for attempting to get the truth out there and stem the tide of tyranny.

Black Swans and 1,000-Year Floods
A black swan is a metaphor that describes a surprise event with a large impact that is rationalized in hindsight. The government is going to get hit with the 1,000-year flood. Energy and Capital editor Christian DeHaemer explains how you can protect yourself...
Trump’s Suggestion for Condos in North Korea is actually a Great Idea
Trump’s comments about condos in North Korea actually make a lot of sense.
In Defense of Capitalism
Capitalism is not an institution of repression. In fact, it's just the opposite. Capitalism allows upward mobility for private individuals. Without it, we all live under nearly complete government economic control. Energy and Capital editor Luke Burgess states his case in support of capitalism...
Hydrogen Fuel Cells: The Downfall of Tesla?
Lithium has been the front-runner in the battery technology market for years, but that is all coming to an end. Elon Musk is against them, but Jeff Bezos is investing heavily in them. Hydrogen Fuel Cells will turn the battery market upside down and we've discovered the tiny company that is going to make it happen.