Oil “God” Is Bullish on Crude

The former Citigroup manager, who made $100 million trading oil during the financial crisis (which earned him the nickname “God” of the crude market), says the energy markets face many headwinds, but investors are better off betting on oil.

Hall says the biggest concern for oil investors is a global recession, which could significantly impact demand. But he's not expecting a worldwide slowdown. In an interview with Bloomberg, Hall said:

With prices hovering at a little over $50 a barrel, I think you have to have a pretty negative outlook on the global economy to believe the prices will continue their downward trajectory. I don't think we're on the verge of a global recession or anything like that.

Of course, Andrew Hall is no prophet of energy or any markets. In 2017, Hall shut down the main hedge fund he was running with a 30% loss. So I'm not afraid to disagree with “God” on this one.

I believe, like many others, that a significant global slowdown does, in fact, threaten markets in the near term.

But I don't think this slowdown will affect oil prices to the downside — or at least not as much as expected.

A lot of people are automatically comparing this global recession everyone is talking about and its potential effects on the oil market to the financial crisis of 2008. But that's a mistake.

But what people don't consider is all the speculation and hype in the oil markets just prior to the bigger crash.

This was a time when everyone was talking about peak oil, crude's finite limitations, and what that was going to mean for future generations. Fears of running out of oil helped fuel the growth of battery electric vehicles.

Everyone wanted to believe oil prices were heading higher for different reasons. All this hype added significantly to oil prices, creating what some might even call a bubble. Have a look for yourself: 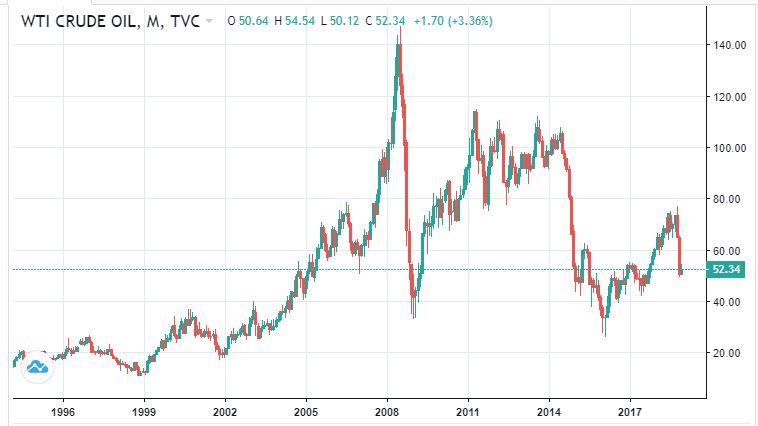 The price of oil actually began steadily rising way back at the turn of the millennium. And by 2006, oil prices were at their highest levels ever.

So while it's true that oil prices did collapse amid the financial crisis of 2008 and that the slowdown did affect demand, we should also consider that going into the pullback, the oil market was experiencing a bull market like never before.

Right now, there is little to no hype or speculation significantly adding to oil prices. And that leaves a lot less room for crude prices to drop much further.

In short, we believe a global recession is, in fact, forthcoming. And while this pullback could affect crude, there's little to no chance it will have as much of an impact on oil prices to the downside as was experienced in 2008.

A comparative 80% drop in prices would put oil around $10 per barrel. And that's very unlikely to happen.

This company just struck a three-year, $54 million deal. It recently saw a 14,000% increase in trade activity. It’s about to launch its own line of cannabis-infused soda.

And it’s still trading for less than a dollar.

This company is primed for explosive profits, and you could secure massive gains with even the smallest investment.

If you want to secure shares in the company that will become the Coca-Cola of the cannabis market...

Investing in the End of the Opioid Epidemic
Capitalism, not the government, will solve the opioid epidemic. Jeff Siegel looks at the latest government attempt to find a scapegoat and the companies that will really be pivotal in ending this epidemic... and making you money in the process.
Beginning of the End
Many people blame the Fed for hiking rates and slowing the economy. But the blame lies not on the current chief, Powell, but rather on Bernanke and his dripping madness into the dark world of money printing. This is the beginning of the end.
Medical Marijuana Millions
Less than a month after bringing legal cannabis to the people, Canada ran out of the new cash crop. Last year, I was having trouble convincing folks that the global cannabis market could bring in $46 billion, but Canada's alone is now projected to be $75 billion. It's time to pay attention...
Hydrogen Fuel Cells: The Downfall of Tesla?
Lithium has been the front-runner in the battery technology market for years, but that is all coming to an end. Elon Musk is against them, but Jeff Bezos is investing heavily in them. Hydrogen Fuel Cells will turn the battery market upside down and we've discovered the tiny company that is going to make it happen.