According to Conca, the American Petroleum Institute has flooded the airwaves in Ohio and Pennsylvania with anti-nuke commercials and has even “drawn AARP into the fray by pushing fear – fear of higher prices and fear of radiation. Just the opposite of what is true.”

While I don’t doubt that the oil industry would use its marketing muscle to convince folks that natural gas is better than nuclear, to deny that there is relevance to fear of higher prices and radiation is absurd.

On the cost side, Conca partly blames renewable energy subsidies, which, by the way, haven’t been around nearly as long as subsides for nuclear, and of course solar and wind will likely be free of many of those subsidies within the next ten years.

Joe Romm, that liberal energy analyst that provokes the status quo with his annoying facts and sound data analysis wrote about this very thing back in 2008, and made some very valid points that I’m sure Conca would refute just on principle. Check it out …

The Price-Anderson Nuclear Industries Indemnity Act caps the liability for claims arising from nuclear incidents. It reduces the insurance nuclear power plants need to buy and requires taxpayers to cover all claims in excess of the cap. The benefit of this indirect subsidy has been estimated at between $237 million and $3.5 billion a year, which suggests that it has been worth many billions of dollars to the industry. It could be argued that the value is considerably larger than that, since the industry might not have existed at all without it: “At the time of the Act’s passing, it was considered necessary as an incentive for the private production of nuclear power … because investors were unwilling to accept the then-unquantified risks of nuclear energy without some limitation on their liability.

One can make a case that such insurance was reasonable for a new, almost completely unknown technology in 1957. Extending it through 2025 is harder to justify. If investors aren’t willing to accept the risks of nuclear energy now, without taxpayers liable for any major catastrophe, perhaps the technology no longer deserves government support.

Conca also claims that the fear of radiation is not true. I’m not sure if he means the fear isn’t true or the potential of radiation isn’t true. Either way, both are quite accurate arguments from the oil and gas industry. Just ask the parents of this kid … 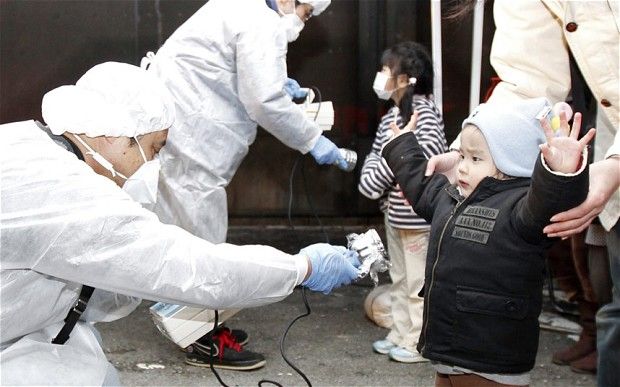 Understand, I’m not saying that nuclear power is unsafe.

I don't distrust nuclear physics. I just don't really trust people so much — especially those who tend to make the types of decisions that affect public safety. This is probably why I'm so critical of government efforts to “protect” us.

Either way, with the integration of solar, wind, geothermal, energy intelligence technology, and storage, the need for nuclear to supply “clean” baseload power is becoming less and less relevant. This is based on cost, NIMBY issues, and just better technology.

Of course, I don’t expect my opinion on this to sway nuclear power advocates. Those folks will go down with the ship, screaming from the top of their lungs that nuclear is clean, safe, and cheap. But it’ll never be as clean, safe, or cheap as where we’ll see renewable energy in another ten years. That’s a fact. And that’s without subsidies.

I get that nuclear power has provided us with reliable power for a very long time. But so did wood at one time. So did whale oil. With the advent of new technologies, old technologies die off. And when those older technologies reach the end of their usefulness, they should be phased out, not propped up.

The future of energy is renewable. It’s solar, wind, geothermal. It’s new storage technologies, conservation and efficiency measures, and energy intelligence technologies. It is all those things that are quickly becoming cleaner, cheaper, and safer than nuclear.

It’s time for those old nuclear plants to continue operating for now, and then be responsibly retired when they reach the end of their life cycles – just as they were intended to.