That's what $8.3 billion in loan guarantees announced this week will ensure. The money will help Southern Co. (NYSE: SO) build two reactors at its Vogtle plant in Georgia, near the South Carolina border.

Of course, I've been hammering home the idea of a nuclear revival since we sang Auld Lang Syne nearly two months ago. With growing regulations on the coal industry and the underdevelopment of renewable resources, nuclear is becoming the de facto option for clean baseload power.

The $8.3 billion commitment was enough to send the entire sector higher all week, with everyone from Cameco (NYSE: CCJ) to Shaw Group (NYSE: SHAW) turning in 5% to 10% two-day runs.

But this is only the beginning...

The United States gets about 20% of its electricity from 104 nuclear reactors. So each one is producing about 0.2% of our needs.

By contrast, we get 49% of our electricity from 614 coal plants — each one generating about 0.08% of our total supply.

Easy math tells us then that nuclear plants produce twice as much power as coal plants. And with the Securities & Exchange Commission (SEC) now requiring companies to disclose their carbon risk (yes, this is a reality), the Environmental Protection Agency declaring carbon dioxide a threat to public health, and an all out ban on new coal plants in California and elsewhere... next-generation nuclear plants are becoming more and more of a no-brainer.

And so is investing in it.

Per the Obama budget, $54.5 billion has been requested for nuclear loan guarantees. According the Department of Energy (DoE), that's enough to get construction of ten new reactors underway.

And that's just in the United States...

China is currently building eight reactors and has twenty in the planning stages.

And the United Arab Emirates just awarded a $40 billion deal to a Korean-led consortium to build four reactors and operate them for 60 years.

It's turning into a modern-day gold rush. And just as the merchants of picks and shovels made more money than miners in the late 1800s, so too will suppliers of necessary nuclear materials earn more than plant builders and operators.

That's the reason uranium stock indices are already outperforming other players in the nuclear game. Just check out the response to this week's news: 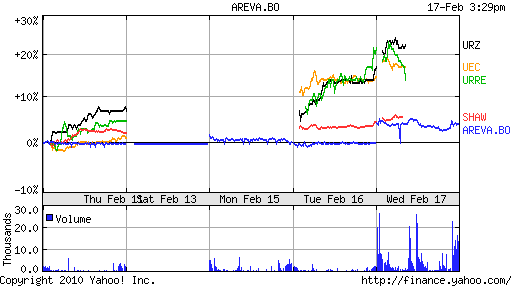 It's not hard to see which side of the industry investors prefer. Nuclear fuel is where all the action is — and will continue to be.

Getting in now will ensure handsome returns as the countries around the world increasingly turn to nuclear power.

We'll have plenty of guidance on this issue as the renaissance continues, but there is one stock you can buy right now to ensure triple-digit returns from the nuclear fuel sector.

It's not a uranium company, but instead makes a fuel additive that allows 25% more energy to be extracted from existing nuclear fuel. Even better, it absorbs much more heat, preventing meltdowns from happening ever again.

And that's the beauty of this play: It doesn't matter which company is supplying the fuel, they'll all be forced to buy this additive for the billions in cost savings and added safety it offers to plant operators.

I've prepared a full report on the company that. But if you want to get in at a good price, you have to act fast... it's ticking higher with every new nuclear announcement.