North Dakota Does It AGAIN

The Bakken Chart You Have to See to Believe

North Dakota did it again.

It demolished previous records in oil production for December 2012.

The latest numbers released last Friday by the state’s Department of Mineral Resources showed the state produced 768,800 barrels of oil a day for December.

Take a look at the chart provided by Dr. Mark Perry of the Carpe Diem blog: 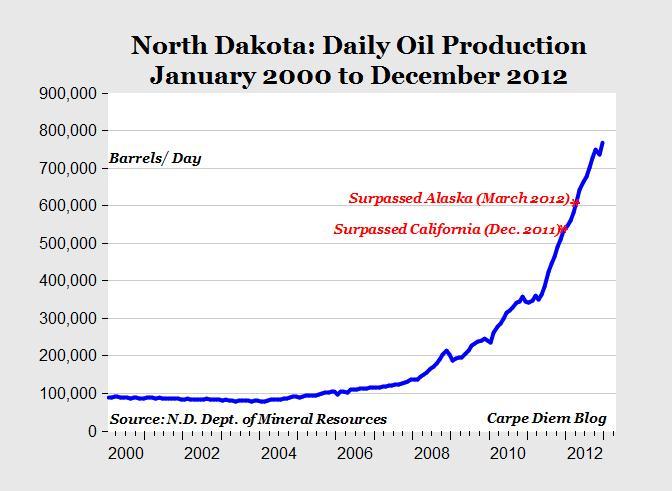 If this chart were of a stock, I'd be shorting the hell out of it, because it has essentially gone hyperbolic.

And right now, there no signs that oil production in the Bakken is going to slow down any time soon.

In total, the Industrial Commission estimates 6.5 billion barrels of recoverable oil are available in the Bakken and Three Forks formations. Only 244 million barrels have been recovered so far.

How long can the boom continue?

If my math is correct, at current production levels and the reserve estimate cited above, the Bakken boom can last at least another 25 years. And that's assuming reserve estimates don't go up.

But recall my previous articles in which I've talked extensively about reserve estimates for the Bakken swinging wildly over the last fifty years, from 4 billion barrels to over 500 billion barrels. This should give you a better idea (click to enlarge): 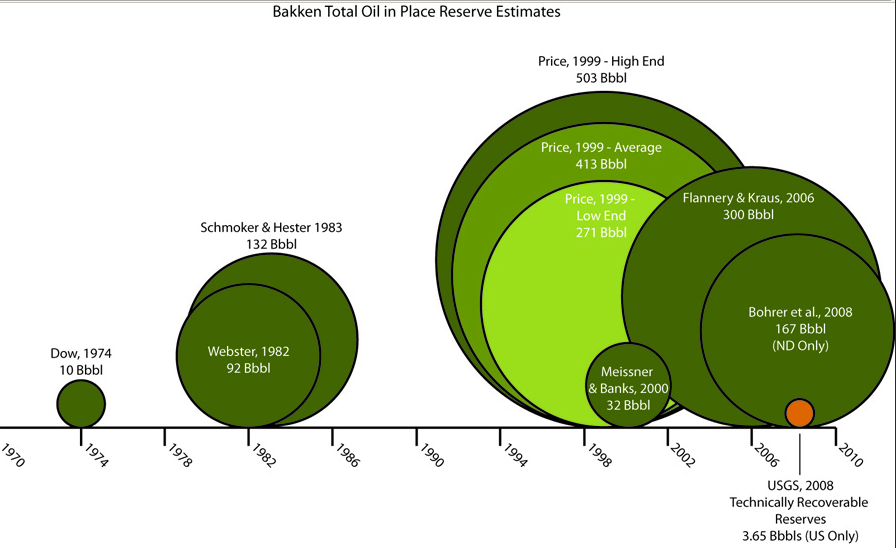 The technology to retrieve the oil in these shale formations is accelerating so fast, I wouldn't be surprised if reserve estimates continue to go higher and higher. And that goes for all of the shale formations in the United States...

What was once considered oil that was "too hard and too expensive" to no longer.

The entire United States is opened for drilling. (Well, most of it.)

North Dakota is second only to Texas in the United States for oil production. According to news reports:

He said it's now possible to estimate that 90 new wells have to go on line every month to maintain production levels. That many to keep the production number from slipping backward is due to an initial burst of oil that declines after days or weeks.

Helms said the rig count is stable, though it has slipped slightly this winter, down Friday to 182 rigs, off from 186 in November and the all-time high of 218 rigs last May.

There are more than 400 wells that have been drilled but not yet hydraulically fractured.

Besides oil, natural gas production reached another all-time high of 805,000 mcf per day. Helms said more gathering lines and gas processing capacity are holding flared gas at 29 percent. That number is much higher than the national average, but down some from the all-time high of 36 percent of gas flared in 2011.