An Early Crack at Easy 2009 Profits

I only have two things to say on this first day of trading: Happy New Year and buy stocks.

Last year was certainly one to forget. Now, a change of presidential administration, an emerging trough in stock prices, and the growing investor confidence that comes with a new year. . . means it's time to get back on the horse and start buying energy stocks.

A second economic stimulus is coming down the pike. It will likely be ready to sign when Mr. Obama takes office. And it will lob about $850 billion at projects to create jobs and spur spending.

Most notably, the coming stimulus will focus on updating our severely outdated electricity grid. An article I wrote last week for Green Chip Review hones in on investment opportunities arising from a smart grid transition.

With these stocks about to take off, I thought this piece would be of interest to Energy & Capital readers as well.

I've been talking about the smart grid for well over a year now.

Two Novembers ago, I wrote about three companies doing business in the realm of energy efficiency, which now goes by the pet name 'smart grid.'

As it happens, I may have had my prognosticating dial set a year too early.

Those three companies got swallowed up by the financial tsunami that was 2008, losing more than half their value, which is even worse than the Dow and the S&P. Here's the chart: 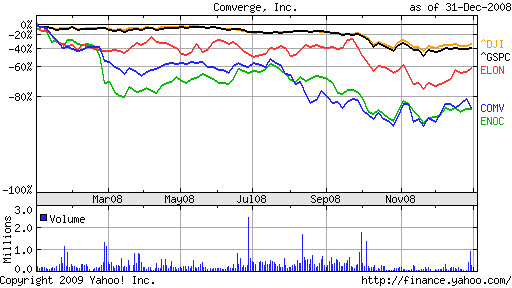 Now, 2009 is being hailed as the year of the smart grid. It may be too early to tell, but with a change in administration, a renewed focus on energy efficiency, and continued tightness in the credit markets, things are looking good when it comes to investing in the smart grid in 2009.

What is The Smart Grid?

As I've written many times, there is really no single way to define the smart grid. It basically comes down to overlaying the power delivery system with an information system that allows a utility and its consumers to constantly monitor and adjust electricity use.

Right now, the process of getting electricity to your house from the generation point is antediluvian. All you know is that the electricity is on. You're happy as long as the drinks are cold and the TV is on.

The same holds true for the utility. In fact, they usually aren't aware of a power outage until they receive calls from their customers. Even then, they aren't able to pinpoint the source of an outage without sending out an entire crew.

It's primitive. But it's changing. And this change is going to be profitable.

The benefits of a fully functioning smart grid are innumerable.

One of the earliest to emerge is a niche smart grid segment called demand response. Demand response is the voluntary reduction of electricity demand in response to grid instability, high wholesale prices, or peak load.

So, for example, all the homes in your neighborhood could be part of an EnerNOC program that voluntarily reduces demand from your heaters and air conditioners when the grid needs excess capacity. Of course, you're entitled to compensation for that service, and could either receive a check or a reflective discount on your utility bill.

This type of program is going to be commonplace in a few years. It's beneficial because during times of peak demand, utilities can pull from the grid instead of turning on a coal- or natural gas-fired peaking plant. Not only are those plants expensive to run, they're emissions will also have rising costs as a cap-and-trade scheme is established to curb greenhouse gas emissions.

Other companies are engineering products that allow consumers to monitor every aspect of their home's energy use. . . even when they're not home.

Start-ups like Greenbox—from the guy who brought us Flash—are taking a networking approach to the smart grid, designing systems that allow you to turn on your dishwasher from a remote location, when you know the electricity price is cheapest. You can also turn your lights on and off and adjust your thermostat to maximize efficiency.

For utilities, the advent of wireless communication embedded in substations, transformers, and other power management equipment will mean increased efficiency and reduced costs, as maintenance schedules and warning signals become automated.

Profiting from the Smart Grid

Many companies are in hot pursuit of commercial viability in the smart grid sector. And investors seem to think there is room for plenty of them.

Over the past 10 quarters, smart grid companies raised slightly under $30 million per quarter at the venture level. But last quarter (Q3 2008), a record $202 million flowed into the sector. . .a clear indication of its future profitability.

Leading smart grid recipients of venture capital in the third quarter include:

On the publicly-traded side, Comverge, EnerNOC, Echelon, and PowerSecure International remain the few pure plays. Exposure can also be had through Itron, GE, Siemens, Honeywell, and Johnson Controls.

But stay cautious. Even though this sector is slated to be hot in 2009, the financial waters are still murky. You have to know which companies stand to offer you the best returns, and then decide when to buy them and sell them.

The Alternative Energy Speculator takes all the guesswork out of investing in clean technology. Thousands of readers already enjoy up-to-the-minute updates telling them when to buy and sell stocks.

We already have a few smart grid plays in the portfolio, but I'll be adding more to take advantage of their pending popularity in the coming year.

Plus, I'm offering a special year-end discount. Sign-up now and I'll knock $50 off the normal subscription price. And you'll get a free copy of Green Chip's new book, not to mention all the profits that the cleantech sector has to offer.

PS. This end-of-year discount will only be in effect the next few days. After that, due to increased research requirements to cover the expanding infrastructure opportunity, Alternative Energy Speculator will be sold at its retail price of $499 per year. This reflects a major change, as the Speculator has sold at an introductory discount of $199 thus far. This is your last chance to join thousands of other investors at a rate below retail.