This Dutch Company Is Taking the Natural Gas Sector by Storm

The greatest — and most ironic — thing about Chicago Bridge & Iron is that they aren't in Chicago. . . don't build bridges. . . and have very little to do with iron.

What the company does do, however, is all the rage. The Netherlands-based engineering company makes infrastructure for natural gas storage and transportation. This sector is so hot that they've picked up six contracts since September — including one just yesterday.

Around the world, the total known reserves for natural gas are expanding rapidly. In the United States, known reserves have increased 48% over the past three years, due to new drilling techniques called fracting. A natural gas consortium is running television ads saying that we have a 100 year supply of this clean plentiful energy.

China has entire city fleets of buses and taxis that run on compressed natural gas. China also has massive amounts of coal-based methane — methane that sits on top of coal fields. Again, new technology is allowing China to utilize their resources.

Russia's Gasprom (OGZD.IL) has more BTU's in natural gas than Saudi Arabia has in oil, and is now exporting natural gas to California from Siberia.

T. Boone Pickens and his Clean Energy Fules Corp. (CLNE) are running port facilities where every vehicle is based on natural gas. He has had meetings with President Obama and Al Gore on the subject.

Honda has a natural gas car available for sale today that you can plug into a gas pipe in your garage.

Peterbuilt is selling natural gas long haul trucks because it makes fiscal sense to run on NG, as it's cheaper and cleaner. . . 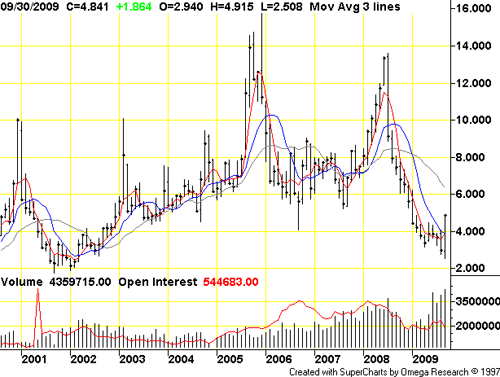 But what you can buy is the one company that builds storage and transfer stations.

Chicago Bridge and Iron (CBI:NYSE) is an engineering company that produces the infrastructure for natural gas storage and transportation. I mentioned earlier that the company has picked up six new contracts since September — these include a $70 million deal they picked up last week to build a facility in Siberia, and another $100 million deal on Friday.

Chicago Bridge & Iron Co. NV, an energy-infrastructure construction company, on Friday said it received a contract worth more than $100 million from UGI LNG Inc. to engineer and construct the expansion of a Temple LNG peak shaving facility near Reading, PA.

Under the contract, CB&I will be responsible for the addition of a new 50,000 cubic meter liquefied natural gas storage tank and related processing facilities designed to provide 150 million cubic feet of natural gas per day during peak demand periods.

As you can see in the chart below, they have sliced through all resistance and appear to have none until they hit $30. They have a decent balance sheet, a P/E of 11, and should continue to grow with the expansion of the natural gas industry: 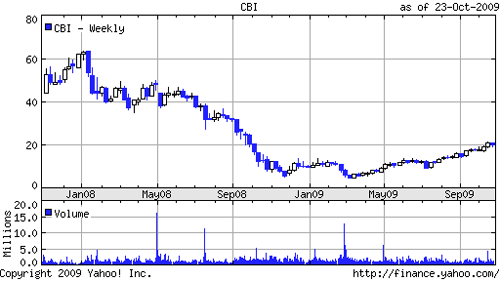 The company has a conference call today, and I think the sentiment will be bullish.

2010 Natural Gas Forecast
Energy and Capital's Keith Kohl offers readers his 2010 natural gas forecast and gives readers an easy way to get in ahead of the herd.
Gains for Oil and Gas Stocks Across the Board
Energy and Capital editor Keith Kohl reviews the week in energy and welcomes the sight of gain for oil and gas stocks.
Hydrogen Fuel Cells: The Downfall of Tesla?
Lithium has been the front-runner in the battery technology market for years, but that is all coming to an end. Elon Musk is against them, but Jeff Bezos is investing heavily in them. Hydrogen Fuel Cells will turn the battery market upside down and we've discovered the tiny company that is going to make it happen.